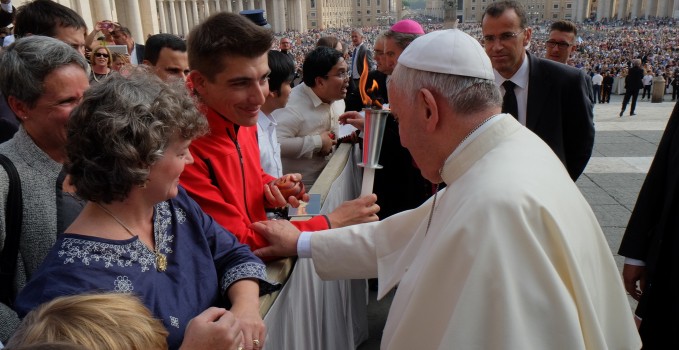 Every part of the Church, and many others outside of her – believers or non-believers – have received Pope Francis` clear and hope-filled words. They are also words that motivate us to assume the responsibility we all have to build a world in accordance to the Will of God, in the strength of the Spirit and through the way of Christ. Cardinals and bishops, priests, men and women religious, novices and seminarians, families, the youth and elderly, communities and institutes have received this challenge to go out “onto the street” to take – not a utopian hope – but concrete deeds in living evangelization projects to all men and women wherever they may be. And if they are on the “outskirts” then we have to go there, with all the risks and dangers it may include. He repeats to us constantly: I prefer an injured church, because she goes out to serve, to a Church that is sick because of her self-absorption. Testimony to this can be found in the section of Schoenstatt.org where on a weekly basis texts are selected which motivate us on our own pilgrimage. Undoubtedly, because we are the Church, these words are also directed to us. How happy must our Father not be with this missionary impetus which is given to us from the very heart of the Church! (Fr. José María García)

An examination of conscience will do us good. What category of Christians do I find myself in? In the first, among those who listen to the many cries asking for the help of salvation? Am I concerned only with my relationship with Jesus, closed off, selfish? Do I belong to the second group, among those who distance the people from Jesus as a result of the lack of coherence in my life, a lack of testimony, by being too attached to money or rigid? Do I distance people from Jesus or do I belong to the third group, those who hear the cry of so many and I help them draw nearer to Jesus? Each of us can answer these questions in our hearts.

When a Christian is attached to possessions, he creates a bad impression of a Christian who wants to have both things: heaven and earth. This is the cornerstone, precisely, this is what Jesus says: the cross, persecution. This requires self-denial. From a human perspective, following Jesus is bad business: it requires service. Jesus said: if the Lord allows you to be the first, you should act as if you were the last, that is, by serving. And if the Lord allows you to have possessions, you should act in service, that is, for others. There are three things, three steps that distance us from Jesus: riches, vanity and pride. This is why wealth is so dangerous, because it immediately leads to vanity and you believe that you are important. And when you believe you are important, your grow a big head and you are lost.

Journalist: Do you cry? Francis: “When I see human dramas. Like the other day when I saw what is happening with the Rohingya people, who are floating on these boats in Thai waters and when they approach land they are given a little bit of food and some water and then they are chased off again into the sea. This moves me deeply, these kind of dramas. Then, sick children. When I see what they here call “rare diseases” that are produced by carelessness for the environment, this moves me completely. When I see these creatures and say to the Lord: “Why them and not me?” When I go to the prison I’m also moved. Of the three Holy Thursdays I’ve experienced, I have been to prisons twice, one of them a juvenile detention centre and the other was Rebbibia Prison. And later, I went to the prisons in other Italian cities that I visited, had lunch with the prisoners and when they were talking to me, the thought entered my head: “It could have been me in here.”

You cannot build community without closeness. There is no peace without closeness. You cannot do good without closeness. Jesus could have told him: “Be healed.” No, he drew close and touched him. What’s more, at the moment that Jesus touched the unclean man, he became unclean. And this is the mystery of Jesus: to take our uncleanliness upon himself, our impurities. Paul expressed it well: “although he was in the form of God, did not count equality with God a thing to be grasped, but emptied himself.” Further on Paul goes on to say: “he became sin.” Jesus became sin. Jesus excluded himself, he took the impurity upon himself to draw closer to us.

Let us remember these three words. They are a sign: do, listen, speak. Someone who is all talk and no action is not a true prophet, he is not a true Christian and in the end everything will collapse: he is not firmly rooted on the rock of God’s love, he is not firm like the rock. Someone who knows how to listen and then does based on the listening, with the strength of another’s words, not his own, he remains firm. This is a humble person who doesn’t seem important, and how many of these great people we have had in the Church! How many great bishops, how many great priests, how many great faithful people who know how to listen and from listening do…these great people know how to listen and do based on their listening because their confidence and strength stand on the rock of the love of Jesus Christ.