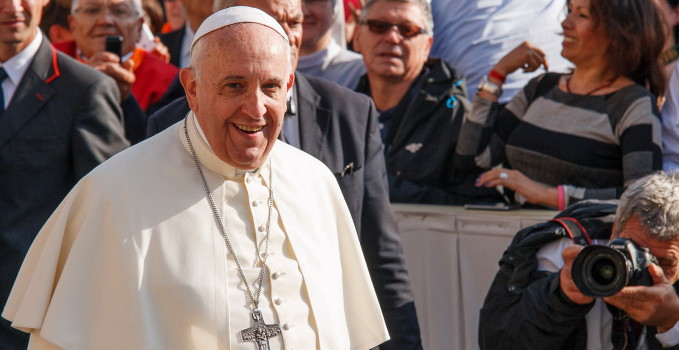 Pope Francis took part in the opening of the Milan 2015 Expo, which this year has as its theme “Feeding the planet, energy for life,” via a live television connection on Friday 1 May. He called on the participants to use this opportunity to promote the globalization of solidarity, especially toward the million “starving faces” of many brothers and sisters who suffer from this scourge. Full text of the Pope’s speech

I am thankful for the opportunity to unity my voice with those of the many people participating in this opening. It is the voice of the Bishop of Rome, who speaks in the name of the people of God who pilgrim through the entire world; it is the voice of the many poor who are a part of this people and who seek to earn their daily bread in a dignified manner with the sweat of their brow. I would like to be the spokesman for all of our brothers and sisters, Christians and non-Christians, whom God loves as children and for whom he has given his life, has shared the bread that is the flesh of his Son become man. He taught us to ask God the Father: “Give us today our daily bread.” The Expo is an opportune occasion to globalize solidarity. Let us seek not to waste it without giving it its full value.

In particular, we are united in the theme: “Feeding the planet, energy for life.” We should also thank the Lord for this, for the choice of such an important theme, so necessary…with this, let it not be just a “theme,” but that it will always be accompanied by the conscience of “faces”: the faces of millions of people today who are hungry, who will not eat in a dignified manner, in a way that dignifies a human being. May each person – from today – each person who visits the Milan Expo, crossing those wonderful pavilions, may be aware of the presence of those faces. A hidden presence but which, in reality, should be the true protagonist of this event: the faces of the men and women who are hungry, who are sick and who die as a result of a diet that is lacking and harmful.

The “paradox of abundance” – an expression used by St. John Paul II while addressing the FAO (Speech at the 1st Conference on Nutrition, 1992) – still continues, despite efforts undertaken and some good results. Also the Expo, in some way, is part of this “paradox of abundance” if it obeys the culture of waste and throwing away, and does not contribute to a model of equitable and sustainable development. Therefore, let this Expo be an opportunity for a change of mentality, to put an end to thinking that our daily actions – in each degree of responsibility – do not have an impact on the lives of those, close or far, who suffer hunger. Think of the many men and women who suffer from hunger, especially the multitude of children who die of hunger in the world.

There are other faces that will have an important role at the Universal Expo: the many operatives and researchers in the food sector. May the Lord grant each of them wisdom and courage, because they have a great responsibility. My hope is that this experience will allow entrepreneurs, business people, academics feel part of a great project of solidarity: to feed the planet with respect for each man and woman who lives in it and with respect for the natural environment. This is a great challenge to which God calls humanity of the twenty-first century: to finally put an end to the abuse of the garden that God entrusted to us, so that all may eat of the fruit of this garden. To take up this project with the full dignity for the work of those who produce and those who investigate the food sector.

But everything starts with this: noticing the faces. And then I do not want to forget the faces of all those workers who have prepared the Milan Expo, especially the more anonymous; the most hidden, who thanks to the Expo have earned their daily bread to take home. Let no one be deprived of this dignity. And that no bread is the fruit of the undignified work of man!

May the Lord help us to accept this great occasion with responsibility. May he give us Himself, who is Love, the true “energy of life”: love to share the bread, “our daily bread,” in peace and brotherhood. And that each man and woman does not lack bread and the dignity of work. Thank you.