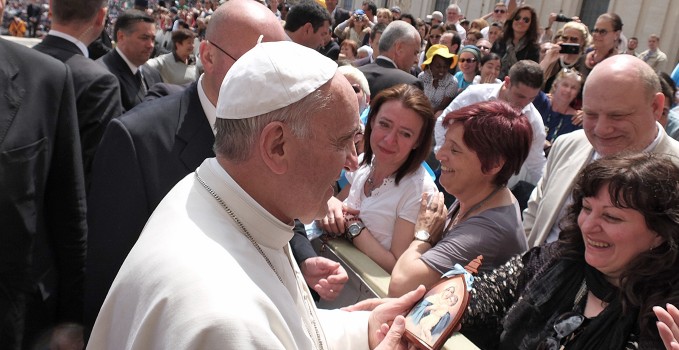 Old age “also contains a grace and a mission, a true vocation”

FRANCIS IN ROME, vis. The value and importance of grandparents in the family was the theme of Pope Francis’ catechesis at last Wednesday’s general audience in St. Peters Square. First of all, Pope Francis said that he identified with the elderly because he is the same age as them. “When I was in the Philippines,” he said jokingly, “the Filipino people greeted me, saying: ‘Lolo Kiko,’ – that is, Grandfather Francis,” and emphasized that even though society has a tendency of casting aside the elderly, God doesn’t do this. On the contrary, he calls people of all ages to follow him because old age “also contains a grace and a mission, a true vocation of the Lord.” “We can thank the Lord for the benefits received and fill the void of ingratitude that surrounds him,” suggested the Pontiff. “We can intercede for the expectations of the new generations and give dignity to the memory and the sacrifices of the past ones. We can remind ambitious young people that a life without love is an arid life. We can say to fearful young people that anguish over the future can be overcome. We can teach young people too enamoured with themselves that there is more joy in giving than in receiving. Grandfathers and grandmothers make up the permanent ‘choir’ of a great spiritual shrine, where the prayer of supplication and the singing of praise sustain the community that works and struggles in the field of life.”

Complete text of the Pope’s catechesis

In today’s catechesis we continue the reflection on grandparents, considering the value and importance of their role in the family. I do so, identifying myself with these persons, because I also belong to this phase of age.

When I was in the Philippines, the Filipino people greeted me, saying: “Lolo Kiko,” – that is, Grandfather Francis – “Lolo Kiko,” they said! It is important to stress one thing first: it is true that society tends to discard us, but certainly not the Lord. The Lord never discards us. He calls us to follow Him in every age of life, and old age also contains a grace and a mission, a true vocation of the Lord. Old age is a vocation. It is not yet the moment “to rest on one’s laurels.” Without a doubt, this period of life is different those that preceded it. We also must somehow “invent it for ourselves” Because our societies are not ready, spiritually and morally, to value this moment of life fully. Once, in fact, it was not normal to have time at one’s disposal; today it is much more so. And Christian spirituality has also been caught somewhat by surprise, and an attempt is being made to delineate a spirituality of elderly persons. However, thanks be to God there is no lack of testimonies of elderly men and women Saints!

I was very moved by the “Day for the Elderly,” held here in Saint Peter’s Square last year. The Square was full. I heard stories of elderly people who spent themselves for others, and stories of married couples who said: “We are celebrating our 50th wedding anniversary; we are celebrating our 60th wedding anniversary.” It is important for young people, who tire easily, to see this. The testimony of fidelity of the elderly is important. And there were so many of them in the Square that day. It is a reflection to be continued, both in the ecclesial and civil realms. The Gospel comes to meet us with a very beautiful, moving and encouraging image. It is the image of Simeon and Anna, narrated in St. Luke’s Gospel of Jesus’ infancy. They certainly were old, the “old man” Simeon and the “prophetess” Anna who was 84. This woman did not hide her age. The Gospel tells us that they had been waiting for God’s coming every day for many years with great fidelity. In fact, they wanted to see him that day, gather the signs, and sense the beginning. Perhaps they were somewhat resigned that they would die before this but that long wait continued to occupy their whole life, they had no other important commitments than this: to await the Lord and pray. Well, when Mary and Joseph reached the Temple to fulfil the requirements of the Law, Simenon and Anna were suddenly moved, animated by the Holy Spirit (Cf. Luke 2:27). The weight of their age and the waiting disappeared in a moment. They recognized the Child, and discovered new strength for a new task: to give thanks and witness to this sign from God. Simeon improvised a very beautiful hymn of jubilation (Cf. Luke 2:29-32) – he was a poet at that moment – and Anna became the first preacher of Jesus: she ”spoke of him to all who were looking for the redemption of Jerusalem” (Luke 2:38).

Dear grandparents, dear elderly, let us put ourselves in the shoes of these extraordinary old people. Let us also become poets of prayer in a sense: let us enjoy searching for words of our own; let us recover those that the Word of God teaches us. The prayer of grandparents and the elderly is a great gift for the Church; it is richness! It is also a great injection of wisdom for the whole of human society, especially one that is too busy, too absorbed, too distracted. Someone must also sing the signs of God for them, proclaim the signs of God, pray for them! We look at Benedict XVI, who has chosen to spend the last stage of his life in prayer and listening to God! This is beautiful! Olivier Clement, a great believer of the last century from the Orthodox tradition said: “A civilization where there is no longer prayer is a civilization where old age no longer makes sense. And this is terrifying. We are in need first of all of elderly people who pray, because old age is given to us for this.” We are in need of elderly people who pray because old age is given to us precisely for this. The prayer of the elderly is a beautiful thing.

We can thank the Lord for the benefits received and fill the void of ingratitude that surrounds them. We can intercede for the expectations of new generations and give dignity to the memory and the sacrifices of the past ones. We can remind ambitious young people that a life without love is an arid life. We can say to fearful young people that anguish over the future can be overcome. We can teach young people too enamoured with themselves that there is more joy in giving than in receiving. Grandfathers and grandmothers make up the permanent “choir” of a great spiritual shrine, where the prayer of supplication and the singing of praise sustain the community that works and struggles in the field of life.

Finally, prayer purifies the heart incessantly. Praise and supplication to God prevent the hardening of the heart in resentment and egoism. How awful is the cynicism of an old man who has lost the meaning of his testimony, scorns the young and does not communicate the wisdom of life! Instead, how good is the encouragement that the elderly man can give to youth in search of faith and the meaning of life! It is truly the mission of grandparents, the vocation of the elderly. Grandparents’ words have something special for young people. And they know it. I still always carry with me in my Breviary the words my grandmother wrote to me on the day of my priestly Ordination, and I read them often and it does me good.

How I would like a Church that challenges the disposable culture with the overflowing joy of a new embrace between young people and the elderly! And this is what I ask the Lord today, this embrace!