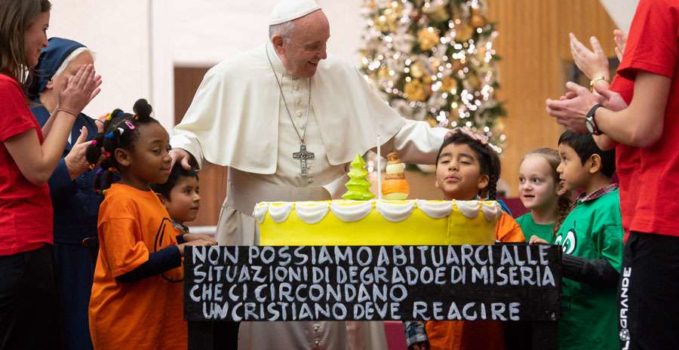 The Santa Marta Pediatric Clinic, which cares for children from different parts of the world daily, organized a celebration in anticipation of the Pope’s 82nd birthday held at the Vatican in the St. Paul VI Hall.—

The Holy Father’s birthday was Monday, December 17th, Sunday, he shared an hour with 150 children, who attend the free clinic, along with their parents, families, doctors, and volunteers who help there. Sr. Antonietta Colacchi of the Daughters of Charity leads them.

Francis arrived at the St. Paul VI Hall at 10:30 am, and he listened to the volunteers and families’ testimonies. The Pope did not want to sit in the seat he usually uses there, but instead, he sat next to Sr. Colacchi in one of the hall’s levels. Two mothers, a Peruvian and a Muslim, shared with the Pope their experience of how their children were taken care of at the clinic, which welcomes people from allover the world regardless of religion or lack of religion,.

One of the children, little Giacomo, wished the Pope a happy birthday on behalf of his companions.

The participants also sang “Please, I’m sorry, thank you,” a song Ludovico Sacco, Director of the Rovereto Choir, created for the occasion. The title of the song comes from the words the Pope has used to encourage family life.

A video was also viewed that showed the daily work at the clinic, and they presented the Pope with several cakes, one of St. Peter’s cupola, and another one with 82 candles the Pontiff blew out after they sang Happy Birthday.

The cake with candles was placed on a table that had the following phrase:

“We cannot become accustomed to the situations of degradation and misery that surround us. A Christian should react.”

The Pontiff also gave the children some Christmas bags filled with candy. The participants also shared a lunch in which different gifts were given, and every family received a panettone, a classic Italian Christmas bread.

In his improvised words before leaving to lead the Angelus, Pope Francis said that we can learn how to “lower” ourselves to understand people and life from the children. We make your daily request our own:

And please, do not forget to pray for me.