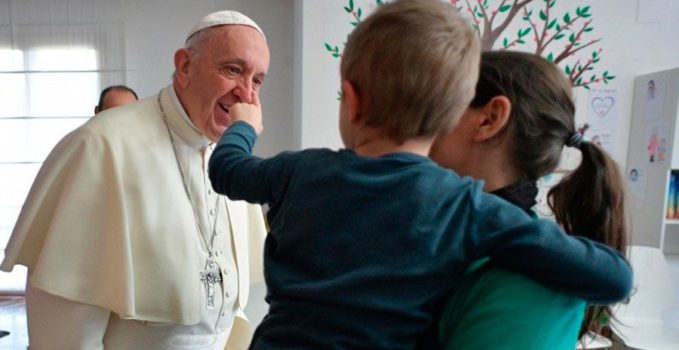 FRANCIS AND WORKS OF MERCY, Álvaro de Juana via ACIprensa •

Pope Francis once again left the walls of the Vatican to visit “Casa di Leda,” a residence that was confiscated from organized crime and now shelters female prisoners and their children. Continuing with the “Mercy Fridays” that the Holy Father began during the Jubilee of Mercy in 2016, Francis left the Vatican at 4.00pm (Roman time) accompanied by Mons. Rino Fisichella, the President of the Pontifical Council for Promoting New Evangelisation. — This is the first house of its kind in Italy and the Lillo de Mauro, who is responsible for the house, told the Holy Father about his efforts to transform the house and the importance of giving it back to society as a space that is socially beneficial.

“Dear Holy Father, we are invisible,” he said with great emotion when he welcomed Pope Francis.

De Mauro read Francis a letter describing the conditions of these children: “We are some of thousands of boys and girls, children of parents who are locked away in Italian prisons, who live with them in the prisons or go to prison to visit them. In order to defend the dignity of our imprisoned parents, they tell us lies, making us believe that we are going to a college or a workplace,” according to a note published by the Holy See.

“We are prisoners’ children”

“We are persecuted, our privacy is invaded by unknown adults who take our teddy bears, the simple games that are our friends, to open them, monitor them, and sometimes they take our underwear to make sure that our mothers have not hidden drugs in our clothes,” the letter continued.

In addition to stating that for “many we are statistics,” the letter also recognised that “in order to defend ourselves, we become aggressive and difficult, but we are not bad, it is the others who don’t see and want us like this: we are prisoners’ children.”

Currently, there are five young mothers living in this house, aged between 25 and 30 years, some of them are gypsies, but there is also an Egyptian and an Italian woman.

The Holy Father spoke with some of the mothers and their children, as well as with the personnel who were also at the residence. He played with the children and gave them chocolate Easter eggs, which they received joyfully.

The mothers gave Pope Francis some of the crafts that they made in the house.