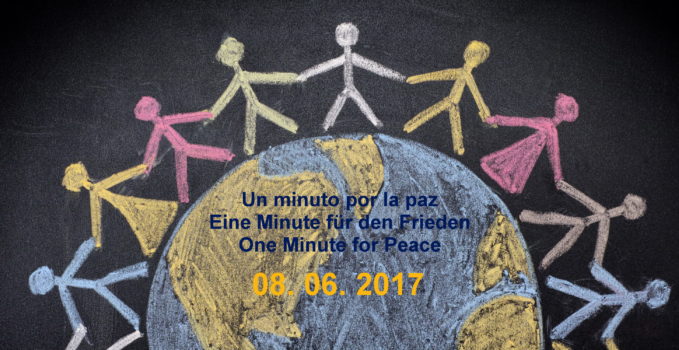 Posted On 8. June 2017 In Francis - Initiatives and Gestures

At the end yesterday’s General Audience, Pope Francis called everyone to unite themselves to the “one minute for peace” initiative, which will take place on Thursday 8 June at 1300, Roman time, and said that it recalls the meeting in the Vatican Gardens with then Israeli President Shimon Peres and Palestinian President Mahmud Abbas on 8 June 2014.

“Tomorrow at 1300, several countries will renew the initiative: “One minute for peace.” This is a short moment of prayer on the anniversary of my meeting with deceased Israeli President Peres and Palestinian President Abbas on 8 June 2014. Our times need so much prayer – Christians, Jews and Muslims – for peace,” said the Pontiff.

“A minute for peace is an project started by the International Forum for Catholic Action. Those who want to join this initiative, can do so by praying at 1300 on 8 June, doing so alone, in a group, at home, at work or school, or in a place of prayer.

Pope Francis concluded with an invitation for the faithful to call on “Mary, the Mother of Jesus, Queen of Peace.”

The intention is that today at 1300, each person stop their daily activities and dedicate a minute to reflecting, praying and committing themselves to peace in the word, each according to his own tradition. Wherever they may be – on the street or a church, in their homes, with the family, at school, at work, in the factory or the fields, in their neighbourhoods, or at university.

The “One minute for peace” initiative coincides with Pope Francis intention on the pulse of time (translation coming soon) and his monthly intention that the leaders of nations may commit to put an end to the arms trade, which destroys so many innocent lives.