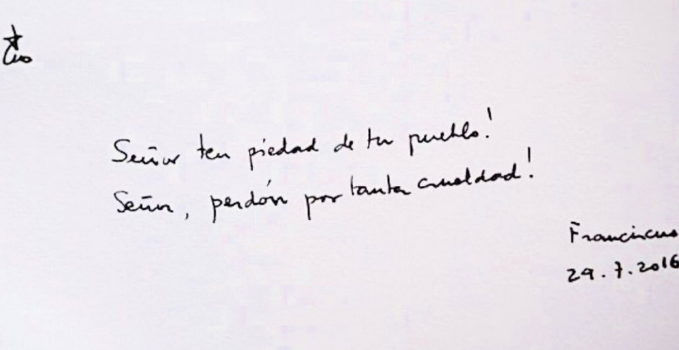 Lord, have mercy on your people. Lord, we ask pardon for such cruelty

“Lord, have mercy on your people. Lord, we ask pardon for such cruelty.” This was the message Pope Francis left in the visitors’ book in Auschwitz-Birkenau, the only words he pronounced in this place where horror surpasses words, the imagination, capable of human thought. It is a place that leaves us powerless, destroyed, afraid, horrified at what human beings were capable of doing to other human beings.

The Pope did not say anything. He took his time. He simply remained there, in silence, in prayer. For many minutes, Pope Francis stood in the symbolic place of the immense tragedy of the Holocaust. In Auschwitz and Birkenau, which less than 70 years ago saw the madness of man’s hatred towards man, the Pontiff rendered homage to the victims of “such cruelty,” as he wrote in the visitors’ book at the extermination camp, which accompanied his prayer for God’s mercy and forgiveness. Alone, walking slowly, Francis crossed the entrance gate and passed under the sadly famous sentence “Arbeit macht frei” (work will set you free), also known at the other concentration camps and by the many Schoenstatters who have crossed the threshold of the Dachau concentration camp, where Joseph Kentenich lived for so long in conditions that were only minimally less cruel and inhumane.

Then, Francis remained more than a quarter of an hour seated in silent recollection in front of the barracks for the deportees. He kissed one of the scaffolds built in the camp, greeted some of the survivors, placed his hand on the wall of death and went into the cell that held Maximilion Kolbe, the Franciscan who was declared a saint in 1982 by Pope John Paul II. He then went to the nearby camp of Birkenau, passed next to the headstones engraved in the 23 languages spoken by the prisoners, listened to the chant of Psalm 130, sung in Hebrew by a rabbi and greeted a group of survivors and the “just among the nations.”

That evening he told the people gathered in front of the Archbishop’s Palace in Krakow:

“This morning there was another painful thing: I went to Auschwitz, to Birkenau, to remember the suffering of seventy years ago… Such pain, such cruelty! Is it possible that we men, created in the image and likeness of God, are capable of such things? These things were done. I don’t want to make you sad, but I must speak the truth.”

A commentator on Jewish radio in Buenos Aires said that they felt he interiorized the holocaust more than if he had spoken. He made a comparison with the visit of other Popes and said that this silence was, for the Jewish people, a cry.

“A great gesture from the Pope,” said Henryk Jarczyk, a journalist for ARD, Germany’s public television channel. “Sometimes there are no words. Sometimes all one wants is to remain in silence in the face of a particularly cruel situation. Reflect in silence and give a sign through this. Show that emotion and terror can also be demonstrated by silence. Francis highlighted this, and in such a way. His loud silence expressed much more than any speech proclaimed here.

What counts is not the opinions and commentaries about this place of unbelievable suffering. What counts is the actions outside of the area of the concentration camp. And Francis draws attention to these as well. His unequivocal call for the Polish government to accept refugees is one more of these many examples.

The way in which the Pope remembered the victims at Auschwitz and Birkenau, and all the victims of injustice and violence, is unprecedented. His emotion is therefore all the more authentic, which adds importance to his call to welcome refugees. Let it not happen that one day, if this voice is silenced, the Mediterranean suddenly becomes humanity’s biggest cemetery.” 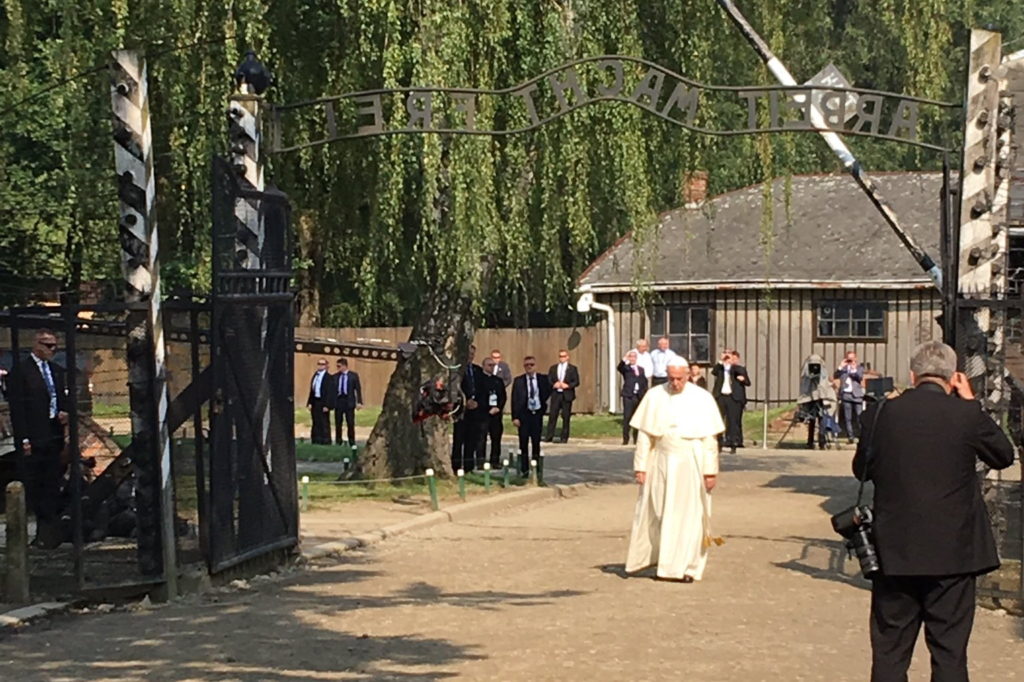 Only what happens in our hearts

Francis walked through Auschwitz with his head and back bent, with a serious and sad face, as if he was carrying the cross of this place on his own shoulders and the cry of the victims in his heart. We remember his words at Lampedusa: Who among us has cried for the fathers, mothers, and children in the Mediterranean?

He calls us with his silence to the avalanche of words proclaimed again and again in the media and on social media, the multitude of hashtags and the abundance of speeches, commentaries and explanations, valuable words that lose their meaning with over use or that we transform into sterile slogans.

He calls us in the time that he “wasted” in being alone, waiting until the body and soul are in this place and can interiorize the things that happened here.

He calls us perhaps even more by allowing all it pain to go through his soul and heart. Only what passes through the heart can become ours and become fruitful, says Fr. Kentenich. Pope Francis challenges our indifference, our tendency to close our eyes and hearts to pain, to joy, to the real stories of life, the concrete actions of others. He challenges our cold-heartedness that locks us into our own little worlds, that allows us to read — or edit or translate — a news report without it penetrating our hearts, without the truth bothering us. Pope Francis speaks so often about the culture of indifference that needs to be overcome. With his silence and the time he took to do this in Auschwitz, the Pope shows us the way.

Cruelty did not end in Auschwitz-Birkenau

No one better than Pope Francis to explain the last challenge of this visit:

“Cruelty did not end at Auschwitz, at Birkenau: today too, people are tortured; many prisoners are tortured at once, to make them speak… It is terrible!

Today there are men and women in overcrowded prisons; they live – I’m sorry – like animals. Today there is this cruelty. We say: yes, we saw the cruelty of seventy years ago, how people were put to death by being shot, or hanged, or with gas. But today in many places in the world, where there is war, the same thing is happening.

Jesus came into this reality to carry it on his shoulders. And he asks us to pray. Let us pray for all the Jesuses today in the world: the hungry, the thirsty, the doubtful, the sick, those who are alone, those who feel the weight of many doubts and crimes. They suffer so much…

What I am saying to you is a little sad, but it is the truth. But it is also true that Jesus carried all these things upon himself. Our sin too.

All of us here are sinners, all of us bear the weight of our sins. I don’t know if anyone believes he is free of sin… If anyone thinks he is not a sinner, let him raise his hand…

We are all sinners. But he loves us, he loves us! And so let us – as sinners, but as sons of God, sons of our Father – let us all together offer a prayer for these people who suffer so many terrible things today in the world, so much evil.

And when there are tears, the child looks for its mother; we too, sinners, we are children, we look for our Mother, so let us pray all together, each in his own language.

May the Lord bless you, in the name of the Father and of the Son and of the Holy Spirit

I wish you a good night, a good rest. Pray for me! And tomorrow we shall continue this beautiful World Youth Day. 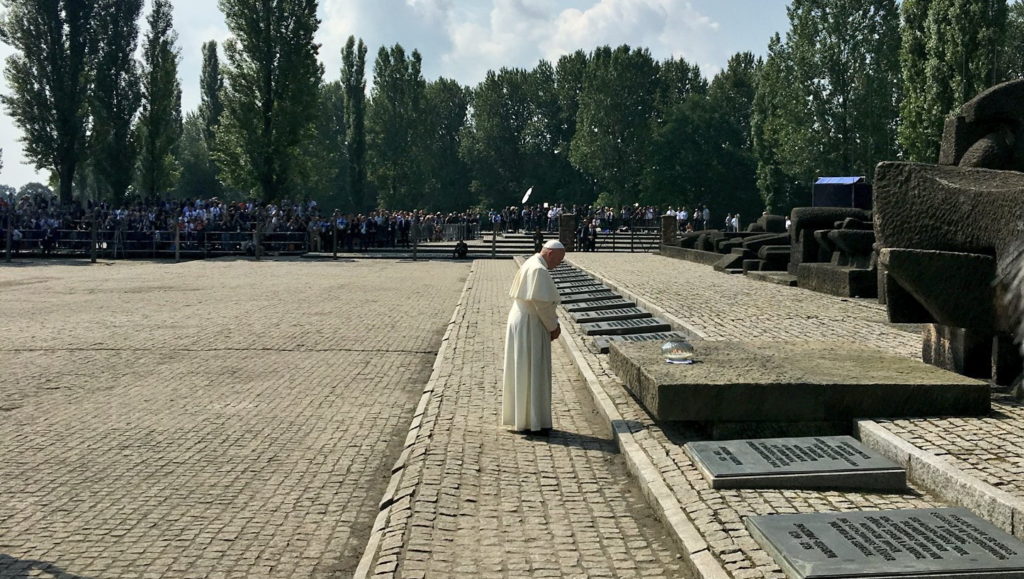 All of the Holy Father’s texts during WYD2016
Photos: @https://twitter.com/antoniospadaro