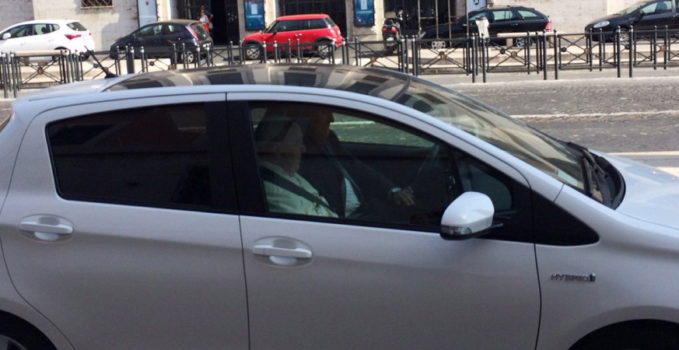 Surprise, the Pope is at the door!

Pope Francis, in the midst of reforming the curia and the structures of the Holy See, was seen this Wednesday morning, 13 July, inside a pearl-coloured Toyota Yaris on his way (after a dental appointment) to the fourth floor in Conciliacion 1 road.  This is where, among other offices, the Pontifical Commission for Latin America (CAL) is located.  Surprise, the Pope is at the door!

The CAL staff and their supervisors couldn’t believe it. “Incredible.” Pope Francis decided to “pop in” to the CAL offices at 9.10 in the morning.  The members of the commission and their staff had to interrupt a preparation meeting for the Continental Jubilee of Mercy in Bogotá.

In good Latin American tradition, the guest or the visitor takes priority.  But even more so if it’s the “Vicar of Christ” himself! “Good morning! Can I come in?” “Holy Father! What a wonderful surprise!”

An employee announced his arrival with a trembling voice: “The Holy Father! Quick, the Holy Father!” They thought he was calling on the phone, except that they could hear the sound of his orthopaedic shoes coming down the corridor with his unhurried pace.

“Good morning, do you have time to chat a little?” Francis asked without wanting to interrupt or appearing to be inopportune. Those present were gratefully surprised and attentive.

Guzmán M. Carriquiry Lecour, the CAL vice-president, came out to meet him and to host the unexpected guest.

The police officer who accompanied the Pope commented to the surprised CAL staff that he brought Francis by car after a visit to the dentist at the medical centre inside the Vatican when the Bishop of Rome decided to “pop in” and greet them before returning to his residence in Santa Marta.

The police officer said that it might be “complicated” (mostly because it was just the two of them and he feared for the Holy Father’s safety). “I am the Pope, don’t worry, we are in God’s hands,” he replied.  They set out, according the reconstruction of events on the CAL website.

After the visit, Pope Francis got into the passenger seat of the car. “The Holy Father’s companion added with a smile that this was the “first prank” of this kind that the Pope pulled.

Pope Francis has cancelled the general audiences due to the summer heat, but does not stop working and “popping in” to “surprise the Vatican staff.”

CAL was founded in 1958 and answers to the Congregation of Bishops in the Vatican. This commission deals primarily with “advising and helping individual Churches in Latin America.”