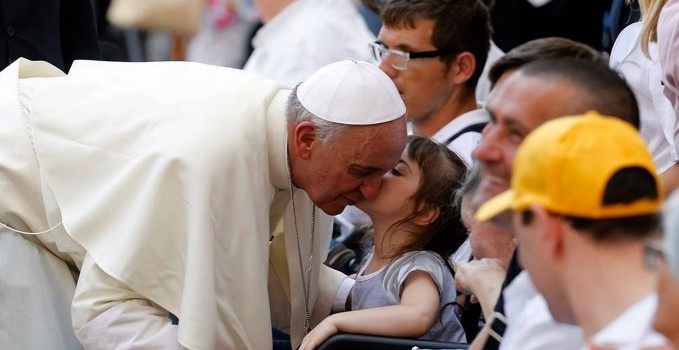 A “sign of mercy a month” during the Jubilee of Mercy

Dining halls for the poor, dormitories, evening classes, shelters, family guidance centers, and centers for reintegration of convicts– an initiative a month Rome. In the Vatican dicastery for the New Evangelization and in the Vicariate, they are working on twelve “signs of mercy” that Francis will give the capital during the Holy Year.

They will be gestures carried out by the Pope, and they will have a lasting effect in Rome. They are inspired by the spiritual and corporal acts of mercy indicated in the Gospel. That is to feed the hungry, give drink to the thirsty, clothe the naked, give shelter to pilgrims, visit the sick, visit the prisoners and bury the dead.

At the conclusion of the Jubilee, these permanent structures will have “practical use” in the charity and volunteering sectors. The objective is to confront the situation of the peripheries. In the Curia, the organizers should deal with the bureaucratic and administrative standstill of the Italian capital. People are needed to take care of these operations.

The authorizations and changes of venues and lands require signatures on records that none of the municipalities grant because of judicial investigations and the uncertainties about the fate of the current city government.

The plan for Francis’ initiatives seeks to impact the needs of the weakest, following the model of the Center for the Poor that the Pope ordered to be created next to Saint Peter’s Square. Places are being sought in order to carry them out. Some locations and areas have already been identified that conform to collective needs.

They are concrete signs of mercy that will remain even after the Holy Door of the Jubilee is closed once again.

For its part, the Vatican acted immediately in the organization, participating in the meetings with the government and authorities of Rome.

Through the Jubilee, the Pope wants to take “mercy to the daily life of the Church, through everyday gestures,” explained Archbishop Rino Fisichella, minister of the New Evangelization and the person in charge of the Holy Year. Record time, agile planning that is concentrated on the Faith. During the Holy Year, the Exposition of Blessed Mother Teresa of Calcutta and Padre Pio’s relics in Saint Peter’s Basilica could be possible.

How can one not think about the 100 houses of solidarity in what remains of Schoenstatt’s Jubilee 2014?

Jubilee Year of Mercy explained by Pope Francis (in Spanish)