Pray for me! – A “Prayer Rally” for Pope Francis

GERMANY, mda. Cardinal Sin, the former Archbishop of Manila, always made a public appeal for prayer, known as a “Prayer Rally”, for important intentions. In 1986 two million Philippinos walked through the streets praying the Rosary for the end of the Marcos dictatorship, which took place peacefully soon afterwards. Under the heading “Prayer Rally” people are gathering physically and virtually in these days to pray for the Christians in Iraq, or for the girls who have been abducted in Nigeria. Karin Schmitz from Sankt Augustin near Bonn has now started an initiative she has called a “Prayer Rally for Pope Francis”. On a multilingual website she encourages people very simply to pray for Pope Francis. 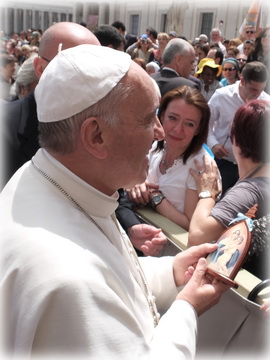 “I would now like to give you the blessing, but before that I ask you to do me a favour. Before the Bishop blesses the people, I ask you to invoke the Lord to bless me: The prayer of the people that asks God to bless their Bishop. In silence I ask you to pray for me.” With these words and this gesture Pope Francis began his service as shepherd, and many who experienced this moment were deeply touched and kept it in their hearts. It was the hour when the covenant in solidarity with Pope Francis was born, which the colleagues of schoenstatt.org consciously entered into a few weeks later on 31 May 2013. “Pray for me”, words that moved us not just on this 13 march 2013. Jorge Milla, journalist and student of Jorge Mario Bergoglia from the time when he lectured in literature and psychology in Santa Fe, included the “pray for me” in his list of “Bergoglisms” as he explained, “On account of the intensity with which he asks for it, he has gained the copyright to it.” He related how a declared atheist had spoken to him on one occasion and said that Pope Francis’ repeated request for people to pray for him confused him so much, that because he admired him so much as a person, he wanted to do what he asked without believing in the least that it would have any effect. He could simply not explain that this did him so much good that he wanted to continue. Jorge Milia remarked, “I believe that the repeated request has the same effect as water dropping on a rock can break it apart. I believe that this is what happens with the prayer Francis asks for. A friend of mine, who is also called Francis, told me, ‘if he managed to convince a lot of unbelieving Argentineans to pray for him, something happens that we are now experiencing – what will happen if he asks 1.200.000.000 sinners to pray for him?'”

Do what he asks – nothing more

What made a woman, who has never before designed a home page, initiate a worldwide Prayer Rally for Pope Francis? “On three consecutive days during Adoration I got the idea that it is important to call for a prayer campaign for Pope Francis”, Karin Schmitz related. “This idea became an urgent feeling, and although I know nothing about how to set up a home page, I had to do it. In the end I found two people who helped me to carry out my idea. I then had to find Catholic organisations that would be prepared to draw attention to this prayer project, called a “Prayer Rally”, on their home pages.

Karin Schmitz continued, “Difficulties and refusals were inevitable, but repeated joyful experiences motivated me again.” So, for a few days now you can find a reference to the Prayer Rally on the home page of Youth 2000.”

Then the Pilgrim Mother got involved

Every month Karin Schmitz is visited for three days by the Pilgrim Mother. “In August I felt urged to go on pilgrimage to Schoenstatt. I connected it in some way with the Prayer Rally. On 6 August I joined a pilgrimage with my mother. Before the Pilgrims’ Mass I prayed to the Holy Spirit and our Blessed Mother to help me to find someone who could help me with making the project known, or to help with translating things into Spanish.

In the afternoon I wanted to have a cup of coffee after the closing celebration on Mount Schoenstatt and went to a little cafe there. Shortly before I left the room a young woman came in to order something. She and the woman at the shop had difficulties in understanding each other, because neither knew the language of the other. Although the order had already been given, my mother asked me after I returned to speak to the woman again in English, because it would make her happy. It seemed a bit odd to me, but I did what my mother asked without realising what could result from it.

I was told that the woman came from Mexico, so her mother tongue was Spanish. She was going to be in Schoenstatt until Sunday, 10 August. Her month of volunteering would end on that date. She said she was prepared to translate the text into Spanish, and she did it that same day. She sent me the translation by email. Then a further surprise arrived: She said that she wanted to spread the Prayer Rally in Mexico, Spain, Argentina, Chile and Paraguay, and other Spanish-speaking countries, because thanks to Schoenstatt she had friends all over the world. … I am always happy to welcome the Blessed Mother, but this time my joy was particularly great, because through this experience I got a still deeper relationship to the Blessed Mother of Schoenstatt. Today, when I prayed the Glorious Mysteries of the Rosary before this picture, I got the idea at the third mystery devoted to the Holy Spirit to approach schoenstatt.org…”

Since the family that receives the Pilgrim Mother after Karin Schmitz was on holiday, the picture remained with her for three more days…

“My wish is that people who don’t yet pray for the Pope and his mission, and perhaps ‘chance’ upon the internet page, will feel inspired to join in praying for him,” Karin Schmitz explained. Very consciously, and completely in keeping with the intention of Pope Francis, it isn’t important to count the number of prayers. What, how much and how often someone prays is up to each person. There are a few suggestions on the website, but nothing else except the possibility of adding one’s name. “I hear again and again from people who tell me when they have inserted their name and take things more seriously, and it helps them to keep it up.”

At the moment the internet page of the Pope Francis Prayer Rally appears in German, English, Polish, French, Italian and Spanish. A translation into Portuguese is being prepared.

“Please, please, pray for me, and don’t forget to pray for me! Thank you very much.”

Pope Francis, 15 August, when meeting Asian Youth in the shrine at Solmoe