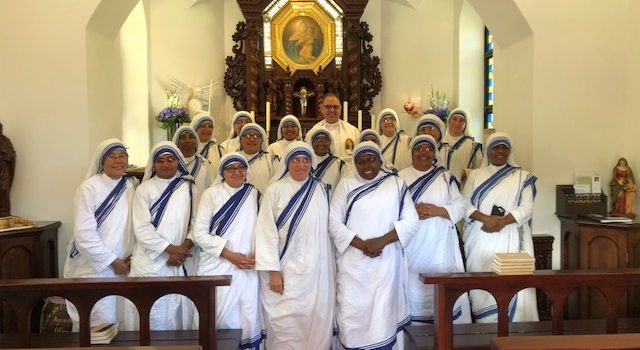 Sisters of Charity on pilgrimage to Costa Rica’s Shrine

On 20 April, eighteen Sisters of Charity that work in different Central American countries met at the Family of Hope Shrine in San José, Costa Rica. It was wonderful! They not only asked for an explanation of the genesis and theology behind the Unity of Cross but also the MTA picture, information about Fr. Kentenich, and about the shrine, and they all received a picture of the “Sleeping St. Joseph” as a gift. —

Pilgrims to the shrine 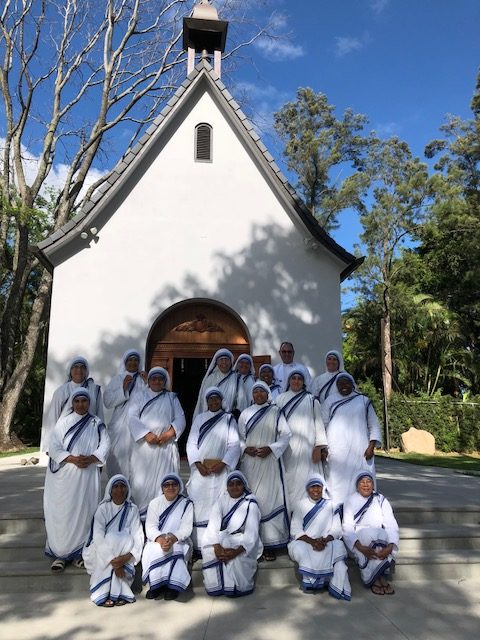 The Sisters of Charity of St. Mother Teresa of Calcutta, from the different houses of assistance in Central America, met in Costa Rica, and they began their retreat of spiritual exercises from Wednesday, 11 April to Wednesday, 18 of the same month.

During the Women’s Branch annual retreat, the provincial sister called Eugenia Cruz de Garnier to say that at the end of the retreat, the sisters wanted to go on pilgrimage at the Family of Hope Shrine, to receive the Eucharist, and they especially wanted to know more about the Movement.

Strengthening their own charism

Fr. José Luis Correa was waiting for them punctually at 7:00am. The greeting was cordial as he asked each one of the sisters about their country of origin (India, Bolivia, Mexico, Guatemala).

During the homily, Fr. explained the history and meaning of the Unity Cross that St. Mother Teresa adopted for the congregation of her missionary priests and Sisters of Charity. After the Eucharistic celebration, Father answered all the questions that arose, and each one was given a picture of the sleeping St. Joseph (a copy of the statue, found in Pope Francis’ apartment), for also entrusting their petitions when they have to make decisions, and to help them follow the charism of their congregation: in lovingly helping the poorest among the poor; then the pictures were blessed.

The laity’s strength in the Costa Rican Schoenstatt Family

The sisters were very impressed by strength of the Costa Rican Schoenstatt Family’s laity. They said goodbye gratefully, offering their prayers for the Schoenstatt Family, and they expressed their willingness to visit the Blessed Mother whenever they had the opportunity.

The relationship being formed between the Sisters of Charity and Schoenstatt is very beautiful. Everyone together by the hand of the Blessed Mother— like missionary and pilgrim children toward the Father and called to be holy in the world of today—as Pope Francis urges in “Gaudete et exsultate” (Rejoice and Be Glad).