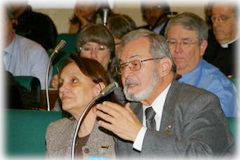 ROME, Elisabeth and Bernhard Neiser. The Pontifical Council for the Family wants to start a continuous process of communication between bishops, Church hierarchy, laity, and spiritual movements. For this, representatives from all over the world were invited for the Congress “The Christian Family, Subject of Evangelization” (La famiglia Cristiana, soggetto di evangelizzazione.) 200 people from 38 countries and 5 continents accepted the invitation, including 13 bishops and 7 staff of the Pontifical Council for the Family. The Congress met from the 25th to the 27th of November in Rome and ended with the “Vigil for the Right of Life” with the Holy Father in St. Peter’s Basilica.

187 reports were received for the preparation of the Congress. 66 reports were selected, of which 29 during the three days of the Congress were presented. Each day began with Holy Mass including homily, an opening talk and brief reports of approximately 15 minutes. After three or four statements, there was opportunity for discussion. The four conference languages (Italian, English, Spanish and French) were simultaneously translated.

Cardinal Ennio Antonelli, President of the Pontifical Council for the Family, expressed in his opening talk the desire that the good experiences, which were going to be reported in the course of the Conference, be fruitful in the family pastoral of different countries. A pastoral of truth, holiness, and mercy that deals with a distinctive spirituality formation of Christian families which could give example in the Church. 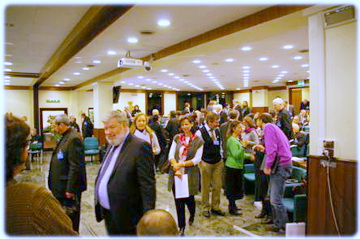 The reports were of wide variety and came from the most different fields of the Church’s Family Pastoral. Also, difficult cases were mentioned, for example, the question of remarried divorcees, marriages of different religions, as well as the forced marriages in Eastern countries.

Professor Albert Biesinger from Karls University in Tübingen encouraged the spiritual movements to participate in the method “catequesis familiar”, developed by him, to prepare for the First Communion. His concept is based on experiences in Latin America, which introduces parents in preparing their children and leads to a lingering of faith in the community. The spiritual movements, with their concrete faith, are an important pillar. The benefit of the movements is to meet families who are interested in deepening their faith.

The Conference began with a rigid time control, in which through the development of the Congress it became more Italian and humanly relaxed. A higher volume level showed the presence of animated conversations during mealtimes. The Exchange during the breaks was very lively and many contacts could be established. Bishop László Bíró from Hungary welcomed the Schoenstatt participants with great warmth and strong shoulder pats. He blessed the “Marriage Way” of the Schoenstatt Family Movement in Hungary.

There was also a happy reunion with Fr. Guillermo Gutiérrez, Secretary of the Pontifical Council for the Family, who had attended the European Family Congress in Schoenstatt in May of this year. 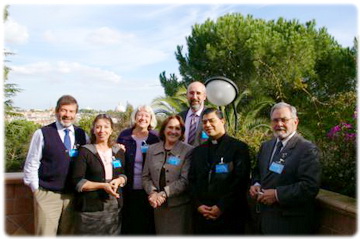 Four families of the Schoenstatt Movement could participate in the Congress: Marité & Ramón Marini from Paraguay, of International Council of the Federation of Families, Maria & Heizmann Klaus of the German Council of the Federation of Families, also, Pilar & Dr. Luis Jensen and Elisabeth & Bernhard Neiser of the General Council of the Institute of Families. Family Heizmann stated their experiences in the German Ecumenical Network of Marriage Initiatives in their report. Family Neiser reported on the experiences of the Schoenstatt Movement with the Home Shrine. It was interesting that Schoenstatt was mentioned in different reports every day. The Spanish initiative EIPAF reported of working with the Schoenstatt Movement at parish level. Also, the Argentine initiative, “Consultorios Familiares de Familias para las Familias” (Family Counseling of Families for Families) reported on the fruitful cooperation with Schoenstatt families from the Diocese of San Martín. Families Marini and Jensen brought up constructive contributions to the discussions. So, it became clear the Schoenstatt Family Movement plays an important and active role in the concert of the various initiatives and movements. 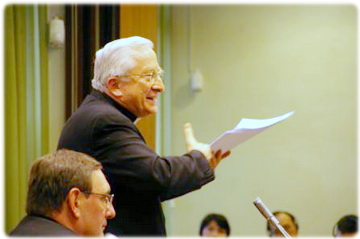 A happier Cardinal Antonelli tried to put together the wealth of experiences in his final presentation. With exhilarating joy and Italian temperament, he encouraged all participants to commit to form joyful, happy families.

The Congress ended with the vigil with the Holy Father in St. Peter’s Basilica. The participants of the Congress had a special place close to the main altar and could follow closer the festive ceremony.