Annual Mass of the Movements with Archbishop Wuerl 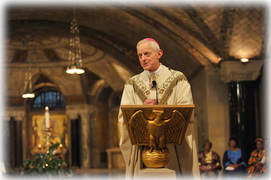 USA, Enrique Soros. “In addition to being faithful to their charisms, the primary role of the Movements is to spread the Gospel, transform the sparks into fire, sow the seeds of evangelization, and water them,” Cardinal-designate Wuerl enthusiastically affirmed at the homily of the annual Mass organized by the Association of Ecclesial Movements and New Communities in the Archdiocese of Washington, on October 31st, 2010, in the National Shrine of the Immaculate Conception crypt that was filled with members and friends of those communities.

The festive atmosphere was felt everywhere. Different musicians arrived with their varied string instruments, percussion, etc., while the members of the choir of the Saint Margaret of Scotland Parish, from Seat Pleasant, Maryland, wearing colorful choir robes, took their places at the front of the church and prepared to set a very joyful and profound tone to the celebration.

Sent by the Spirit to the Church and the world 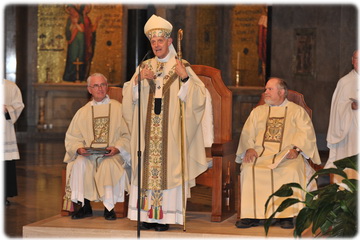 Manuel Aliaga, the liaison between the Archdiocese and the Movements, made the official presentation. The Mass continued with a spirit of profound brotherhood and joy. The songs expressed the Movements’ message for the Church and the world: the message of Jesus comes through Mary, his Mother, who asks for the Holy Spirit. In the first place, the Spirit revitalizes the soul, and sends one forth to live the Gospel in depth, touching every fiber of the soul. Secondly, it leads one to transmit it, to carry it, to sow it throughout the world, to the ends of the Earth.

Adolfo Paglinawan, a member of the Couples for Christ Movement and the current coordinator of the Association, addressed the participants at the end of the Mass; he expressed the mission of the movements. Maureen Ray of Madonna House, who is the new coordinator, received a special blessing from Archbishop (now Cardinal-designate) Wuerl, along with Jeff and Kathy Foley, representatives of Marriage Encounter.

It was a special experience to participate in a Mass with the Archbishop of Washington, who will be consecrated as a cardinal in Rome, by Pope Benedict XVI on 20 November.

Active members of the Association 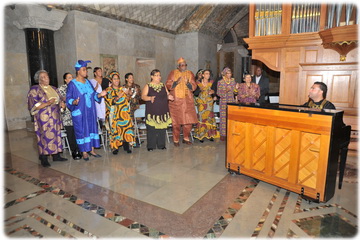 March for life: January 24th at St. Matthew’s Cathedral and the National Mall 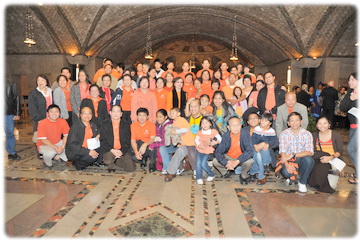 Representatives of the Movements mentioned above meet bi-monthly to unite in the same spirit and to plan activities in which they forge their charisms and they project them to the Church and to the world. The next event will take place on January 24th, 2011 at Saint Matthew’s Cathedral, 1725 Rhode Island, Washington, DC, two blocks from the Dupont Circle Metro station. This date is key for the Church in the United States, since thousands of people from all of the states will congregate at the National Mall for a pro-life march against abortion. Before this event, the participants will attend different, large Masses, including one at the Verizon Center. The Mass that the Movements are organizing will take place within the framework of the celebration that will begin at 8:30 a.m. at the church mentioned above. Everyone is invited to participate.

For inquiries about any of these Movements, please contact Maureen Ray, the Association’s new coordinator at: 202-547-0177 or [email protected].

In the near future, the website for the group will be re-activated: www.catholicmovementsdc.org.