The First Group of Students with a Master’s Degree in Church Social Doctrine, Graduated

ARGENTINA, Carlos Ferré. It was an historic moment for the “John Paul II” Center for Studies of Church Social Doctrine. This program emerged as a common experience of members from different movements and institutions of the Catholic Church in Argentina. The first group of students graduated with a Master’s Degree in Church Social Doctrine in South America. The conferring of degrees and the granting of diplomas to the first fifteen students took place in the “Manuel Belgrano” auditorium of the Argentine chancery. 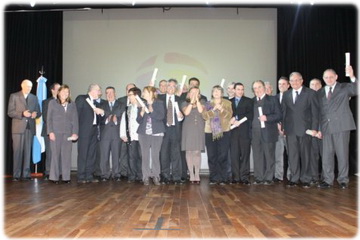 Also attending the ceremony were civil and ecclesiastical authorities and personalities from the academic and world cultures, among them the Director of National Worship represented by the Secretary of Worship, one of the auxiliary bishops from Buenos Aires, the Most Rev. Luis Fernández, Fr. Ricardo Martensen, founder of the Word of God Movement, Fr. Javier Arteaga, national director of the Schoenstatt Movement, Fr. Juan Pablo Cattogio, superior of the Schoenstatt Fathers, Dr. Leonor Salierno, leader of the Focolare Movement, Dr. Fernando Flores Maio, president of the Ecumenical Forum, Dr. Daniel Martino, president of the Estrada Foundation, the ambassadors Miguel Angel Espeche Gil and Carlos Custer, Dr. Angel Monti from the National Technological University, and Mr. Miguel Del Cerro from the Federation of Circles of Catholic Workers, among others. 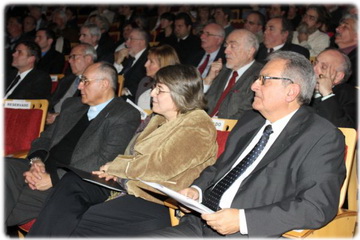 Among the numerous agreements received, outstanding was the one sent by the Pontifical Council on Peace and Justice. The Most Rev. Mario Toso, secretary, expresses: “The Master’s Degree and Diploma in Church Social Doctrine certifies your competence in the area of the social dimension of evangelization. You are called to not only proclaim the Social Doctrine of the Church but to especially be witnesses of it…..”

“…..to find the answers needed by the persons of today – concerned about the future of humanity and for the commitment to develop a transforming activity of the present, promoting dialog among the men of good will who seek the truth.” With these words, the director of CEDSI (Center for Social Doctrine Studies of the Church “John Paul II”) Dr. Carlos Ferré began the ceremony. “We,” affirmed Ferré, referring to that zealously sought for truth, have found in the Social Doctrine of the Church “keys which allow us to begin to solve the new social questions and to face the problems not resolved by the former social questions and we want to offer them to everyone.” He also highlighted the extraordinary response which the CEDSI proposal has had since there are almost 100 students seeking a Master’s Degree in this program – among which are students from seven Latin American countries – and more than 250 students seeking the diploma.

Social, cultural and political conversion in the broadest sense of the word

Dr. Susana Nuin then summarized the CEDSI “John Paul II” objectives explaining that this project is the dream of persons of good will who seek to help and help themselves to promote “social, cultural and political conversion in the broadest sense of the word” based on the teachings of the Master of humanity founded on love. “Everything which motivates love for others is difficult to stop,” concluded Dr. Nuin. Dr. María Teresa Compte Grau affirmed that “there is no contradiction between love and academic excellence…..between action and contemplation.” On that premise, Fr. Angel Galindo explained that as a proposal which occupies us “it intends that reflection be at the service of action,” it is then about “helping those who act to reflect, and helping those who reflect to act.”

In action and for action

During the ceremony, the message sent by the archbishop of Mercedes-Lujan, the Most Reverend Agustin Radrizzani, was read. Archbishop Radrizzani is the general adviser to the convoking institution. He emphasized the concept of unity from where the DSI proposal emerged because “the seeds of the Word live in innumerable expressions of social duties.” Here he recalled the words of Bishop Angelelli: “with one ear on the Gospel and one ear on the people,” “with whom to do it?” Archbishop Radrizzani asks himself, and he answers himself, ” with everyone…..in an inclusive dynamism,” focused on “common good” and thus “conceiving for ourselves a nation of brothers and sisters” acting “not for others but with others…..in a close connection with the speaker where the answers are not suppositions but necessities,” with a method of formation based “on action and for action” and a way actualized according to the needs and resources of humanity which these times imply “to build with all real and virtual webs” which should be “founded on attachments of living relationships, active and working.”

Bishop Fernández, auxiliary bishop of Buenos Aires, blessed the diplomas and prayed to God that the new graduates would make a contribution to society, that they would find the means for stopping social exclusion.

In the same ceremony, 40 students who have fulfilled the requirements for a diploma in DSI with an emphasis on public and social leadership received their certificates. These students completed their studies in the dioceses of Buenos Aires, San Fernando, Lomas de Zamora and La Plata.

A bit of history

The Center for Church Social Doctrine Studies “John Paul II” came forth as an initiative of the Apostolic Schoenstatt Movement in Argentina which convoked other movements of the Church to think along together and then execute a program which would collaborate to solve a grave problem regarding a leadership crisis which took place in the nation in the 2001-2002 year.

Members from the Focolare Movement, the Movement of the Word of God and the St. Thomas More Group accepted the challenge. After a period of communitarian discernment, they concluded that it was necessary to accompany the formation of new leaders for society with the strong ethical anchor which is found in the social doctrine of the Church. Simultaneously they agreed on the need for finalizing a center of excellence which would be dedicated to the formation, diffusion and investigation of the cause and placing the accent on the objective for which DSI goes into action.

In 2005, CEDSI began its public activities offering first a formative program of two years in duration: the diplomas in DSI oriented on public and social leadership under the academic auspices of The People’s Autonomous University of Puebla, México. The course of study began to take place in different cities of Argentina with more than 250 students enrolling. In 2007, an agreement was signed with the Pontifical University of Salamanca – Madrid campus and the first studies for a Master’s Degree in Church Social Doctrine began in Argentina. It was the first in South America, and for this reason students from the different countries from the continent attended. The first group began in 2008. Some of the students have had their theses approved and have been certified. The second group began in 2008 and graduated this year. The third group began with 32 students and will reach a total of 100 enrolees.

Schoenstatt members who have begun the Master’s program consists of two (Marcelo Bulfón and Carlos Ferré) who have received diplomas. An additional two have completed their studies and three more have enrolled in the third group.