Igino Giordani: a new stage in his beatification process

Focolare Movement. “A milestone for the Church, for the Focolare Movement and for the Diocese” said Bishop Martinelli of Frascati, speaking about the beatification process of Igino Giordani, which will now be progressed by the Vatican. In his address as president of the concluding ceremony of the diocesan phase on 27 September, the newly-appointed Bishop recalled the nickname given to Giordani by Chiara Lubich, the founder of the Focolare Movement. “He was called, “Foco”(Fire) because he was full of God’s Spirit, which led him to be a witness wherever he was.” 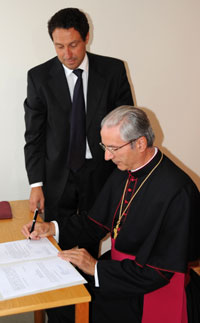 The ceremony was held at the international Centre of the Focolare Movement at Rocca di Papa, where, like Chiara Lubich, his remains are buried. After the death of his beloved wife, Mya, Giordani lived at the centre for the final six years of his life.

The enquiry lasted for four years

The scrutiny by historians and theologians of 100 books, 4000 articles and 16000 pages of unpublished work produced 2500 pages of documentation. The judge of the Diocesan Ecclesiatical Tribunal, Bishop Francesco Tasciotti, said that this was more a spiritual than a juridical task. “We discovered someone who was extremely gifted and multifaceted, catholic and universal in outlook, and who was able to understand and to live the whole of the Christian vocation in all its expressions in an outstanding way.”

Giordani was described by Focolare President, Maria Voce. She spoke of his role in the Church, and his view of the laity and of ecumenism many years before the Second Vatican Council, which gave the impression that he was a priest, and “at least a Jesuit” according to one source. Giordani was “indeed called Father, but only by his four children”. His spiritual formation came “directly from the Fathers of the Church and the lives of the saints.” Of no less importance was his political career, “which began alongside Don Sturzo in the early days of the Partito Populare”, and “continued through the years of Fascism as he fought for freedom and democracy.”

The seed of all the lay vocations 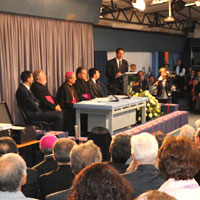 His life experience was extremely broad and later took a new, less well known, turn. Maria Voce recalled “his very special meeting with Chiara Lubich, in 1948, five years after the birth of the Focolare Movement. Giordani represented for the Focolare founder, a “humanity” scarred by war, torn apart by a divided world, racked with materialism, while at the same time thirsting for communion and fraternity, and crying out for unity. Chiara herself said of him, that “he more than anyone else had a special grace” for understanding the newness and breadth of the charism of unity she had received from God, and of its relevance in human history. The Focolare founder saw him as “the seed of all the lay vocations” that slowly emerged in the Movement. She saw him as a “cofounder”.”

These fruits could only be generated as the result of heroic virtue, now recognised by the Diocesan Ecclesiastical Tribunal, and which will now be verified by the Vatican.