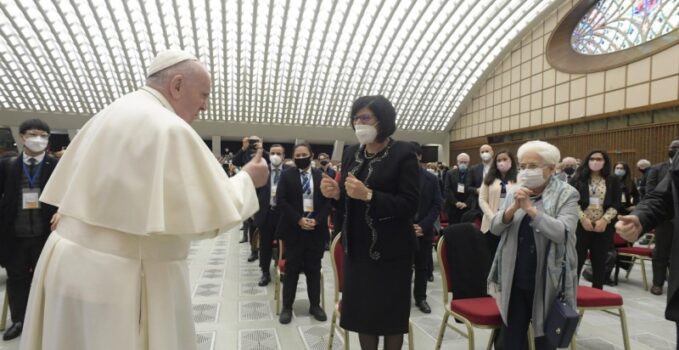 POPE FRANCIS TO THE FOCOLARE MOVEMENT •

This morning Pope Francis received in private audience the 362 participants of the General Assembly of the Focolare Movement, a representation of whom were present in the Paul VI Hall in the Vatican and with the majority connected via internet. Welcoming them, he extended his greetings to all members of the Focolare Movement. He encouraged them to remain faithful to the original source of their charism while remaining in dialogue with new social and cultural situations. He invited them to beware of any self-absorption, to see every crisis as an opportunity to grow, to be witnesses of fraternal love that overcomes all barriers and to increasingly promote synodality. He concluded with an invitation to remain, in imitation of the foundress Chiara Lubich, attentive to the cry of abandonment of Christ on the cross, the heart of Christianity and of the charism of Focolare. —

A deep, impactful speech ans applicable to any movement ans “totally applicable to us”, as a young Schoenstatt Father said when we shared it with the schoenstatt.org team.

As a “starting point” to encourage a deeper reading and debate in our groups or here, in this organic, free and independent platform that seeks to open a free space for free exchange, which is the purpose of free or unofficial or officialist platforms.

In order to continue to be a living expression of the founding charism.

As we know, this requires a dynamic fidelity, capable of interpreting the signs and needs of the times and responding to the new demands of humanity. Every charism is creative, it is not a statue in a museum, no, it is creative. It is a question of remaining faithful to the original source, striving to rethink it and express it in dialogue with the new social and cultural situations. It is firmly rooted, but the tree grows in dialogue with reality.

This avoidance of all self-absorption, which never comes from the good spirit, is our hope for the whole Church: to beware of self-centredness, which always leads to defending the institution to the detriment of individuals, and which can also lead to justifying or covering up forms of abuse.

Self-absorption prevents us from seeing mistakes and shortcomings, it hampers progress, and it prevents an open review of institutional procedures and styles of governance.

Self-celebration does no good service to the charism. No. Rather, it is a matter of welcoming each day with wonder – don’t forget wonder always indicates the presence of God – the freely-given gift you have received by meeting your ideal of life and, with God’s help, trying to correspond to it with faith, humility and courage, like the Virgin Mary after the Annunciation.

2 The importance of crises

3 Living spirituality with consistency and realism

With regard to acting outside the Movement, I encourage you to be . And in this, the Servant of God Chiara Lubich gave many examples! – witnesses of closeness with fraternal love that overcomes every barrier and reaches every human condition. Overcome barriers, do not be afraid! It is the path of fraternal closeness, that transmits the presence of the Risen Christ to man and women of our time, starting from the poor, the last, the rejected: working together with people of good will for the promotion of justice and peace. Do not forget that closeness, nearness, was God’s most authentic language. Think of that passage of Deuteronomy, when the Lord says: “What other great nation has a god so near to it as the Lord our God is whenever we call to Him?” That style of God, of closeness, went farther and farther until it reached that great, essential closeness: the Word incarnate, God who made Himself one with us. Do not forget: closeness is God’s style, it is the most authentic language, in my opinion.

With regard to your effort within the Movement, I urge you increasingly to promote synodality, so that all members, as depositaries of the same charism, may be co-responsible for and participate in the life of the Work of Mary and its specific goals. Those who are responsible for governance are called to foster and implement transparent consultation not only within the governing bodies, but at all levels, by virtue of that logic of communion according to which all can place their gifts and opinions at the service of others, in truth and with freedom.

Pope Francis, to the participants in the General Assambly of the Focolare Movement