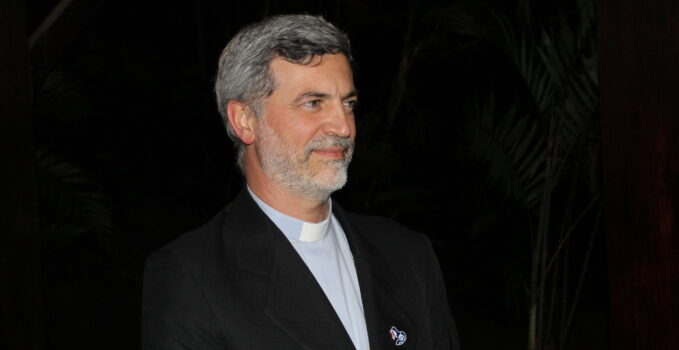 The Holy Father has appointed as advisor to the Pontifical Commission for Latin America the Reverend Fr. Alexandre Awi Mello, of the Schönstatt Fathers, secretary of the Dicastery for the Laity, Family and Life. —

He was ordained a priest on 7 July 2001, as a member of the Secular Institute of Schönstatt Fathers, and he has occupied the following positions: Parish Vicar of Nossa Senhora das Dores in Santa Maria in the State of Rio Grande do Sul; Councilor of Apostolic Youth of Schönstatt for the Southeast and the South of Brazil; National Director of the Schönstatt Movement in Brazil.

He completed studies in philosophy and theology at the Pontifical Catholic University of Santiago de Chile; he earned a license in Theology at the Philosophisch-Theologische Hochschule Vallendar (Federal Republic of Germany, 2000), and a Ph.D. in Theology (Mariology) at the University of Dayton International Marian Research Institute, in Ohio (United States of America).

He served as Professor of Pastoral and Systematic Theology in Londrina, at the Paolo VI Institute (2002 2004) and at the Pontifical Catholic University of Parana (2005-2009). Since 2012, he has been teaching in São Paulo, at the Salesian University Center and the São Bento Faculty.

In 2007, he worked in the secretariat of the drafting commission for the Latin American bishops’ council meeting in Aparecida, Brazil.

Fr. Alexandre is the author of the book “She is my mother”, original in Portuguese and translated into Spanish, Italian, English, German, as a result of a long interview with Pope Francis about his image of Mary and the roots of his spirituality and theology in the “Theology of the People”.

“I accepted this task because of Father’s Dilexit Ecclesiam” – Interview with Fr. Alexandre Awi