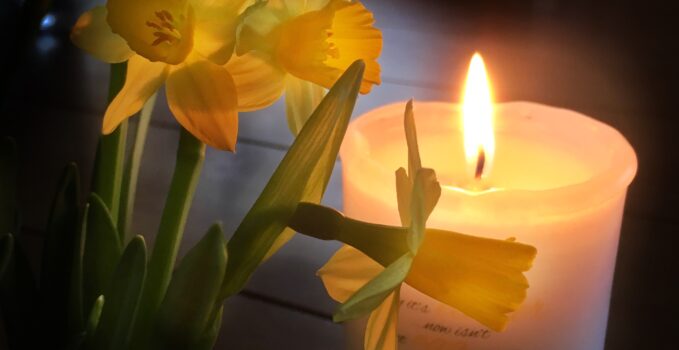 Posted On 2020-04-18 In Church - Francis - Movements, Covenant Solidarity in Times of Coronavirus

Candles in the windows, bells, and a silent Easter flashmob

EASTER 2020 in the time of the coronavirus, Maria Fischer •

A recycled Easter candle from last year, in my home shrine; an LED flame candle with an Easter cross attached (for the first time in my long life, it’s acceptable) for a relative in a nursing home that I haven’t been able to visit for weeks. A bottle of holy water found in some corner of the house. And the most important thing on this Easter night of 2020: a candle in the window of my apartment, to be lit simultaneously with the Easter candle in St. Peter’s Basilica. Everything was ready for the rarest Easter vigil of my life. The moment arrived, this moment that I thought I would miss the most, when the Easter light is shared from candle to candle, from faithful to faithful. I light one candle after another in my home, my home shrine, this place of my remote work, of my telephone calls, of my virtual Masses, of my WhatsApp messages, of my apostolate as a Schoenstatt.org journalist, is illuminated, candle by candle, with the Easter light, at this very moment of celebrating the new light with the Holy Father and with hundreds of friends throughout the world. The Lord has truly risen, here.— 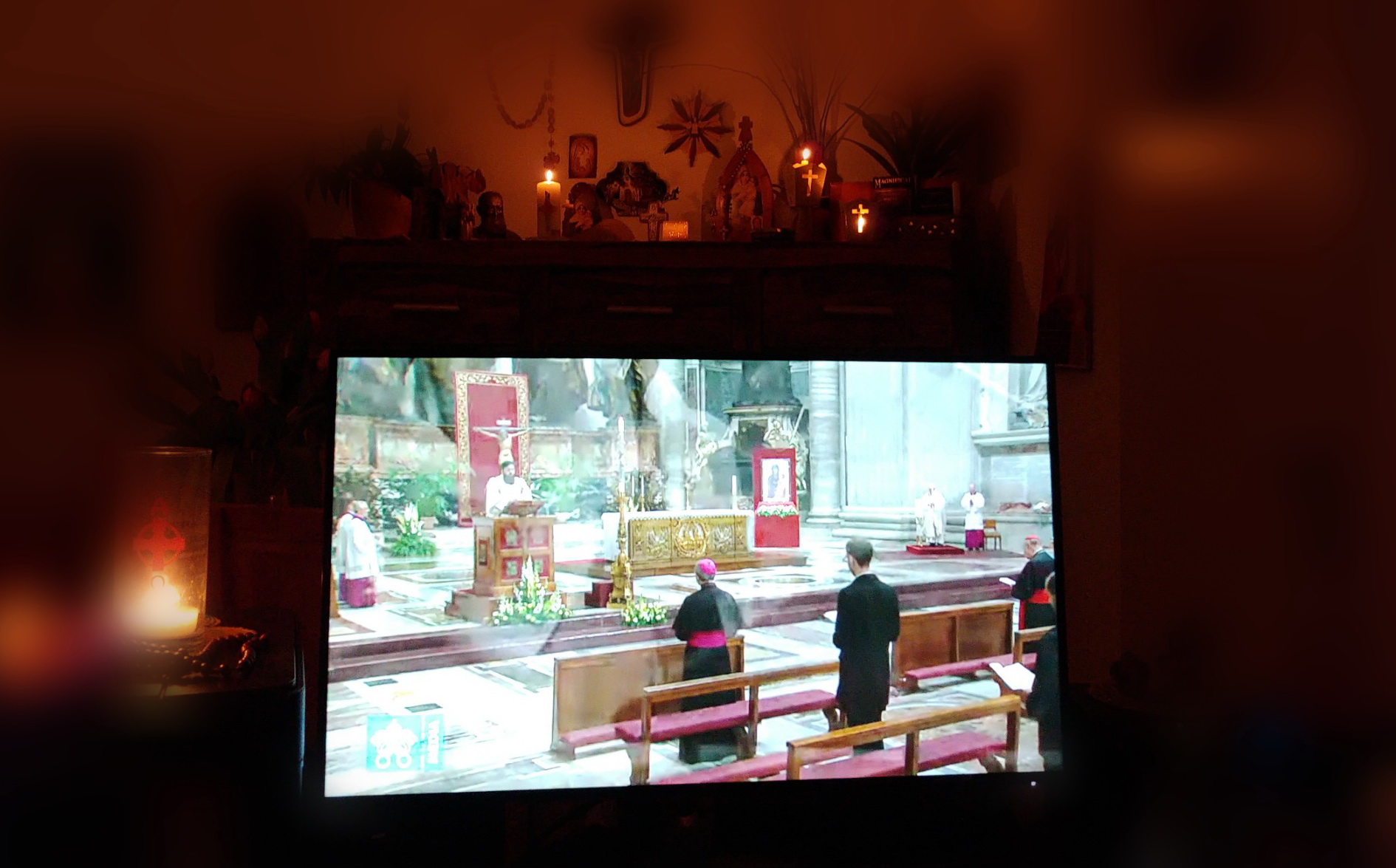 We have returned to the celebrations in the homes, as the first communities. And at the same time we are intertwined with many countries, languages, generations… perhaps more than ever.

“Light a candle at the Easter Vigil.” This was the proposal of the Commission of the Bishops’ Conferences of the European Community, and of the Council of European Bishops’ Conferences for this Easter 2020.  The proposal was made to all Catholics “to spread a message of hope by lighting a candle in their windows at the Easter Vigil. This gesture is -small but significant- to give hope” at this historic and dramatic moment, when millions of people in Europe and the rest of the world are affected by suffering and uncertainty caused by the COVID-19 pandemic”, the two presidents, Hollerich and Bagnasco, said. “More than ever, we need to cultivate furrows of brotherhood. Together and united is how we will overcome this blow,” they say. Friends in Madrid lit the candles, as did families in Bavaria and Switzerland or young people in Italy.

“At the Easter Vigil from the Sion Chapel in Florencio Varela the priests blessed the water and I placed those two bottles of water in front of the screen to be blessed,” Claudia Echenique said.

A family builds an Easter fire in their garden. The light from this fire joins the rays of light from the full moon.

The church bells are ringing in my town, and from the balcony, in house two or three blocks away, I see the light of a candle. 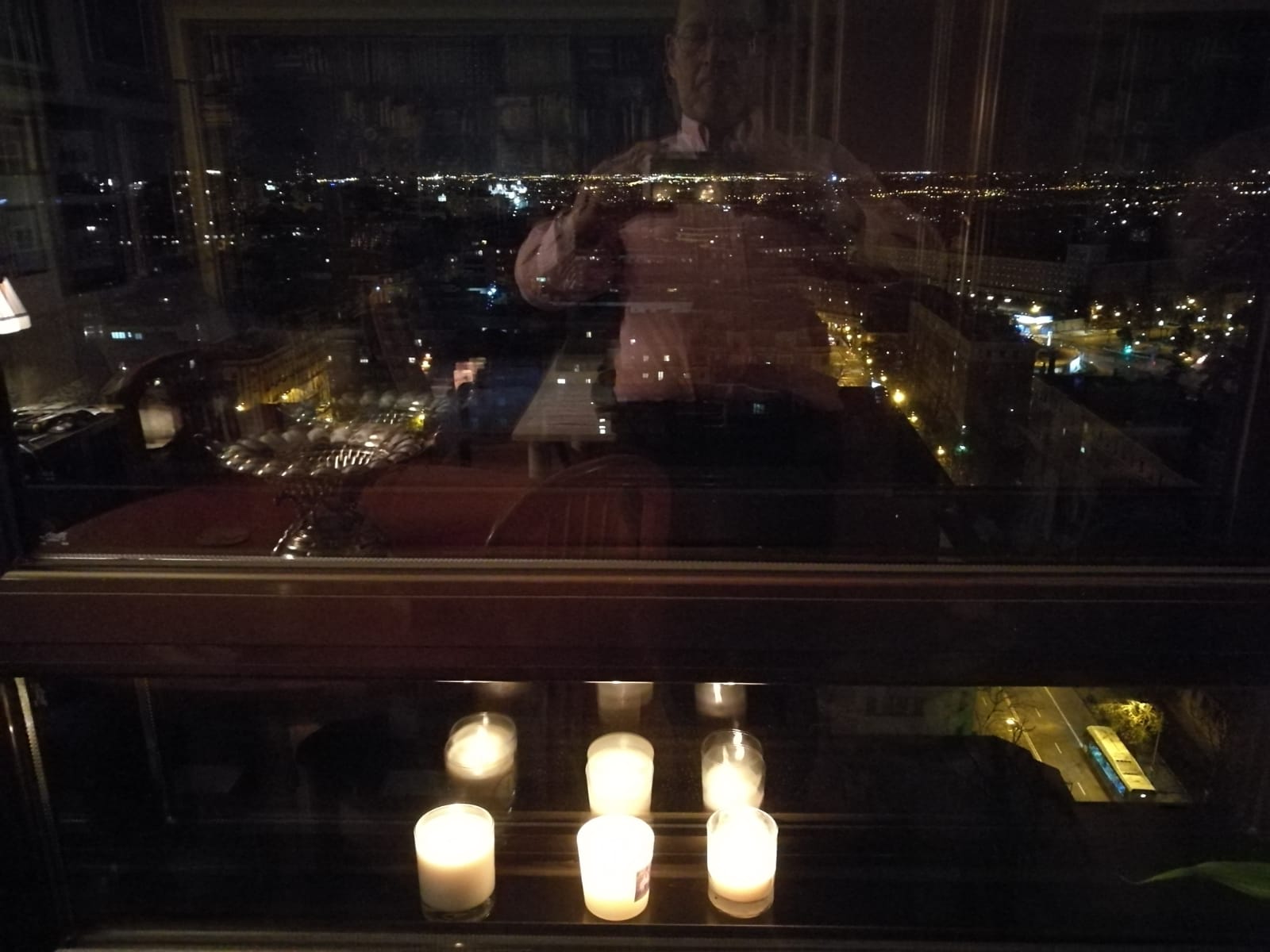 Christ the Redeemer of Rio de Janeiro illuminated as a doctor.

On Easter Sunday, April 12, the uniform of the country’s doctors, as a tribute to the health personnel who are fighting to stop the Covid-19, illuminated the image of Christ the Redeemer in Brazil.

Likewise, the flags of several countries, especially those most affected by the pandemic, such as Spain, Italy, China, the United States and Brazil, illuminated the image along with the word “Hope” in different languages, to encourage the nations that are fighting against this new disease. 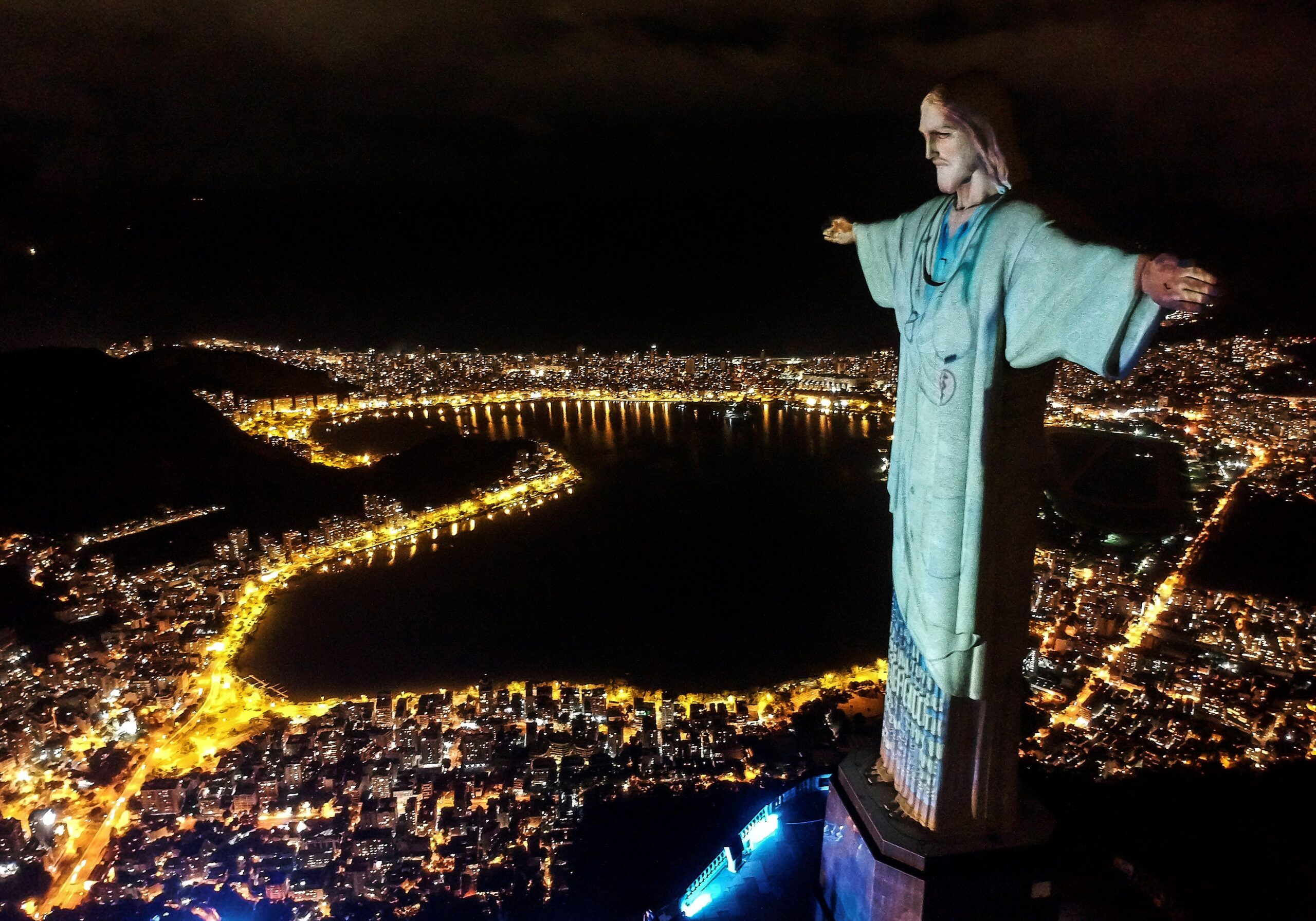 Blessings from the air, from cars and… with a water gun.

The images of the American priest who blessed his parishioners’ Easter baskets with holy water from a water gun went viral. Creativity of love and faith.

Father Darío Bragado Rodríguez, a 90-year-old priest and Canon of the Metropolitan Cathedral of Mexico, gave the blessing to the capital of the country from an helicopter on this Holy Saturday.

Some priests from the Archdiocese of Santa Cruz (Bolivia) and also from Sucre, went out into the streets with Jesus in the Blessed Sacrament to bless the faithful people who remain in their homes to prevent the spread of Covid-19. The same thing happened in Switzerland and in other countries.

On Easter Sunday, at 8:30 a.m., from the Venezuelan Caribbean coast, Bishop Raúl Biord of La Guaira, blessed with the Blessed Sacrament the Caribbean Sea, all the peoples in it and the whole world.

In Ciudad Bolivar, Venezuela, Fr. Antonio Valladares blessed the town with the Blessed Sacrament from the top of the tower of the Metropolitan Cathedral.

Monsignor Ulloa traveled through San Miguelito and Panama in the pope-mobile to give the blessing on this Easter Sunday.

In Spain, as in many other countries, the bells of all the churches rang at noon on April 12, Easter Sunday, to express the hope that is born from Christ’s victory over death.  “The Church is the depository of the hope that springs from faith in Christ who died and rose again and is shared in charity. We ring the bells to offer this hope to those who need it most today”, concluded the bishops of the country. 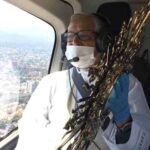 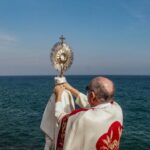 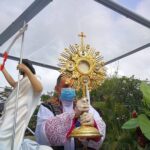 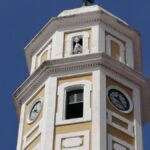 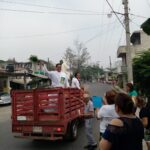 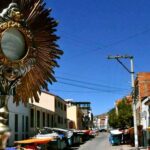 Latin America consecrated to the Virgin of Guadalupe

During a ceremony presided over by the Archbishop Primate of Mexico, Cardinal Carlos Aguiar Retes, Latin America and the Caribbean were consecrated this Easter Sunday to Our Lady of Guadalupe, asking for her intercession for the end of the Covid-19 pandemic.

After the bells of many cathedrals in Latin America resounded at noon, celebrating the consecration, Cardinal Aguiar Retes, accompanied by the Apostolic Nuncio in Mexico, Bishop Franco Coppola, and various bishops and priests, began the celebration of the Mass in the Basilica of Guadalupe, a temple that preserves the mantle where the image of the Virgin Mary was miraculously imprinted in 1531.

The celebration was held behind closed doors and broadcast by social networks and the media.

For now, this act of hope already has concrete actions. The alliance of the Mexican Episcopate and the businessmen to make a “Solidarity Chain of Food and Medicine” in view of the effects of the pandemic: unemployment, shortage of food and medicine. The consecration to the Virgin of Guadalupe “will trigger in Mexico a national campaign for “donation of food and medicine” in order to achieve “families without hunger”, an alliance that wants to reach the poorest and “accompany each person, to incarnate the experience of mercy, communion and solidarity” (Cfr. PGP 24). This is the first miracle.

We will soon publish more examples of this type of covenant.

The silent Easter flashmob in Germany

Looking out of the windows on sunny Easter Sunday, many Germans could not believe their eyes. There were Easter messages written in the streets: The Lord has risen! Jesus lives! Hallelujah!

It was an idea of Lutheran Christians in Potsdam, a city near Berlin, in Germany, who just a few days before Easter launched the idea of a “‘silent Easter flashmob:

Take a piece of chalk and paint on the sidewalk near your apartment:

Hundreds of photos filled the social networks under the hash tag #osterflashmob.

Hundreds of parents who walked with their children (in Germany it is still possible to go out as a family or alone) had to explain to their children what it meant and sometimes it was the children who explained it to their parents.

Easter in the streets, Easter outside the churches, Easter reaching out, in our Galilee, as Pope Francis said. 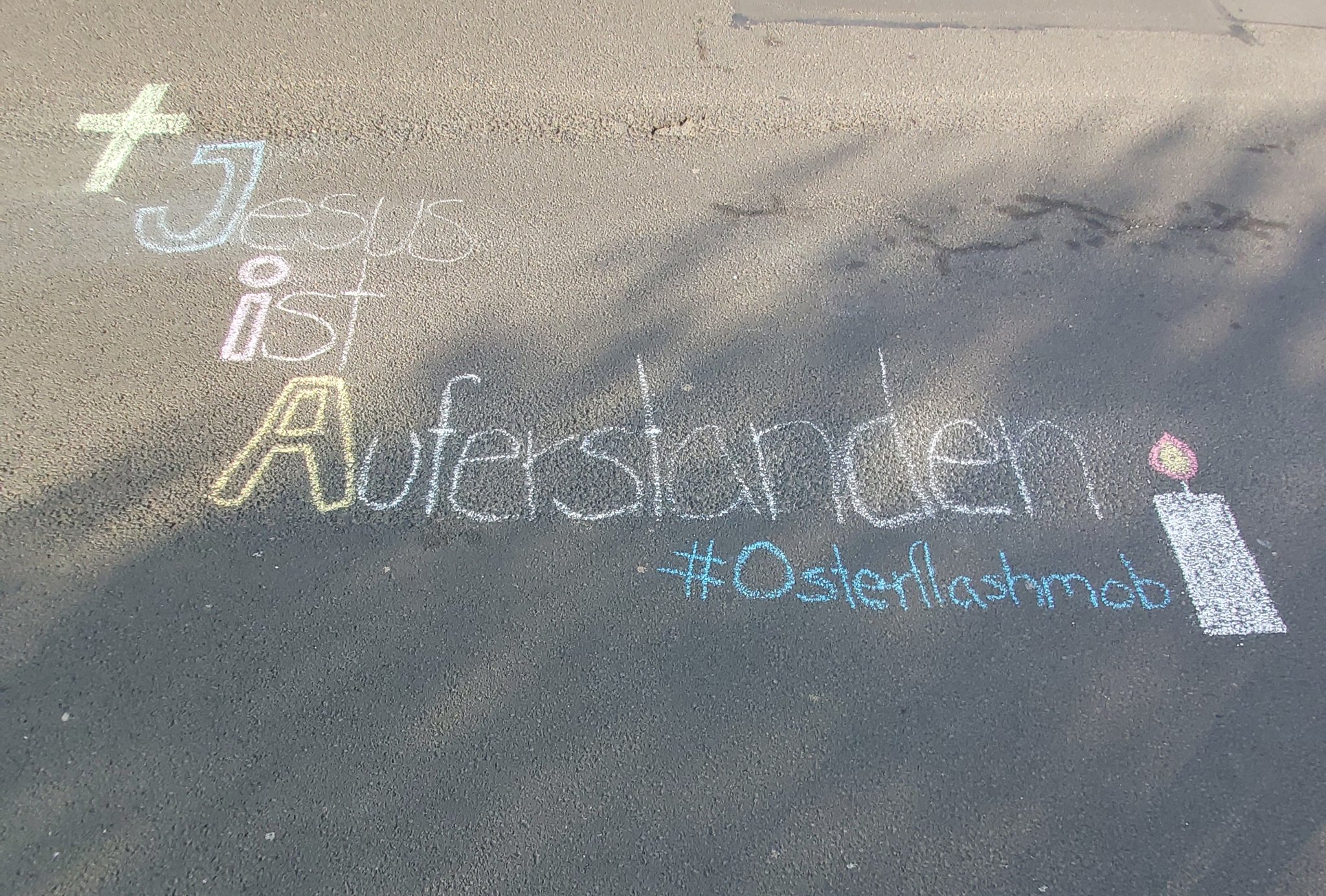 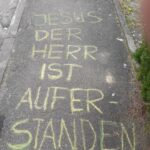 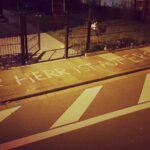 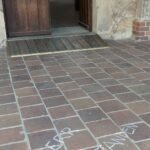 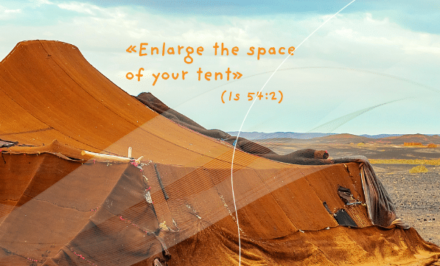