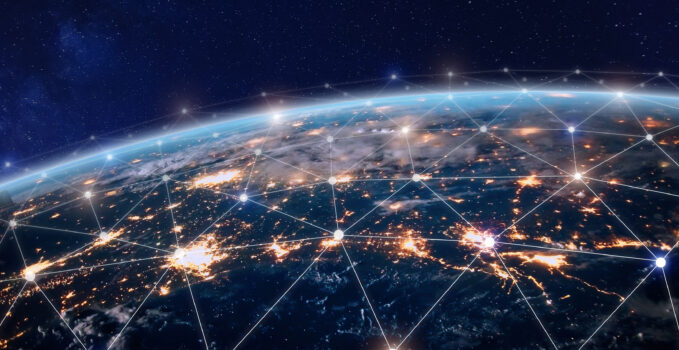 In more and more dioceses and countries, Masses are suspended until Easter, as a painful but necessary means to stop the spread of the coronavirus and thus to care for the most vulnerable and the health system. In the middle of Lent we are challenged to live in spiritual communion and to live as a domestic Church. But in the midst of this panorama creativity and hope arise, taking advantage of the connecting and evangelizing potential of the Internet. From the Vatican, from the Original Shrine, from various shrines, from many cathedrals and churches of the world, Masses celebrated behind closed doors are transmitted. —

“I will be in Cologne cathedral today at 10:00,” said Bettina Betzner of the Women’s Federation – who lives in southern Germany – as she received the message that masses can be seen from the cathedrals of Germany. “Good, my cathedral,” I reply. “But I will be at the shrine in Madrid at noon.” One minute between joy and amazement. “A worldwide intertwining of people and churches in front of the screens,” says Bettina. “An immense opportunity for our Church in these times.”

From Venezuela, Xiomara M. will go on pilgrimage to the Original Shrine for the Mass of Father Pablo Pol at 5:00 p.m. German time, noon in Venezuela. Before that, we can still meet at the Angelus of Pope Francis.

In view of the situation that has been created by the coronavirus, (Covid-19) the Holy Father has decided that the Holy Mass that he celebrates in Santa Marta at 7:00 a.m. every morning, will continue to be transmitted live, today, Sunday, March 15th, and throughout next week. The Holy See’s press office reports this, explaining that in order “to comply with the norms that impose a ban on meetings in order to avoid the spread of the COVID-19 virus, the prayer of the Holy Father’s Angelus on Sunday 15 March and the general audience on Wednesday 18 March will be broadcast live on television, also on the Vatican News website.

“However, taking advantage of the possibilities of technology and seeing the need to maintain the attachment to the Shrine, we have decided the following: to celebrate Holy Mass in the Shrine behind closed doors and with only the presence of the priest and an assistant,” this is what Father Pablo Pol, Rector of the Original Shrine, communicated on Saturday. These Masses will be transmitted via webcam on the page www.urheiligtum.de (there is no way to see them on another site or to share them).

From the Daughter Shrines

On their Facebook pages, there is a transmission of Masses from the Shrines of Lisbon, Asunción,  and Tuparenda. 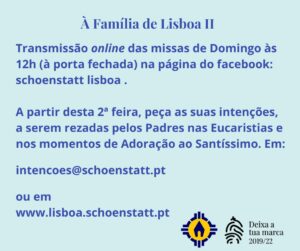 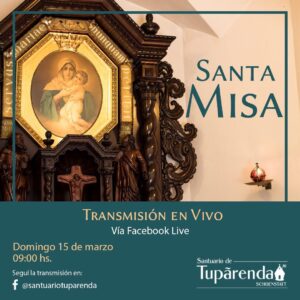 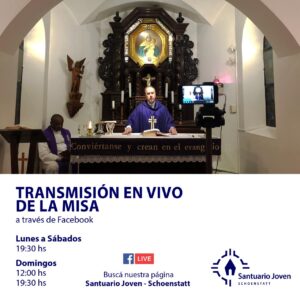 It’s time for the house church. It’s time for networked Christians. It is the hour of spiritual pilgrimage to shrines and cathedrals.

It is, more than anything else, a time for prayer and solidarity, for Easter trust.