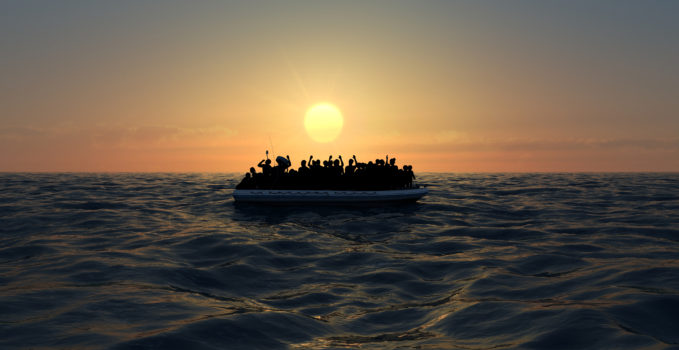 In a St. Peter’s basilica filled with a spirit of solidarity for the 250 immigrants, rescuers and survivors of the Mediterranean cemetery, Pope Francis on 8 July – the anniversary of his historic visit to Lampedusa in 2013, the first planned trip of his pontificate – launched a renewed and powerful appeal to help those “symbols of all those rejected” people who migrate. “They are first of all human persons”, he said, in midst of the tension in Italy over confrontations between the government and the NGOs who rescue people on the high seas. —

There have always been people who risked their lives by crossing the ocean, swimming, in lifeboats, on ships. The “Boat People” of Vietnam, young Germans who threw themselves into the Baltic Sea during the communist era, the more than 900 Jews who left Germany in 1939 aboard a luxury liner, the SS St Louis, hoping to reach Cuba and travelling on from there to the United States. In Havana, they were sent back to Europe, where more than 250 of them would be killed by the Nazis. The Cubans decided to reject most of the visas, probably for fear of being inundated by immigrants fleeing Europe. The captain then directed the ship to Florida, but the US authorities also did not allow him to dock, despite personal requests to President Franklin Roosevelt. It seems he was also worried about the mass arrival of immigrants…

“On this sixth anniversary of the visit to Lampedusa, my thoughts go out to those “least ones” who daily cry out to the Lord, asking to be freed from the evils that afflict them. These least ones are abandoned and cheated into dying in the desert; these least ones are tortured, abused and violated in detention camps; these least ones face the waves of an unforgiving sea; these least ones are left in reception camps too long for them to be called temporary. These are only some of the least ones who Jesus asks us to love and raise up. Unfortunately the existential peripheries of our cities are densely populated with persons who have been thrown away, marginalized, oppressed, discriminated against, abused, exploited, abandoned, poor and suffering. In the spirit of the Beatitudes we are called to comfort them in their affliction and offer them mercy; to sate their hunger and thirst for justice; to let them experience God’s caring fatherliness; to show them the way to the Kingdom of Heaven. They are persons; these are not mere social or migrant issues! “This is not just about migrants”, in the twofold sense that migrants are first of all human persons, and that they are the symbol of all those rejected by today’s globalized society”, said Pope Francis, whose words seem to be falling on deaf ears in a Europe that is in a state of panic over the massive arrival of immigrants.

But the issue of migrants who leave to seek a life away from extreme poverty, persecution, war and hunger, is not just a European issue. The majority of the refugees live in countries like Uganda, Jordan, Rwanda … Some people go to the United States, leaving poor and politically unstable countries in Central America, there are those who flee Venezuela and are stranded on the borders of South American countries. “They are persons; these are not mere social or migrant issues! “This is not just about migrants”… It’s not just about migrants

It is not just about migrants. In the largest refugee camp in Uganda, a Burundian refugee has founded Schoenstatt. More than one hundred people have already sealed their covenant of love with the MTA.

It’s not just about migrants. To date the Sant’Egidio Community has managed to save 2.800 refugees and helped them to find ways to integrate into Europe. These 2.800 refugees have found a legal alternative with the Sant’Egidio Community, stepping off airplanes directly from the refugee camps into Italy; they have visas and avoid the journey of death: crossing the Mediterranean in rafts, and avoiding having to pay human traffickers who “help them cross the Sea”. Since 2015, more than 1.650 refugees, most of them Syrians who lost everything in Damascus and Jons, have arrived thanks to the action of the humanitarian corridors of the Sant’Egidio Community. They are Muslims and Christians. To choose these families, the Community selected people who were socially vulnerable, regardless of their religion. There were 498 refugees from Ethiopia, most of them Eritreans who fled the country and sought political asylum in the neighboring country. Following Italy, other European countries such as France, Belgium and Andorra, joined these humanitarian corridors in collaboration with the Sant’Egidio Community. “We spontaneously return to the image of Jacob’s ladder. In Christ Jesus, the connection between earth and heaven is guaranteed and is accessible to all. Yet climbing the steps of this ladder requires commitment, effort and grace. The weakest and most vulnerable must to be helped. I like to think that we could be those angels ascending and descending, taking under our wings the little ones, the lame, the sick, those excluded: the least ones, who would otherwise stay behind and would experience only grinding poverty on earth, without glimpsing in this life anything of heaven’s brightness,” said Pope Francis.

“This is, brothers and sisters, a tremendous responsibility, from which no one is exempt if we wish to fulfil the mission of salvation and liberation in which the Lord himself has called us to cooperate. I know that many of you, who arrived just a few months ago, are already assisting brothers and sisters who have come even more recently. I want to thank you for this most beautiful example of humanity, gratitude and solidarity.”