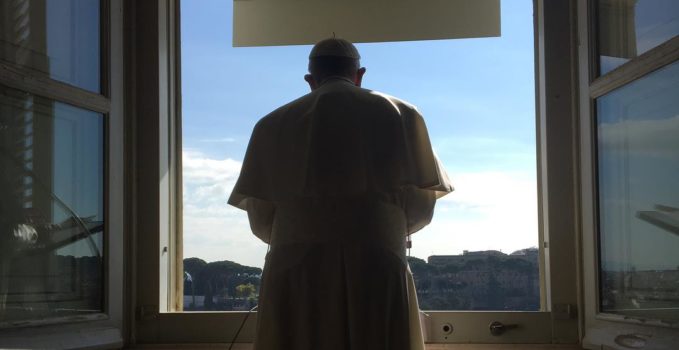 TOWARDS THE YOUTH SYNOD, editorial team •

One week after signing up as the first pilgrim for the World Youth Day, in the presence of two young people, Pope Francis once again used the moment after the Angelus to turn the whole Church’s attention to the youth.— 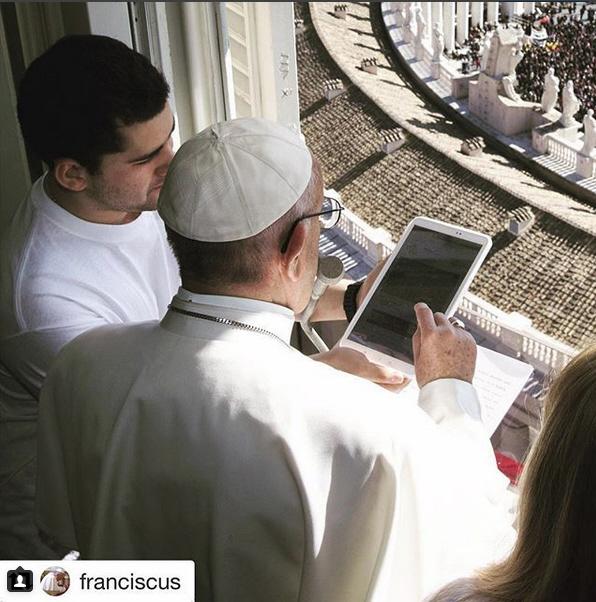 Francis reminded everyone that in a month, from 19 to 24 March, 300 young people from all over the world will arrive in Rome for a preparatory meeting for the Synod in October. Two youth from the Schoenstatt Movement will participate in this “Pre-Synod”: Lucas (Brazil) as the Movement’s representative and Magdalena (Germany) as part of the German Bishops’ Conference. But it doesn’t end there.

“I firmly wish that all young people can be protagonists in this preparation,” Francis announced and explained that they can “participate online, through language groups moderated by other young people. The contributions of the “Internet groups” will combine with those of the Rome meeting. Dear young people, you can find the information on the website of the Secretariat of the Synod of Bishops. I thank you for contributing to our journey together!” This is how the Holy Father will celebrate the fifth anniversary of his pontificate on 19 March, listening to the young people of the world.

The morning of Friday 16 February saw the presentation of the pre-synod meeting, which will take place in Rome from 19 to 24 March, in preparation for the Synod of Bishops on young people, the faith and vocational discernment in Rome from 3 to 28 October 2018, convened by Pope Francis.

“This is an event in which the young will be the actors and the protagonists. We will not only talk about “them”, but rather they will recount themselves: with their language, their enthusiasm and their sensitivity,” said Cardinal Lorenzo Baldisseri, the secretary general of the Secretariat of the Synod of Bishops, during the presentation.

Cardinal Baldisseri also spoke about the event as an invitation to listen to young people who “live in difficult situations” and on the “existential peripheries.” Many who often do not have the opportunity to be heard.”

He then said that it will include youth who are “non-Catholics, not Christians and non-believers, because young people will be listened to, as far as possible.”

To this effect, the Holy Father insisted that three young people who have been victims of human trafficking will be included in the group that was invited.

Simultaneous participation in the Pre-Synod on social networks

Alongside the Pre-Synod the General Secretariat of the Synod of Bishops organized a virtual encounter via Facebook for young people between the age of 16 and 29 to share their opinions and discuss the same topics that will discussed in Rome. Their contributions, collected by the moderators of six language groups (Spanish, English, French, Italian, German, and Portuguese) will be brought together with those of the 300 youth gathered in Rome and will be used to draw up the ‘Instrumentum laboris’ which will be given to the Synod Fathers.

“We hope that thousands of young people will participate in the Pre-Synod meeting via Facebook,” explained Bolivia’s Fr. Ariel Bermendi, an official at the dicastery that is organising the Synod assembly and is responsible for digital communication at this Vatican institution. It is the first time that the Holy See is using social media for a meeting of this kind, which shows a change of attitude in the Church’s hierarchy towards these channels, and overcoming their initial distrust and using social media naturally and thinking about its great potential. “We chose Facebook because the groups will be easier to moderate and we can detect “trolls” who may try to disturb the debate and derail the conversation.” Those who are interested can sign up to a language group, where they can discuss topics much like the “small groups” (discussion groups) at the meeting in Rome. The Facebook debates will be closed to the general public and journalists who want to follow what is happening will need to get accreditation. “In the conversation, we will use the same outline of the preparatory document. There will be three main themes with five questions in each. These 15 questions will be associated with a hashtag that will be used to group the various comments. The youth will be able to give voice to topics such as inner life, personal identity, thoughts on vocation, relationship with faith, their position within society and politics,” explained Beramendi.

The Pre-Synod meeting on Facebook to discuss youth issues is a response to Pope Francis’ call that the Church should listen directly to their voices. He made this very clear on 17 January during his encounter with several thousand youngsters at the National Shrine of Maipú in Santiago de Chile. “We Bishops, we are the ones holding the Synod; we are thinking about the youth, but, you know, I worry about “filtering”, because sometimes in order to get young people’s opinions to Rome, you have to make several connections, and so the suggestions can arrive very “filtered”, not because of the airline companies, but because of those who transcribe the suggestions. That’s the reason I want to listen to the youth, and that’s why we are having the meeting of young people, a meeting where you are going to be the protagonists, young people from the whole world, Catholic and non-Catholic youth, Christian youth and youth from other religions, and young people who do not know if they believe or do not believe. All of them, to listen to you, to hear you directly, because it is important that you speak; do not let yourselves be silenced.”

The Church already has responses from 221.000 youth

Almost 51.000 participants, 50.6% of which answered the whole questionnaire are young people between the ages of 16 and 19, “which shows that the younger ones are the ones who expressed a greater awareness of the initiative.”

The most represented continent was Europe, with 56.4%, followed by Central America and South America with 19,8& and Africa with 18,1%.

The data from the questionnaire is being collated and analysed in a scientific manner by the Toniolo Institute of the Sacred Heart Catholic University in Milan.

The document for the work of the ordinary Synod in October will summarise the contributions from four sources: the answers to the questionnaires, the preparation for the event, the documents form the Symposium on youth held in the Vatican in September 2017, the answers of the discussions on social media and the document that will come from the week’s work at the Pre-Synod.

From the Schoenstatt.org editorial team, we repeat not only our support for the “PrayforSynod” initiative, but also the invitation and request to the youth to share their stories, testimonies, concerns, and questions via Schoenstatt.org

Presentation of the Pre-Synod Meeting of Youth

In Covenant Solidarity with Pope Francis

Pray for Synod: are we going to unite with this great initiative?