Sant’Egidio: A community of friends to the poor and the Gospel for 50 years

On February 10th, the Cathedral of Rome’s five naves, and St. John Lateran, were filled with thousands of Sant’Egidio’s people, with the poor who always accompany them in life, and with many friends and many guests.

The occasion was a celebration of the liturgy in thanksgiving for 50 years of the Community that was born in Rome on February 7, 1968 through the initiative of Andrea Riccardi and that has spread throughout the world.

A half-century of “daily listening to the Word,” said Cardinal Parolín in his homily, has been the backbone of the Community’s history.  A half-century in which Sant’Egidio has saved many from exclusion and loneliness as the Lord did with the leper, according to the day’s readings (MK 1: 40-55).  Furthermore the outcasts themselves have become the unheard-of protagonists in the salvation of others.  From the world’s peripheries, people from the Community have worked to beat down the “leprosy” of poverty, illness and war.  “The path of compassion proclaimed by Jesus has been and should always be your way,” said the Vatican Secretary of State.  In this way, the impossible becomes possible; then a miracle of an encounter without limits is produced, capable of mending the torn fabric of the human family.

An image of Christian Europe

After the celebration, Bishop Angelo De Donatis, the Pope’s vicar for the diocese of Rome, greeted those present:  “Andrea and his friends felt that the Lord was asking them to stand before the questions of those who are last, the poor, – with friendship – offering a sign of prophecy.”  For Antonio Tajani, the President of the European Parliament, “Sant’Egidio is a protagonist of subsidiarity, an image of Christian Europe.”  Paolo Gentiloni, First Italian Minister, for his part said:  “Thank you for the coherence with which you have lived the faith always being at the side of those most weak, by your capable presence sounding alarms and offering solutions.”

Friendship makes you a community

Lastly, Marco Impagliazzo, the Sant’Egidio Community’s president, highlighted the value of friendship that “makes of us a community, not a mass-man.”  A community that has made its own the dream of the Gospel, the dream of the Council, which has understood that to transform the world, one must begin with the heart.  “Living a religious passion that becomes a civic passion,” continued Impliazzo strongly affirming that nobody is excluded, that nobody is a stranger:  “Because our words are “everyone is important.”  “Therefore this story has to continue,” he said to close, “because in the world there are many necessities and a mission must be fulfilled also in the future.” 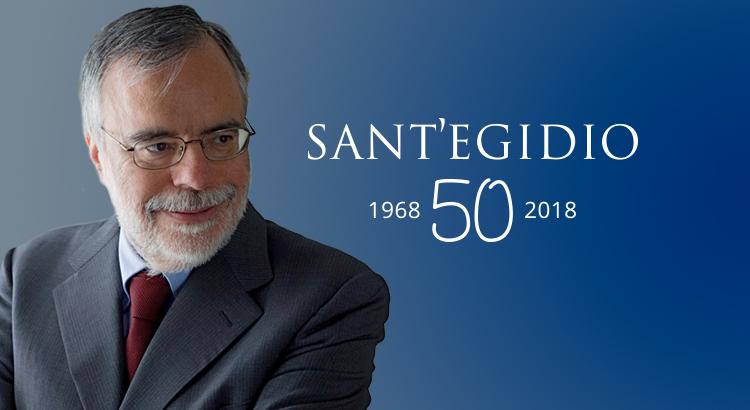 For its 50th Jubilee, the Community of Sant’Egidio brought its logo up to date (although the content, the dove as a sign of peace, continues), and had a re-launching of its official webpage, www.santegidio.org.  As Andrea Riccardi, founder of Sant’Egidio, said in his greeting, the website has been renewed with up-to-date texts on the life and working of the members of the Sant’Egidio Community in the world today: “This website was designed so that the life of the community speaks in many aspects and in its many manifestations that now take place on every continent.  It is a beautiful way of uniting the world and showing that it is possible to live a universal fraternity that includes everyone and surpasses all kinds of borders.  But it is also a very special cultural tool because the information, the news, the reflections, and the ideas come from all over the world.  A culture that unites and does not divide, a culture that listens to the peripheries, from the peripheries, and that opens up new vistas creating interest, dialogue, solidarity, and friendship.” 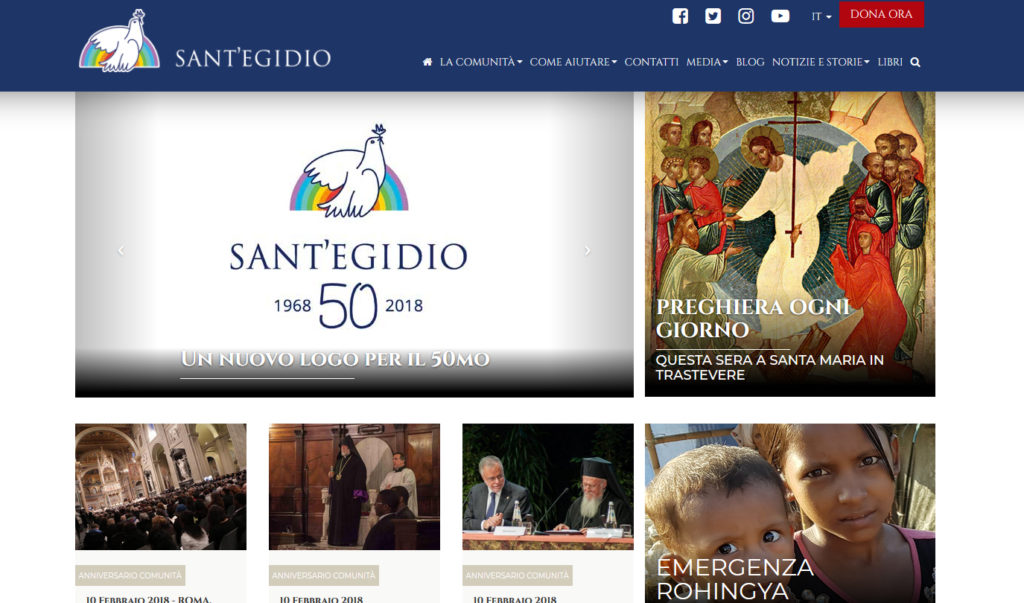