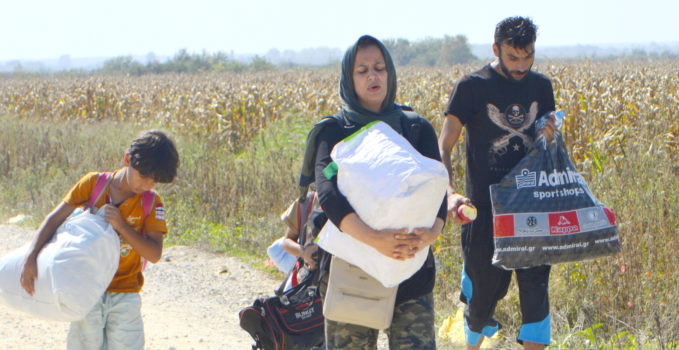 “More than 3,100 people have already drowned in the Mediterranean this year.  Now for the first time, Italy’s military has brought refugees directly from Libya.  The Italian Church makes this possible,” according to a message that went around the world on Christmas Eve.  Italy’s Church in collaboration with the Community of Sant’Egidio, a small and highly committed ecclesial movement founded in 1968.

Andrea Riccardi, founder of the Community of Sant’Egidio, received an audience with Pope Francis on the morning of December 22, 2017.

In addition to an exchange of Christmas wishes on the eve of the fiftieth anniversary of the Community, the topics of hospitality and the integration of immigrants and refugees, in particular with regard to the humanitarian corridor, that now can be considered not just for Italy, but also as a model for all of Europe.

Other questions related to the deployment of Sant’Egidio on various continents were addressed, such as work for peace and more generally concern for the poor and those on the peripheries.

“This is a truly groundbreaking development,” said UN envoy for the Central Mediterranean, Vincent Cochetel.   Italy’s Interior Minister, Marco Minniti, also spoke after the first refugee flights of this “historical moment.”  For the first time, a humanitarian corridor has been opened to bring recognized UNHCR refugees out of illegality.  Cardinal Gualtiero Bassetti, chairman of the Italian Bishops’ Conference, sees the humanitarian corridors as a fundamental way to save many people.

This is the goal of the humanitarian corridors, a concept developed jointly by Italy’s Ministry of the Interior and the Bishops’ Conference.  First they wanted to enable safe and legal entry, and then ensure better refugee integration with long-term support.

Italy’s bishops and the government in Rome agreed to a two-year arrangement in January.  The deal is financed from Church tax funds.  Parishes, families, religious organizations, and aid organizations assisted with needed accommodations.  This is Covenant culture at the service of the poorest and most vulnerable, and moreover, perhaps the best advertisement for the Church in these turbulent times.

The pioneer of the humanitarian corridor is Sant’Egidio.

“In the spirit of mercy, we embrace those who are fleeing war and hunger or who are forced to leave their country because of discrimination, persecution, poverty and environmental degradation.

We are aware that it is not enough to open our hearts to the suffering of others. Much needs to be done before our brothers and sisters can live in peace in a safe home again. The inclusion of the other requires concrete commitment, a chain of support and benevolence, a watchful and understanding attention. ”