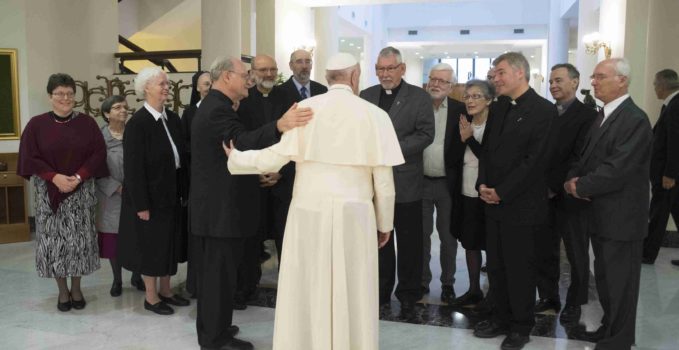 Posted On 2017-10-28 In Church - Francis - Movements, Covenant solidarity with Francis

A fire that calls for change: encounter of Pope Francis with the International Schoenstatt Presidency

Three years and a day since the jubilee audience in Paul VI Hall, on 26 October, that audience when Pope Francis gave us the motto for Schoenstatt’s second century: a culture of encounter is a covenant culture, and this creates solidarity. Casa Santa Marta’s chapel doors were opened to the members of the International Schoenstatt Presidency gathered in Rome at their annual gathering. They had the privilege of participating in the Holy Father’s Morning Mass.

“It was impressive to see the change in Francis as he began to preach. Before he was very calm, he developed a fire, an impressive vitality, he spoke passionately,” Fr. Egon Zilleken commented in a call to the schoenstatt.org team. He spoke about of his favorite subjects – the change of life, the real conversion, from an encounter with Christ’s fire, the fire enkindled in the encounter with Christ. “The difficulties in our lives are not resolved by watering down the truth. The truth is this: Jesus has brought fire, and struggle. What am I going to do?” (Pope Francis, Homily 26 October 2017)

After the Mass, each person greeted the Holy Father, beginning with Fr. Juan Pablo Catoggion – the two have known each other for many years and the photos transmit the fire of the encounter. Fr. Juan Pablo gave the Holy Father a Heavenwards and a card with the signatures of all the members of the Presidency. 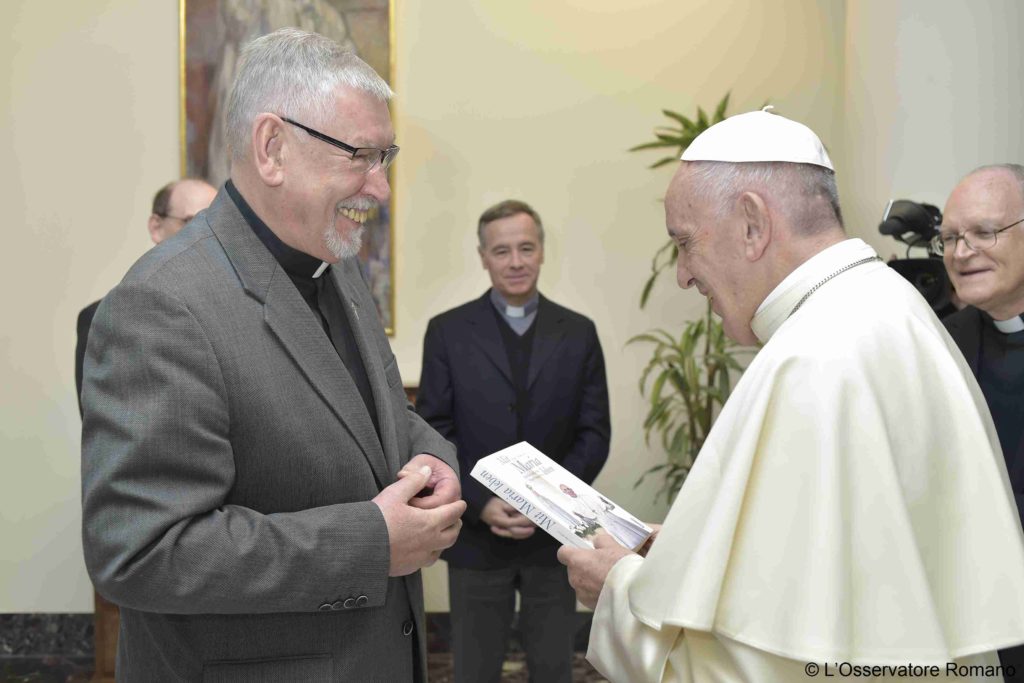 Fr. Egon Zillekens, speaking Spanish with the Pope,  presented him with the German edition of the book emerged from Fr. Alexandre Awi’s great interview about Francis’ attachment with Mary. “Now you also have it in German,” Fr. Egon said, knowing that the Pope already had the book in Portuguese and Spanish. The photos show how the Holy Father looked at the book gratefully and thumbed through it… This moment was worth all the effort of translating and distributing this book, this treasure about Francis’ covenant with the Mother of all of us.

Concluding the brief encounter, the mandatory group picture was taken. 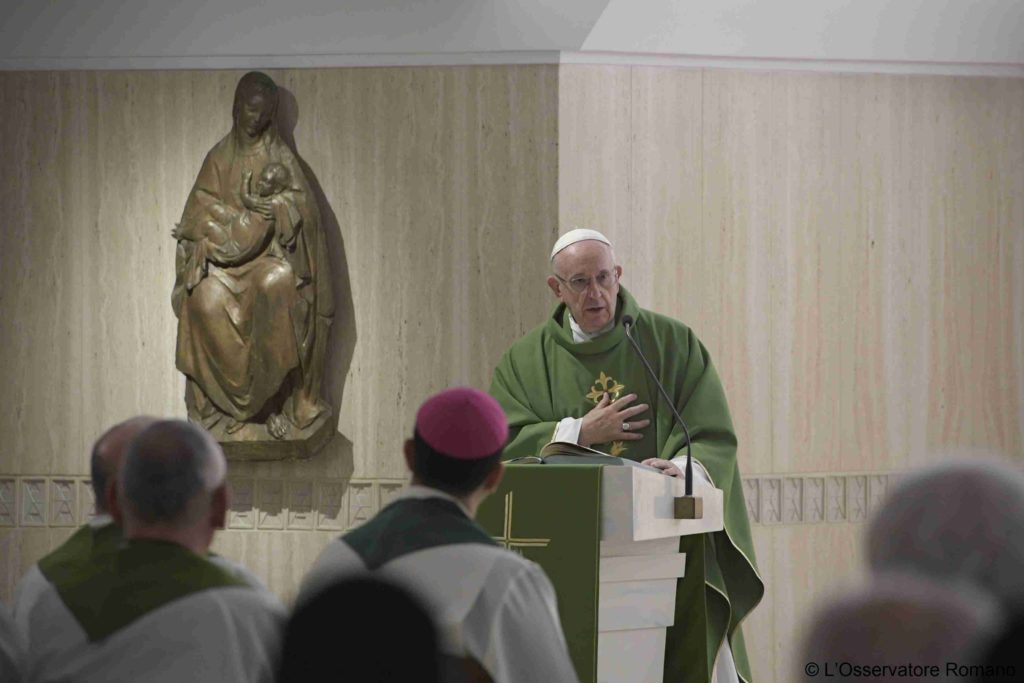 (Vatican Radio) “Jesus calls us to change our lives, to change paths, calls us to conversion.” And this means fighting against evil, even in our own hearts, “a struggle that does not give you ease, but gives you peace.” That was the message of Pope Francis in his reflection during the morning Mass at Casa Santa Marta. Inspired by the day’s Gospel, Pope Francis explained that this is the “fire” that Jesus sets on earth – a fire, he said, that calls for change:

“Changing our way of thinking, changing our way of feeling. Your heart, which was worldly, pagan, now becomes Christian with the strength of Christ: to change, this is conversion. And changing your manner of acting: your works must change.”

It is, he continued, “a conversion that “involves everything, body and soul, everything.” Pope Francis emphasized:

“Easy-going Christians, who don’t fight, don’t exist,” the Pope added. “Those are not Christians, they are lukewarm.” The tranquility necessary for sleep can be found “even with a pill,” he said, “but there are no pills” for inner peace. “Only the Holy Spirit,” can give “that peace of the soul that gives strength to Christians.” And, he said, “We must help the Holy Spirit,” by “making space in our hearts.” A daily examination of conscience “can help us in this,” the Pope said. It can help us “to fight against the maladies the enemy sows,” which he called “maladies of worldliness.”

“The fight Jesus wages against the devil, against evil, is not something old, it is a modern thing, a thing of today, of all days,” Pope Francis said, because “the fire that Jesus has come to bring us is in our hearts.” And so we must allow Him to enter, and must “ask ourselves, each day: how have I passed from worldliness, from sin, to grace? Have I made room for the Holy Spirit, so that He could act?”

“The difficulties in our lives are not resolved by watering down the truth. The truth is this: Jesus has brought fire, and struggle. What am I going to do?”

For conversion, Pope Francis concluded, “a generous and faithful heart” is needed: “generosity that always comes from love,” and “is faithful, faithful to the Word of God.” 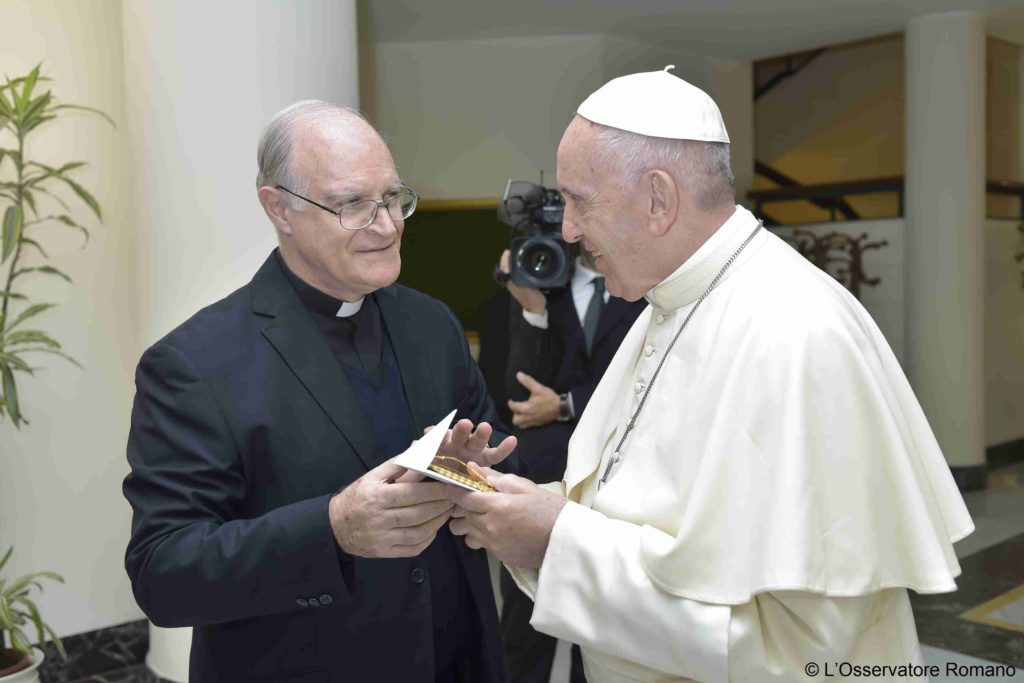 The photos are from the Osservatore Romano and are under copyright; schoenstatt.org has acquired the publication permission. The photos may not be copied for publication in other media. If you are interested in a publication (online, print …), please contact [email protected] The costs depend on the medium.

All photos can be found at www.photovat.com. On this page you can also order photos for personal use.