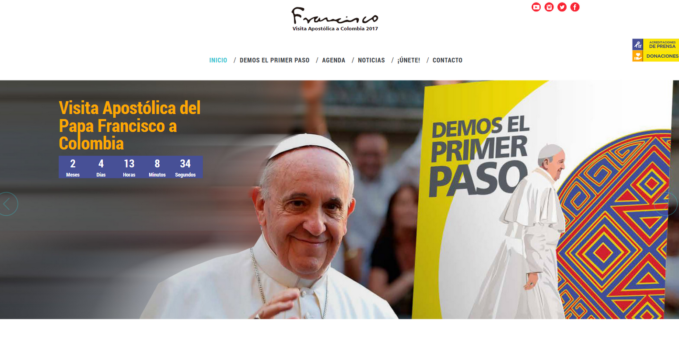 On September 6 at 4:30 pm, Pope Francis will arrive in Colombia to begin a 4-day agenda of visits that include the cities of Bogotá, Villavicencio, Medellín and Cartagena.

The Schoenstatt Youth from Bogotá will go with Sr. Amparo, their flags and t-shirts to Bolívar Square, where Francis will give a blessing from the Archbishop’s Palace, and then they will participate in the Eucharist that the Pope will celebrate in Simón Bolívar Park. There they will join a large group of the adult Branches also wearing distinctive t-shirts.

The entire Colombian Schoenstatt Family is praying for the Pope’s arrival, and a few days ago they began a family novena, praying that his visit will bring peace to Colombia, and change the hearts of those who have bled the country with corruption at all levels that has already reached the level of the Judiciary’s magistrates.

His agenda: reaching out to all

Pope Francis’ first greeting to the Colombians will be Thursday, September 7 at 9 am in Plaza de Armas de la Casa de Nariño. Then a meeting is planned with the President Juan Manuel Santos Calderón, at 9:30 am.

That same day, he will bless the faithful from the Archbishop’s Palace, where he will also meet with the Bishops.

In the afternoon, he will meet with the steering committee of the Latin American Episcopal Conference (Spanish acronym CELAM), and he will conclude his first session in Colombia with the Eucharistic celebration in Simón Bolívar Park at 4:30 pm.

Nativity of Mary in Villavicencio

On September 8, the Nativity of Mary, the Holy Father will travel to Villavicencio, where he will celebrate Holy Mass at 9:00 am. At 4:00 pm, he will preside at the large Prayer Gathering for National Reconciliation in Las Malocas Park.

At 5:20 pm, he will visit the Cross of Reconciliation monument in Parque de los Fundadores, all of this in Villavicencio. Then the Holy Father will return to Bogotá to spend the night at the Apostolic Nunciature.

In Medellín with the children and the Angelus from Cartagena

On September 9, he will go to the city of Medellín; Francis will celebrate the Eucharist at 10:00 am in Olaya Herrera Airport. At 3:00 pm, he will meet with the community residing at St. Joseph’s Home that provides shelter for children and youths from the allover the country who do not have a place to live. Finally he will meet with priests, religious, consecrated persons, seminarians and their families in Macarena Coliseum. As he has done previously, the Pope will return to Bogotá to rest.

The official closing of the official agenda of Pope Francis’ visit to Colombia will be in the in the walled city at 4:30 pm in the Contecar facility, where he will celebrate Holy Mass.

The Colombian people eagerly await Francis’ visit within the framework of the peace process that has been experienced over the last several years. A bit of the official Hymn for the visit expresses it well:

We await you with open doors

Our souls willingly receive your blessing.

in the midst of barriers and chaos

we want to offer our song.

you bring us words of truth,

and our people will know

how to find God in freedom.