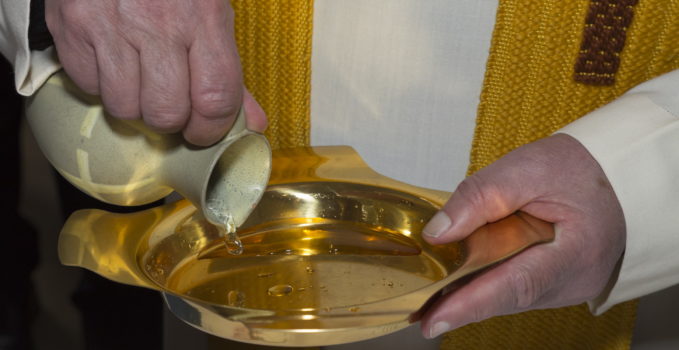 He himself believed, along with his whole household (Jn 4,53): A breath of the early Church in a tired Europe

His nose just about reached the rim of the baptismal font if he stretched hard enough. It didn’t satisfy him, so he hopped and jumped again and again while his eyes shone with irrepressible joy and impatience. During the Litany of the Saints we would have loved to pour over him a whole bath of baptismal water and soak him in a completely unorthodox way. … The sight of this young catechumen, and the thought of the bath of baptismal water, gave rise to so much joy that I simply turned to my neighbour with a smile and said, “Easter! That is Easter!” My neighbour replied, “Can you feel the Holy Spirit?”

The broadly smiling parish priest and a few sponsors were standing around the baptismal font with eleven people. Above them burnt the Easter candle. A baby in the arms of his young mother, four little boys, the other young people and adults. Their faces were serious and filled with expectation, yet they shone with joy.

It was the 8 July, and we weren’t in Africa or China, where the Church is so young and vital. We are in the heart of Europe, in the centre of Germany, surrounded by a vital, but very normal parish community.

The people at the baptismal font, with whom we had all renewed our baptismal promises shortly before, were two complete families. Just over a year ago they had arrived at this place after a long and difficult escape from Afghanistan. New neighbours. Eleven people from what people call the flow of refugees, or refugee crisis. New neighbours become new Christians. Eleven were baptised, six were confirmed and received their First Holy Communion. … They were anointed as kings, priests and prophets.

For the promise is for you, for your children, and for all who are far away, everyone whom our Lord God calls to him (Acts 2,39)

They simply arrived for Mass every Sunday. One of the parishioners spoke to them. Mohammed and Farina and Ibrahim… who have now added Mary as their Christian name, and Peter, Paul, Raphael, Luke and …

Even while they were in Afghanistan they had repeatedly thought about the Christian faith. It was a longing, a questioning … and there were local people who dared to tell them about Jesus. Ultimately it is the Holy Spirit who touched their hearts so strongly that on this humid July evening a breath of the wind of renewal, the breath of the Holy Spirit who makes all things new, blew through the nave of this church in the heart of tired, old Europe. It was so powerful that not only the faces of the Afghan refugees, but also many other faces, shone with the joy of the Gospel while eleven baptismal candles burnt on the altar.

They and their whole household believed

We celebrated for a long time with bread and wine, olives and the breath of God’s Spirit around us. He believed along with his whole household. Is this the way the Church will become new again? Will we experience it in this Europe filled with a sense of doom, exhausted by trying to save collapsing structures?

Day by day the Lord added to their number those who were to be saved (Acts 2,47)

We will experience it. We are already in the thick of it.