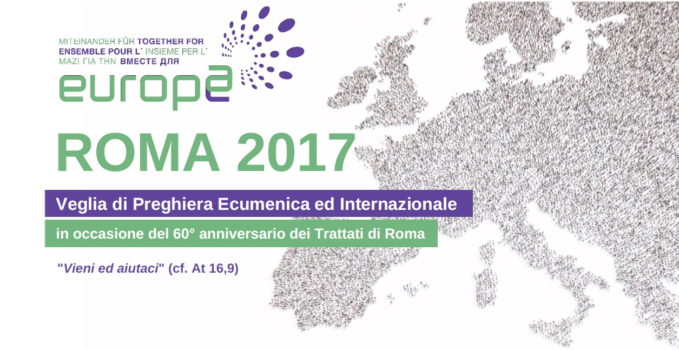 Together for Europe, Beatriz Lauenroth •

The “European Adventure” officially began 60 years ago with the signing of the Treaties of Rome. On the 25th March 1957, France, the Federal Republic of Germany, Italy and the Benelux Countries signed a series of contracts laying “the foundations of an ever-closer union among the peoples of Europe“ (Preamble to the Treaty).

Today once more, the focus will be on Rome. On the 25th March 2017, European Heads of State will meet in Rome to offer a sign of unity in the context of a continent in crisis, where steps towards integration run in parallel with battling national interests. A dynamic of continuous renewal is imperative to resolve the global issues of today (among which, the influx of migrants into Europe, demographic changes, Brexit, historic cultural and economic differences between Eastern and Western Europe, different interpretations of democracy and so on).

At present, Rome is the epicentre of a range of initiatives which– in spite of the above challenges – all affirm a “Yes” to Europe. In this context, on the 24th March 2017 at 7.30 pm, Together for Europe will gather for an evening of Ecumenical and International Prayer in the heart of Rome in the Church of the Twelve Holy Apostles (Basilica dei XII Apostoli). Among the ecclesial and political representatives who have so far confirmed their attendance are Cardinal Kurt Koch, President of the Pontifical Council for Promoting Christian Unity, Bishop Nunzio Galantino, the Secretary–General of the Italian Episcopal Conference, Mons. Siluan, Bishop of the Romanian Orthodox Church in Italy, Heiner Bludau, Dean of the Evangelical Lutheran Church in Italy, Andrea Riccardi, historian and founder of the Community of Sant’Egidio, Gerhard Pross, moderator of Together for Europe, Markku Markkula, President of the European Committee of the Regions. This hour-long celebration will have musical accompaniment provided by a choir composed of members of different Ecclesial Movements and Communities, and a Romanian Orthodox Choir.

The initiative promoted by Together for Europe connects 50 cities across Europe (from Lisbon to Szeged, from Brussels to Matera, from Paris to Ljubljana) in a European chain of prayer, with the objective of showing that – in spite of cultural and denominational differences – brotherhood and unity are possible. Together for Europe, which counts the involvement of over 300 Communities and Movements, has been announcing and witnessing to such values and ideals for the past 17 years. With its years of experience and its ardent desire for a united Europe and united World, the Ecumenical Network offers an important contribution to building a Christian Humanism with mutual respect and dialogue at its heart, giving life to new models of collaboration among individuals, social groups, cities, and States and bringing Europe closer to being a “family of peoples”.

Tags : Europe, Rome, Together for Europe