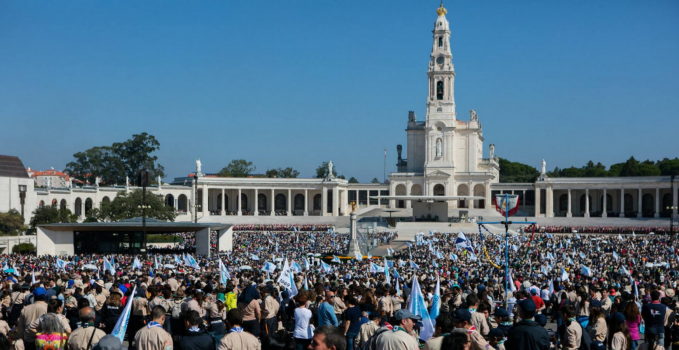 With Mary, pilgrim in hope and in peace: Francis in Fatima

VATICAN/FATIMA, via AICA, with editing •

“On Monday, the Holy See Press Office presented the logo and motto for Pope Francis’ visit to the Shrine of Our Lady of Fatima in Portugal on 12-13 May, on the occasion of the centennial of Mary’s first apparitions to the three shepherds. The logo represents a rosary that forms a heart and the motto is “With Mary, pilgrim in hope and in peace.”

During a conference held in Portugal, Fr. Carlos Cabecinhas, the rector of the Marian Shrine, explained that the Pope will come on pilgrimage to the Fatima Shrine to pray with pilgrims who accompanied him here and through social media,” At the same time, it will be a visit of “thanksgiving for the gift that Fatima represents to the Church and the world,” and “it will allow us to hear the Pope’s prophetic voice. That many will go the shrine will go “to see him and pray with him” is expected he pointed out and recalled what Pope Benedict XVI said, “The shrine “is Portugal’s spiritual heart.”

Fr. Cabecinhas also indicated the “subject of peace” allows uniting Francis’ pontificate to the Fatima message,” this in a historic time in which the Holy Father affirms that a third world war is developing in stages. Moreover, he added, the logo highlights the Holy Father’s “style of simplicity and clarity.”

Francisco Providencia designed the logo; it depicts the rosary beads ending in a cross, and its interior is inscribed with “Pope Francis-Fatima 2017” and the visit’s motto. The artist, Francisco Providência, said, “We sought to value the physical and friendly closeness of [Francis] who is smiling and waving his hand in a gesture of greeting and blessing.”

Fr. Cabecinhas went on to explain that the official program for the visit would be presented about “two months prior to the trip.” He did affirm that “the Pope would go directly to Fatima, thus, the visit will not start in Lisbon,” Portugal’s capital.

The Virgin Mary appeared to three shepherds children, Lucia dos Santos, Jacinta and Francisco Marto, between 13 May and 13 October 1917. Throughout Our Lady’s six apparitions, a series of messages were given to the children where she warns about the growing attachment to sin, the denial of God in the modern world, and the need for conversion and prayer of the Holy Rosary asking forgiveness for sins and for peace in the world. She also announced the end of the first worldwide conflict, World War II, the spread Russia’s errors throughout the world, its conversion, and the triumph of the Immaculate Heart of Mary.

In the years after the apparition, a formal investigation process took place, which ended in 1930 when the Bishop of Leiría approved the devotion to Our Lady of Fatima.

Pope Francis will be the fourth pontiff to go on pilgrimage to the Marian shrine. The first was Blessed Paul VI on 13 May 1967, when the world celebrated the 50th anniversary of the first apparition of Our Lady of Fatima.

The second one was St. John Paul II, who visited Fatima on 13 May 1982, on the first anniversary of the assassination attempt he suffered in St. Peter’s Square. He visited Fatima to express gratitude to the Blessed Mother for protecting him, and he returned to the shrine again in 1991, in gratitude for the ten years of being “saved” by Mary’s maternal hand and later during the Jubilee 2000, he returned to beatify the seers of Fatima, Francisco and Jacinta Marto.

Pope Benedict XVI also went on pilgrimage to the Fatima Shrine on the 13 May 2010, when he celebrated a massive Mass to commemorate the 10th year of the little shepherds’ beatification.

The Shrine of Our Lady of Lourdes is also preparing a program to celebrate the jubilee year of the Fatima apparitions centennial.

Pope Francis’ will be accompanied in Lourdes with a live transmission from Cova da Iria.

“Each Shrine reveals one part of Mary’s mission, and each one has a particular charism without entering into contradiction with the charisms of the others,” states a document sent by the Shrine of Lourdes to the Press Room of the Shrine of Fatima.

The Marian Shrines want to unite to celebrate a message that “belongs to all.”

“When a Shrine celebrates its jubilee, all the Shrines dedicated to Mary rejoice with the meaningfulness of the message carried by all. The Shrine of Lourdes intends to celebrate Mary by receiving pilgrims who arrive there, either as they are on the way to Fatima or when they come back,” the same document explains.

To do it in the best possible way, the Shrine of Lourdes prepared a special program, from May to October, including: an exhibition of the big Marian shrines, Marian processions with the images and/or statues of Our Lady of Fatima, and the presentation of a movie of the Apparitions in Lourdes and in Fatima.

Throughout the year, the 11th of each month will be especially celebrated, centered on Our Lady of Lourdes; the 13th of each month, evoking Our Lady of Fatima and, in May, the transmission of the celebrations of the international anniversary pilgrimages where Pope Francis will preside. During this month, the eyes of Lourdes will be centered on Fatima from the 11th of May, with a meditation of the Rosary in the Grotto and recitation of Our Lady of Lourdes, followed by the procession of candles. On Friday the 12th, a Eucharistic procession will take place with the prayer of the Angel of Portugal, followed by a Prayer Vigil in Saint Pius X Basilica, in union with Fatima. On the 13th, a rosary will be meditated on the Fatima Message with the recitation of the apparitions of Our Lady in Saint Pius X Basilica and transmission of Pope Francis’ visit to the Shrine of Fatima on big screens. This communion with Fatima ends with a celebration of a thanksgiving Mass for the intentions of Pope Francis, on the 15th. It should also be mentioned that on the 12th and 15th of each month, time for a penance will be celebrated for the reparation of the sins committed against the Immaculate heart of Mary, followed by a Mass for the conversion of sinners and confessions.

During this year, on the 13th of each month, the program of the French Shrine is fully directed towards Fatima beginning with the consecration to the Immaculate heart of Mary, followed by a Mass for the intentions of the Pope and consecration to Mary, recitation with the apparitions of Lourdes and Fatima (video), commented exhibition and candlelight procession.