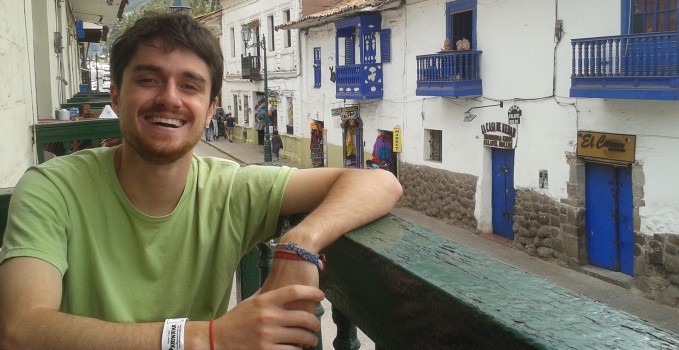 Today Octavio Cezarini Ávila responds: He currently lives in Curitiba and works in public relations. In the archdiocese, he collaborates in Pastoral de los Migrantes [Migrant Ministry], and he accompanies the Boys’ Youth from Ibiporã from a distance •

Six months into the pilgrimage through the second century of the covenant of love…what is your dream for this Schoenstatt in who we are and where we find ourselves in the Church, in the world, and in our mission?

I dream of a Schoenstatt that renews its commitment with the covenant culture reaffirming its charism of attachments and one that will increase its commitment with the Church. More than being a support for the Pope, it should support the local Church in its pastoral dimensions. This is the most efficient way to be close to the poor, the favorites of the Gospel. However I do think that it should not only be a pious gaze of help, but it is also necessary to incorporate ourselves in the proper being of the Movement. We are an educational Movement, aren’t we? Then I believe that it is necessary that we incorporate everyone in the Schoenstatt pedagogy, while at the same time allowing it to be touched by these new realities. The world needs the Movement, but the Movement needs to be in movement. This play on words is the reflection of a mind that has dreamed very much about the spirit of solidarity burning in the hearts of Schoenstatters. Are we on fire or are we indifferent?

First look at the novelty of Francis. The reality of sexual morality is a doctrine in the Church, which is supported by the Pope, but why do we insist on accenting this in our meetings and informal conversations to the detriment of social morality? Francis has the dimension that both are equally important, but he emphasizes social morality, because he truly feels the painful reality of Latin America. We are so unaccustomed to this that the Pope has even been called a “communist.” We need this in the Church…as shepherds that touch their sheep and who cry and laugh with them. In my opinion, at this time, we are neglecting social morality a little.

A second point refers to an intellectual process, and for this we will need our theologians and those interested in Kentenich’s philosophy. Just as the Marxist constantly update Marx, the Weberians update Weber, it is necessary to update the Father and founder to keep him alive, even in the academic realm. It is necessary to revise our “didactic books” for the youth and the couples, for the men and mothers, and to look at the new ways that they are emerging in society. What does consumerism have to do with this, or is it only the media that has influence? For example, the work relationships in the 21st century, the Internet and the compression to time – space, should be confronted with Father Kentenich and new responses should be extracted from there.

You reaffirm what we rightly say: we are missionaries. Schoenstatt is a missionary Movement, and I reaffirm this through the Brazilian experience. How the missionary activity rekindles the spirit of our Schoenstatt Family! However the mission presupposes more “listening” than “announcing.” We should not be compared to those who knock on doors and ask: “Do you have a minute to hear something about Jesus?” but rather, we should be those who ask: “Do you have a minute to tell us something about yourself?” It is an essential difference that renews us; it eliminates our preconceptions and it opens one to love. The announcement is a dialogue per se.

This missionary characteristic could be applied to different situations. It would outline a road; in the Pentecost Conference (2015), we reaffirmed our priority for the family and for the youth. It is necessary to listen to the members of the Movement, and to those who do not belong if they have good will. The best way is to insert our being into the corners of society through the Schoenstatt Rosary Campaign. The organized Movement needs to commit itself more to it, but only if is rooted in the life of the community. It is also interesting to open us to diocesan structures, such as pastoral areas, ministries, courses and commissions. Mary, open the roads!

In the photo, I am with some boys loading food for a Schoenstatt Youth from Curitiba project called “Projeto Pão” [Project Bread]; last week, we distributed food to street people.