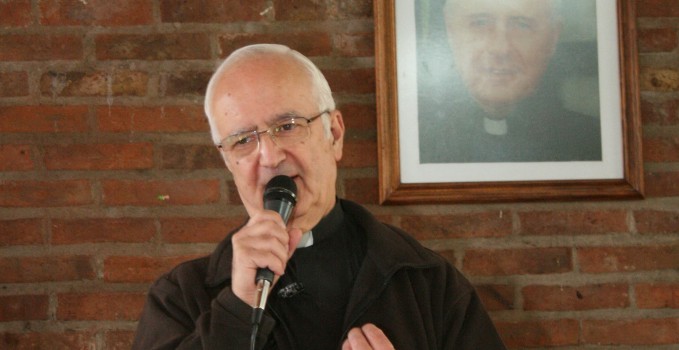 Today: P. Alberto E. Eronti answers: He is from Florencio Varela, Argentina, and he is a first generation Schoenstatt Father in Argentina •

Six months into the pilgrimage through the second century of the covenant of love…what is your dream for this Schoenstatt in who we are and where we find ourselves in the Church and in the world, and in our mission?

If, as some affirm, Schoenstatt’s first century was a time of founding, structuring and consolidation; at least at the beginning of the second century, we should accent the charismatic and missionary dimension of the Family more. It should be a century of expansion. (As Pope Francis would say, “to go toward the peripheries.”)

The expression “Schoenstatt going forth,” should not be a mere phrase or a beautiful motto, it should be a pressing need. Since Saint Paul wrote: “The love Christ impels:” we should say: “The Covenant of Love impels us.”

What we have to avoid is “quenching the Spirit.” This is the danger in accenting what is known so much that we lose docility to the “new of the Spirit.” I have seen many Church communities that began forcefully, and they were weakened because of their inability to adjust their mission to the times. This demands a healthy capacity for criticism and an immense hope.

Schoenstatt was born as a charismatic Movement; its force was overwhelming during the first decades. Father Kentenich’s “favorite secret idea” found minds and hearts that assumed it, and they structured it by projecting it.

The Pope refers to one of the dangers of the Church and its communities as “self-centeredness,” which is what made many foundations true spiritual “clubs” instead of missionary forces. In one hundred years, the world has made an abysmal change (Father Kentenich called it “epic”), the Church has been and is called and required to adjust. The Movements and the New Communities are the last great work of the Spirit according to the new times.

In the Founder’ words “we must seek war,” that is, we must go to the front – like the first sodalists – to live, proclaim, and offer the Covenant of Love with Mary to everyone. In this strategy, the Shrines must be “the capitals of the New Evangelization, the Schoenstatt Rosary Campaign, the source of grace through the way of the world, and the communities of the Family, its soul. In Father Kentenich’s words: “Go and set the world on fire” with the fire of love, of the Covenant of Love.