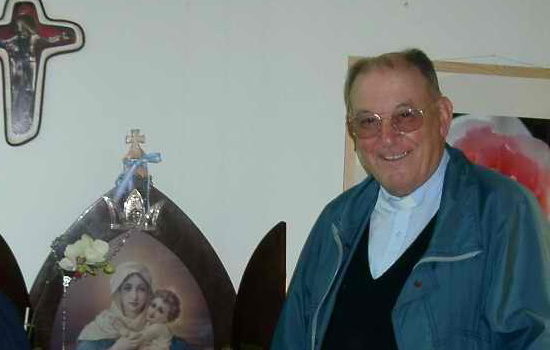 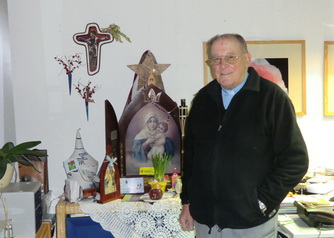 We had to erase a box from the schoenstatt.org weekly newsletters’ mailing list. One of the first people who subscribed and who many times expressed gratitude for receiving it: Fr. Raúl Molaro, from the Archdiocese of Paraná, Entre Rios, a member of the Schoenstatt Institute of Diocesan Priests, died on 8 August 2018. —

The 83-year-old priest died in Villaguay, where he had been pastor of Immaculate Conception parish for several years.

He was born in Paraná on 3 January 1935; he was baptized the same year at Sacred Heart of Jesus parish in his native city. He was ordained a priest in the Cathedral on 18 December 1960, by Archbishop Zenobio Lorenzo Guilland, along with his brother César, who died a couple of years ago. In 2010, both of them celebrated the Golden Anniversary of their ordination with the title: “100 years of priesthood – Saviors like Jesus.” 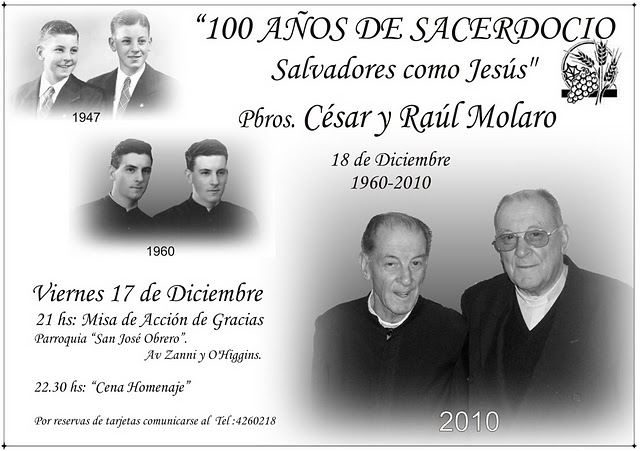 A heart of gold

“Father Molaro had a heart of gold. He was tender, compassionate, wanting to do the good. We shared three years when I was pastor at the Miraculous Medal parish, and he resided there. During that time, I got to know him better and I learned to love him very much,” Fr. Fabián Castro related.

Fr. Raúl carried out his priestly ministry in several parishes and cities in the Archdiocese of Paraná. Upon returning to his native city, he was parish vicar of the Cathedral until 1969 and of Sacred Heart of Jesus until 1973.

His first destination as pastor was at Santa Lucía (Paraná), from 1973 to 1984. His mortal remains rested here before the rite of Christian burial. In May 1984, he was appointed pastor of Our Lady of Carmen Basilica, in Nogoyá, where he remained until 1993.

Sabbatical a time for study

Fr. Fabián, who accompanied him until his final days, recalled that “many times his personality got the best of him, but when he realized that, he exceeded himself in some word or gesture, he asked forgiveness, and he built bridges again. He was always interested in others, and he tried to help in everything: in silence and concerned for others.”

In 1994, he took a “sabbatical” in Rome, where he took some courses in Theology and Ministry at the University of St. John Lateran. Upon returning, he became parish administrator at Mary Help of Christians parish in María Grande. From 1996 to 2004, he was pastor of Immaculate Conception in Villaguay.

Then he returned to Mary Help of Christians where he was pastor until 28 February 2009, when he resigned because of health reasons, and he went to reside at Our Lady of the Miraculous Medal Parish in Paraná for six years. He lived his final years at the Archdiocesan House for priests.

Fr. Castro concluded, “But, above all, – what I want to stress of what was most impressive about him: was his profoundly priestly heart. He was a man of personal prayer who was restless for the good of all souls. He was a priest who always willing to evangelize with creativity throughout his life. And, when he “retired” from the active life in a parish, he did not retire from priestly activities. He always had something to do on his agenda: confessions, visits to the sick, helping other priests in their pastoral tasks. And especially, intercession through prayer.”

He loved the Blessed Mother and Fr. Kentenich

There was an event that identified him profoundly. On 3 August 1986, in Mount Moriah (Schoenstatt, Germany), he made his definitive contract that transformed him as a member of the Schoenstatt Institute of Diocesan Priests.

A tender and deep love for the Blessed Mother and a community of priests with whom he shared many activities. Fr. Castro pointed out that those who knew him were witnesses of how he returned radiantly from those gatherings with his brothers from the Movement.

His library was filled with books about the Movement and Fr. Kentenich. And they were not dusty: he was frequently seen reading, underlining, and meditating on them.

Fr. Raúl wrote to the schoenstatt.org editorial team on 13 December 2010, a few days before his golden anniversary of priesthood: “Above all I want to thank you for the Schoenstatt newsletters that you send me periodically. This helps me to discover how the Blessed Mother works in so many noble and generous hearts around the whole world.

I celebrate Holy Mass on the 18th of every month in the La Loma Shrine. Last 18 October, it was celebrated with all of the Schoenstatt Family from Paraná, along with the new Adviser, Fr. Ricardo Ablade. The reason for this email is to request, if possible, for the international Schoenstatt Family to join in a Magnificat of gratitude to our Mother and God the Father: Next 18 December, my brother Fr. César and I will celebrate our Golden Anniversary of Priesthood. I ask prayer for us in the Original Shrine.

We shared the priestly ordination of Fr. Alan Sosa in San Luis with several priests from the Institute. During the first week of February 2011, I will be in Mount Moriah for a Course meeting.”

Fr. Raúl, this week you will appear in the schoenstatt.org newsletter that gave you so much joy. And we will take you to the Original Shrine, singing this Magnificat that you asked of us so often.