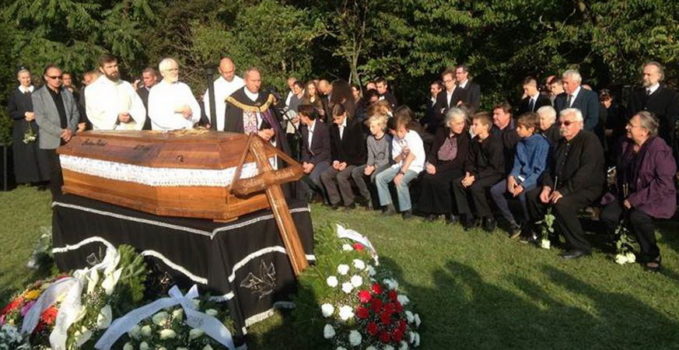 “We built with our own hands”

Róbert Gódány was buried on September 29, a child of Schoenstatt’s founding couple in Óbudavár/ Hungary, the Gódány Family’s home village, where the Schoenstatt Center also was built. Approximately 700 people attended. Besides his large family, a large part of the Schoenstatt Hungarian Family gathered, despite that it was celebrated on a weekday afternoon. Schoenstatt Movement supporters also attended to pay a final tribute to Róbert Gódány. One example of someone in attendance was the representative of the Budapest city council, who has already participated in Family gatherings.

The coffin was in the family Home Shrine until shortly before the burial, where everyone could bid him farewell. At 3:00 pm some men from the Movement took him to the shrine located a hundred meters, followed by the entourage of mourners. The coffin was placed in front of the shrine; a soft autumnal sun shone throughout the ceremony celebrated outside of the shrine.

The square in front of the shrine was reserved for the large Gódány Family. Rita Gódány, his wife and their five children, daughters-in-law and sons-in-laws and twenty-three grandchildren were on the first row. 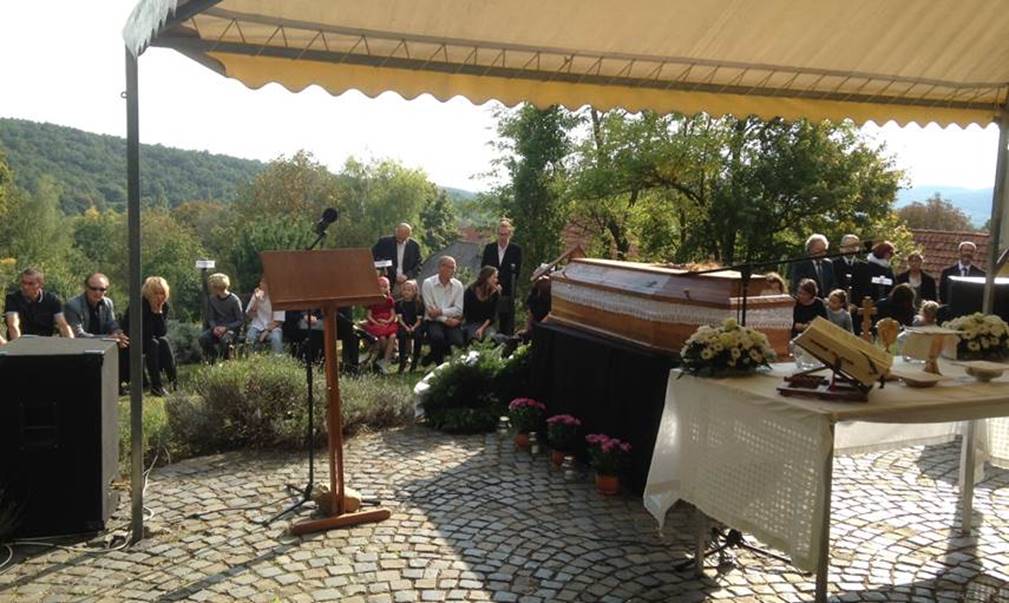 When I am weak, I am strong

The local pastor celebrated the Mass; the children and grandchildren of the Gódány Family read the readings and petitions. The youngest daughter, who expressed a spontaneous petition, especially touched me. She had Paul’s experience, described in the Bible: “When I am weak, I am strong.” The father’s weakness during the last months of his serious illness, kept them as children, closer to him; may that closeness be maintained beyond death.

A spur-of-the-moment Movement choir assembled and accompanied the Mass in a simple, profound way, Hungarian style. After the Mass, Kálmán Csermák, his course brother of the Family Federation and Fr. Péter Csermák’s father, spoke on behalf of the entire Movement.

He talked about Róbert Gódány’s life and character in detail; it was a real tribute.  Then Bruno Mucha, who along with his wife is the national president of Austria, spoke representing the Movement from Austria. Moreover Eva and Rich Berger, another couple, St. Kinga and St. Beat-Maria arrived from Vienna. 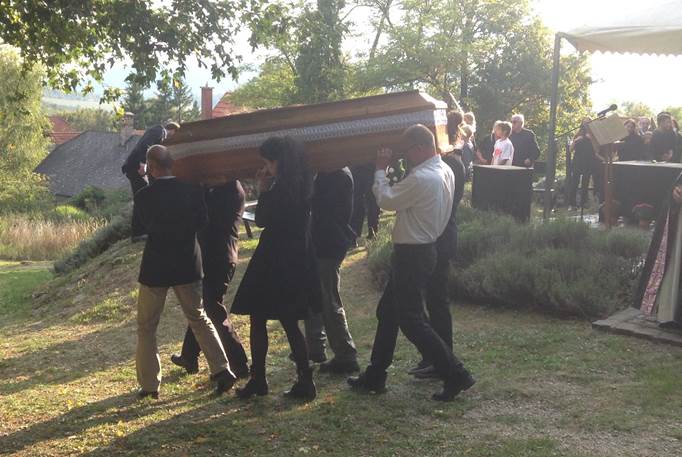 A moving tribute and enchanted place

Then some children and grandchildren carried their father and grandfather’s coffin to the town cemetery. Among them was Judit, age 20. I had never seen a young person helping carry a coffin; it was touching. The coffin was lowered into the ground at the cemetery. The oldest daughter, Maria, was there. The autumn atmosphere and the wonderful and warm sun somehow gave the place an enchanted quality, in such a way, that Maria murmured: Isn’t this pretty?”

Péter, one of the Gódány Family sons, gave a eulogy about his father. It was the highlight of the celebration. Péter had to pause and regain his composure several times, to be able to endure. It was an excellent speech in a literary and artistic sense. He addressed his father in a personal way, inserting many questions that fit in perfectly with his father’s heart; he thanked him and bid him farewell.  Everyone shed tears during the speech. I thought in my heart: Now, from heaven, Róbert Gódány is proud of his son.

Then his children and grandchildren placed the coffin in the grave, and it was immediately covered with dirt, as is customary in the rural areas of Hungary. Meanwhile the participants sang, eight men tossed dirt on the grave… It lasted more or less the same amount of time it takes in Germany when everyone passes the open grave, tossing in dirt or flowers. 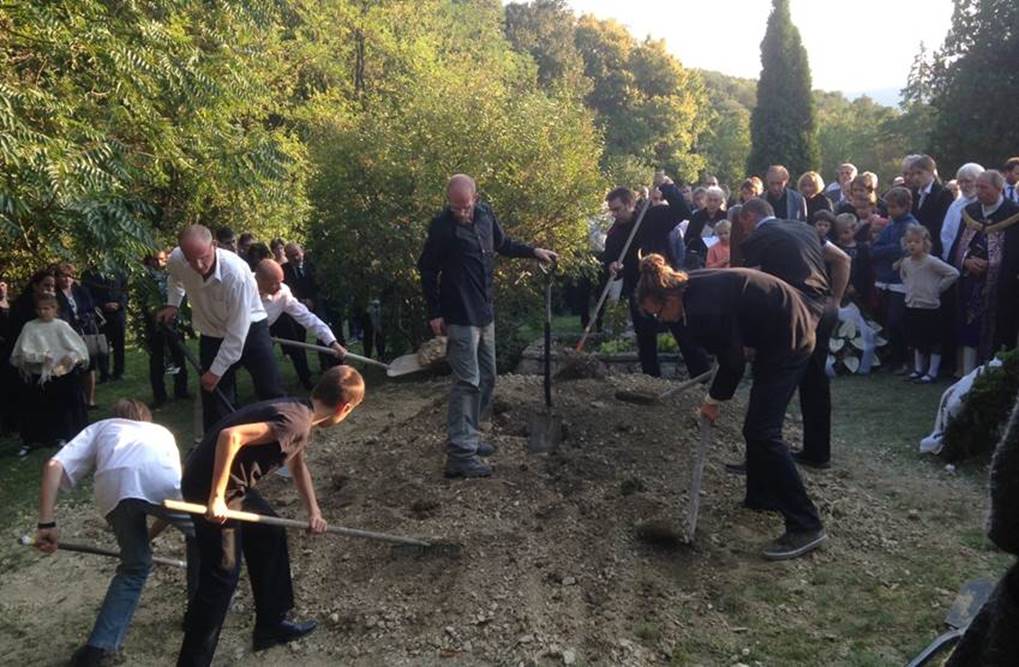 From the builder of eternity

After two and a half hours of celebration, everyone was invited to an agape meal at the Schoenstatt Center, where there was many greetings and time for visiting. Photos of Róbert Gódány’s life were also shown.

Rita Gódány went through the ceremony with incredible strength. The long months of Róbert’s illness gave her the opportunity to bid him farewell and to accept everything from God’s hands. It was noticeable that her soul was at peace. She was the strong and warm center of her family, of her grandchildren, who constantly went to her. She received the condolences with a heart radiating strength and serenity.

During the conversations, that followed the celebration, it was noticeable seeing how those attending were touched.   Many defined it as a “beautiful” and profound ceremony. Everyone felt like a large family.

We built God’s sacred kingdom on holy land, with strong and young hands, like a cathedral.

We were called by a heavenly message with the urgency of stormy times. We should be laborers of the builder of eternity.

He touched our souls with his grace in the dawn of our lives he made us his laborers.

Now with our hands, we build the Queen’s sacred kingdom in Schoenstatt’ holy land, just like a cathedral.