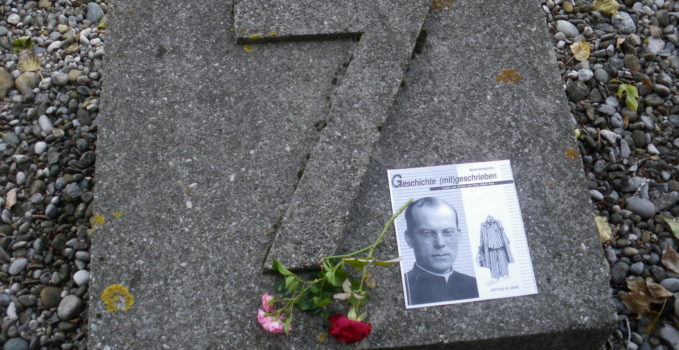 No one can bear being a slave in the long run

On 3 September 2017, the 75th anniversary of Father Albert Eise’s death was celebrated at the Dachau concentration camp memorial as well as in his hometown of Oeffingen. Unfortunately there is no report about the celebration in Oeffingen. The motto was: “Nobody can bear being a slave in the long run” – a statement from Father Albert Eise, who then put this sentence before it: “How beautiful it is to be allowed to think.”

Konrad E. Pflug, born in Oeffing in 1946, has been occupying himself with German history for years. He was responsible for the Department of Memorial Work as a former head of the “Democratic Engagement” department of the Regional Center for Political Education in Baden-Württemberg.  He had essentially prepared the celebration in Oeffingen, but could not then take part in it.

At the celebration in Dachau, there was a thematic tour for the participants, with a stop at Block 7, where Father Eise died in the morning hours on 3 September 1942. Father Fischer, one of the other Schoenstatters in Dachau, was able to secretly visit him a few days before and administered the Sacrament of Anointing for the Sick.  Albert Eise was a pupil in the student home in Vallendar/ Schoenstatt during the establishment of Schoenstatt; he was ordained as a priest in 1925.  In 1931 and during the start of the persecution by the National Socialists, Father Kentenich appointed the young brother as an employee at Schoenstatt. A conference with students of the Schoenstatt Movement in August 1941 sealed Eise’s fate, even though it had already been transferred from Schoenstatt to Koblenz for security reasons. A Gestapo informant had settled into the group, which meant that all cautiousness did not help. The Koblenz Gestapo took him into “protective custody” to the “Karmeliter Street” prison while he was in the chapel of the Barbara monastery in the middle of a lecture.  On 12 November 1941, Eise arrived “on a transport” from Koblenz to the Dachau. After a short period of intensive work for Schoenstatt, Albert Eise fell ill from hunger and died on 3 September 1942, at the age of 46.

Again and again, visitors to the memorial looked at the group in an interesting and questioning way, took photos, including of the Todesangst-Christi chapel, where a pilgrim MTA and pictures of Father Kentenich and Father Eise were placed. The nearly forty participants, mainly from southern Germany two from Romania and a group from Herxheim in the Pfalz, came.

Members of the Schoenstatt Mothers’ Union arranged an hour of worship in the Carmelite monastery of Heiligenblut church. This is also where Holy Mass was celebrated in the afternoon. Guitars and flutes accompanied the songs. For Father Peter Hinsen, SAC, Friedberg, it was, as he said, an honor that he was able to celebrate this memorial service. He was a rector at the Pallotti House in Freising a few years ago. Father Hinsen sent greetings from Provincial Scharler. Father Hinsen was asked what was meant by ‘normal’ and answered with a reference to the fact that one can find a lot on Google, but that we as Christians must form our own opinions and live according to our principles rather than to what the majority defines. Paul admonishes us: Do not be conformed to the world! The two Pallottine fathers, Father Eise and Father Reinisch, are set as examples. Both had gone through Father Kentenich’s school. Father Eise was a teenager on 18 October 1914, during the founding of Schoenstatt in the Original Shrine. He was also a witness to the founding of the Family Work on 16 July 1942, in Dachau. 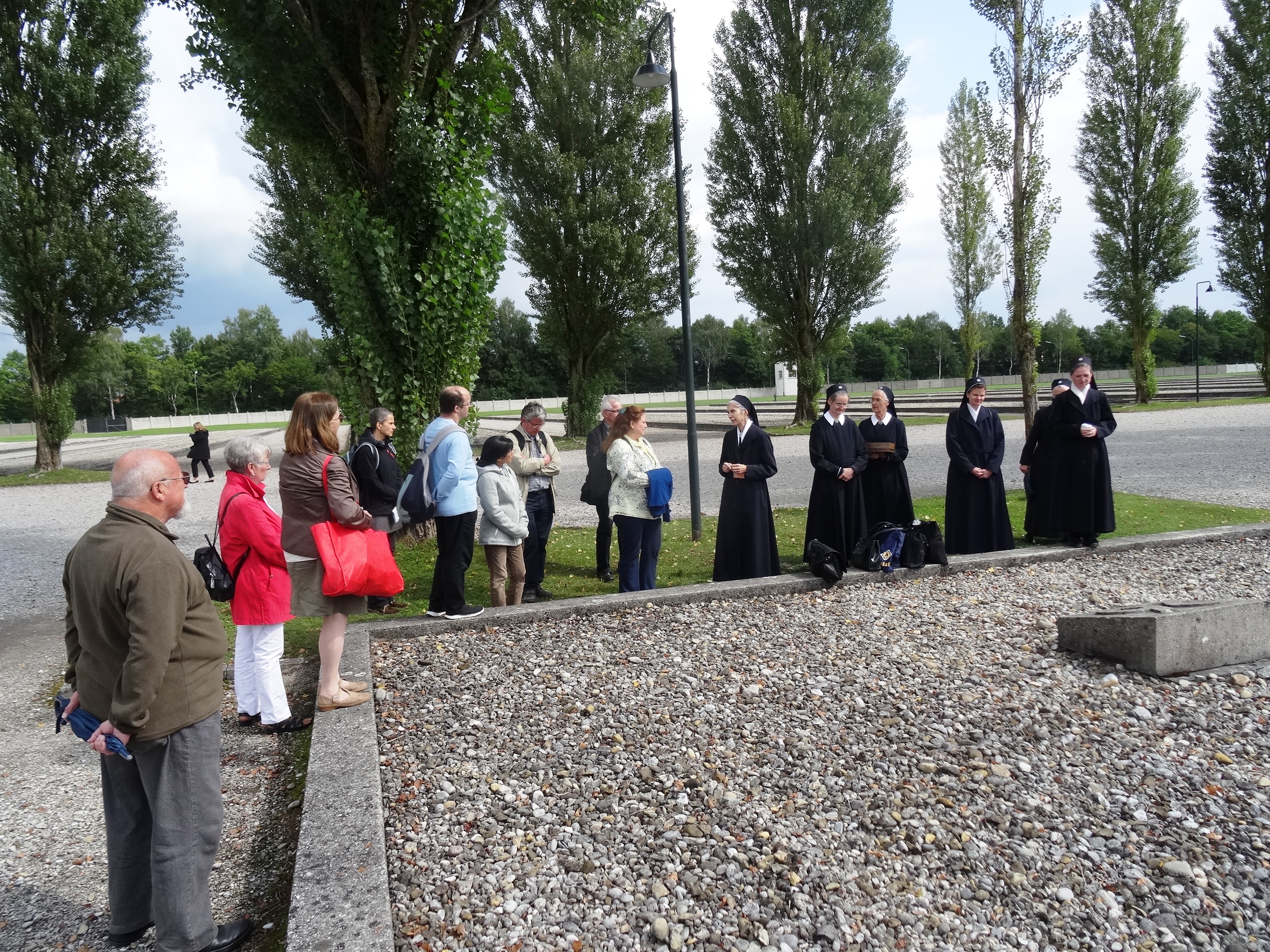 Names instead of Numbers

Throughout the whole time, one could look at the memory book “Names instead of Numbers” in the conversation room of the Evangelical Church of Reconciliation.  There are already several entries about prisoners from the Schoenstatt movement: Karl Leisner, Father Joseph Kentenich, Dr. Fritz Kuehr, Father Henkes SAC, and now Father Albert Eise SAC.  A Freisinger pupil, Maria Gross from Hohenbercha, wrote these pages and presented them at the memorial ceremony for Albert Eise in Oeffingen on 3 September 2017.

The memory book is a steadily growing collection of biographies of former prisoners of Dachau. The authors are honorary project participants.  They go in search of clues and put documents and images together.  They add one puzzle piece to another based on information from different sources, literature on historical events, and memories of survivors or relatives.

After the celebratory Mass for Albert Eise, the exhibition “Names instead of Numbers” was opened in the Christ the King’s Church in Oeffingen on September 3, 2017.   This happened during the commemorative events on the 75th anniversary of Albert Eise’s death.

Maria Gross finished her work on Albert Eise at the Camerloher Gymnasium (High School) in Freising during a seminar for school.  She explained why she, as a Freisinger student, was specifically concerned with this person: “My father is a pastor in Freising.  What would have happened to him, for example, if he had lived and defended his faith in the Nazi era?”  She explains: “Through his death, Albert Eise has inspired many people to advocate their opinions and beliefs, and also to hope in times of darkness.”

Source for this section: www.gedaechtnisbuch.org