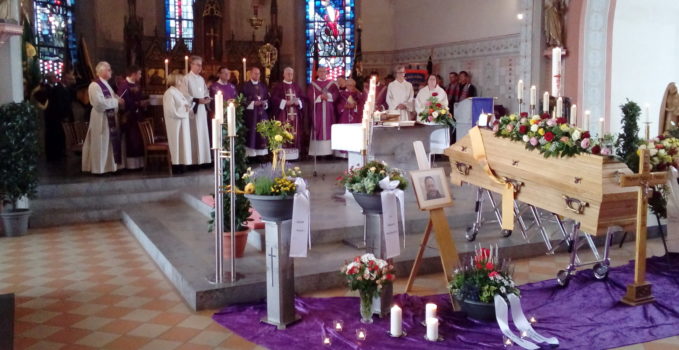 We have to tell about the life of Fr Pablo Pelaez 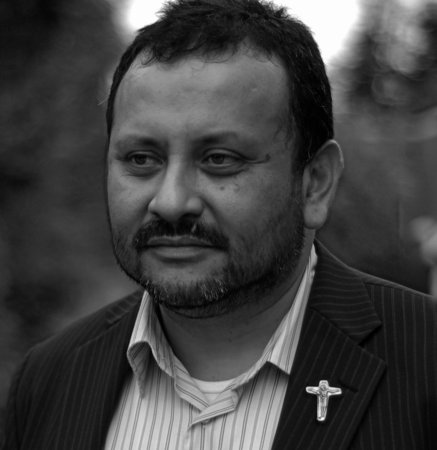 “For fifty, almost fifty-one years, Pablo traversed and explored this earth in the fullest sense of the word. It was a journey with many stopping points, many changes, with many joys and, in the last few years, with a great deal of suffering. All of us here today, and many, many others, met Pablo Enrique Pelaez Ronquillo somewhere, or accompanied him for longer or shorter stretches of the way. We could tell  … and we have to tell …”

At this point of the homily during the funeral of “Padre Pablo”, the packed parish church of St Hubertus in Rennerod, Germany, which had been decorated as though for a solemnity, it seemed as though countless stories were awakened in the hearts of those present. They would have been accounts of encounters with this “Ecuadorian resident of the Westerwald”, who was so beloved by his parishioners that they had moved heaven and earth to attend the Requiem on that 17 June, despite the cool and overcast weather.

He died in the early evening of Trinity Sunday a few minutes after Holy Mass had ended in the shrine of his hometown, Guayaquil in Ecuador. The people there had prayed intensively for him during the time of his illness, and particularly on that day. His sister Carmen “wrote that while she thought so much of her brother, she had sung with all her heart so that he could hear her in Germany, and she had felt particularly close to him,” Fr Egon M. Zillekens related in his homily. He had been asked to talk about Fr Pablo and tell his parish about him. He knew how to express the pain and the encounters of various families with Fr Pablo, and to connect them: His natural family, represented only by his niece, although all were spiritually present; his Schoenstatt Family in Ecuador (the leader of the Movement, Fr Eduardo Auza, had sent a personal message) and in Germany, the family of the Schoenstatt Priests’ Federation, the Spanish parish in Wetzlar, the Ecuadorians in Schoenstatt (who could only be spiritually present), and above all the parish and its associations with whom he had worked, as well as its choir, of which he was a member, and which he had always accompanied throughout his illness.

“I have a great weakness: I immediately feel at home everywhere.” Fr Pablo had spoken those words when we first met him, his confrere, Ulrich Schäfer, recalled. They describe him well. It was a though he “felt at home” with many people. The contact remained, even when there was a long break in communication at times. He was simply part of the family with many people, Fr Zillekens remarked, and many nodded. One or the other had to dry their tears, while other simply let themselves weep. The families did not feel ashamed to express their sadness and gratitude.

Then Fr Zillekens told about the life of this priest from South America. His sister had told him things, and so had his confreres and members of the parish. Above all he related his own experiences, starting with the time he had accompanied him on the way to the priesthood, and his place in Schoenstatt, about his First Holy Mass – cue: his last cigarette – up to his last selfie and his greeting via Whatsapp a few days before he died.  A narrative community.  It has a lot to do with the Theology of the People, and with Joseph Kentenich, who re-discovered the value of narration as a community and identity building force, and made use of it in his foundation. That was decades before communication science established story telling as the gold standard for successful brand communication. Above all it has a lot to do with Jesus, who talked about his Father as no one had done before, and did it so well that his Father became the Father of all who listened to him. Listening. 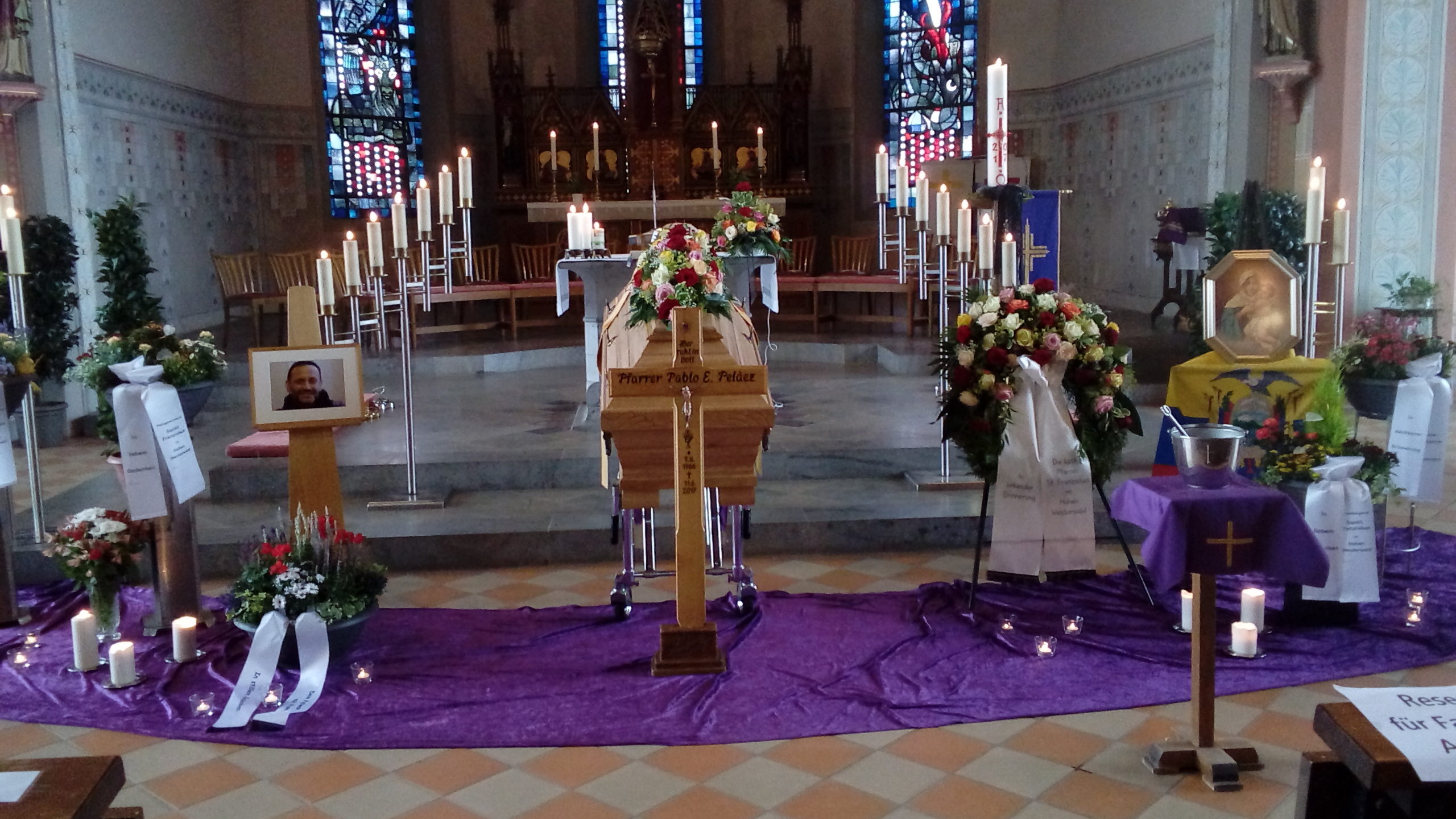 The country I traversed and discovered is breathtakingly beautiful

The country I traversed and discovered is breathtakingly beautiful. This was the motto for his First Holy Mass, which had so much to do with the community of priests were he had found his natural and spiritual home. This is shared with those who take their bearings from Fr Kentenich. In exactly the same way the earthly and heavenly are connected, so Fr Zillekens reached up just once to the heights of theology: “After all their efforts, when the doctors have to say: Exitus, then God says: Introitus.”

Throughout this morning the whole congregation were touched by this Introitus of their Fr Pablo in this land of God. “Pablo gave as a heading to his whole priestly life the saying: The country I traversed and discovered is breathtakingly beautiful.

Today, however, he says to us: the country I am now entering, the heavenly Canaan Patris, is simply wonderful. It is worthwhile directing your life towards it, traversing it, examining it and discovering it.”

For what seemed ages the long procession made its way through Rennerod to the cemetery. “It can’t be more ceremonious for Helmut Kohl”, someone remarked, while pointing to the many priests, banner bearers, altar servers, and the guard of honour. “Perhaps with more ceremony”, came the reply, “but not with more warm-heartedness.”

“Fr Pablo was spiritually very much with us at our Holy Masses”, wrote Fr Eduardo Auza from Ecuador. “Fr Pablo’s love gives us the courage to be generous and to make our contributions to the capital of grace, so that Mary, the Mother of Life, will make our work fruitful, just as she made the love and priesthood of our brother Pablo fruitful. … May the Lord and the MTA bless you all richly, and above all give you the tenacity and joy that were so typical of Fr Pablo’s life. May his sacrifice serve as an example in proclaiming the Gospel to all around us.”

“The funeral was a real feast”, one of his parishioners remarked at the reception that followed. He sounded almost surprised. “Yes, a feast. Padre Pablo would really have enjoyed it”, was the response. Then, “He enjoyed it.”

“If he was and is really with us, it means that he has not left us. Suddenly he is there in a different way, not confined to the here and now.” This is a quotation from the musical “Wagnis und Liebe” – daring and love – about the life of Fr Kentenich. Padre Pablo was truly with us, and all of a sudden that morning “he was there in a different way”. 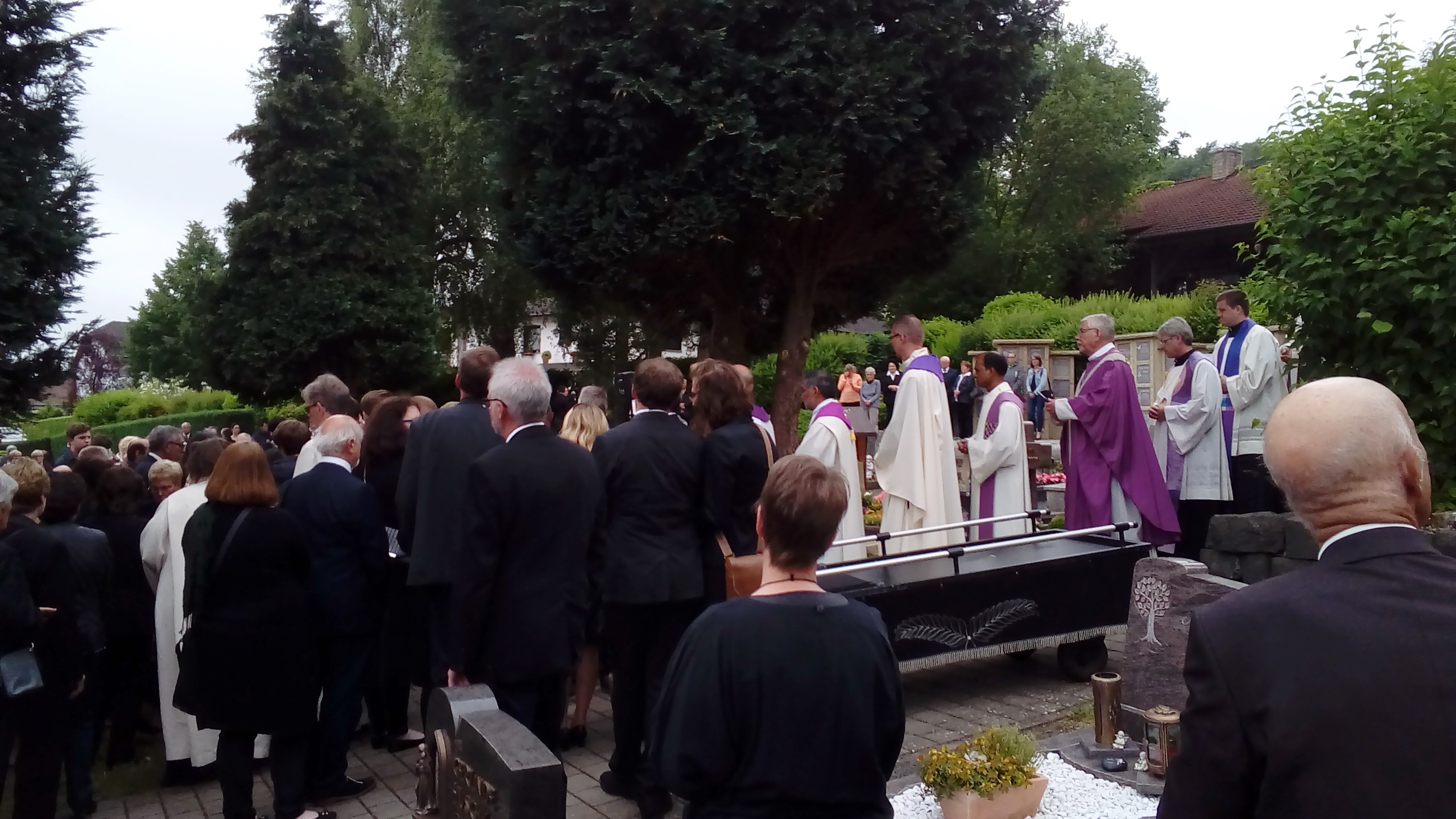