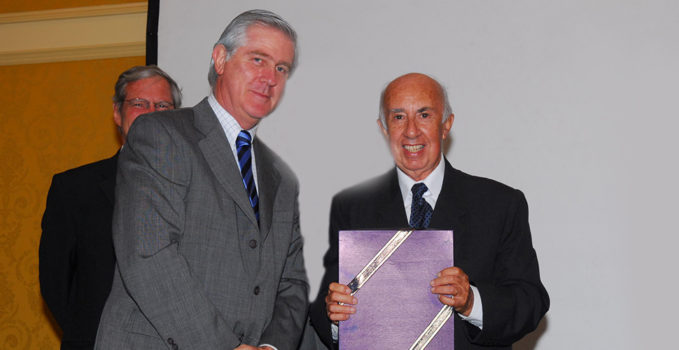 On July 31st, Rodrigo Ossandón died unexpectedly. He was a member of the first Family Federation course in Chile, “Hogares de Fuego” [Homes afire]. He had some problems walking and was undergoing treatment with kinestheologist. He also had fatigue, was hospitalized, and they discovered his heart was not functioning very well, but they sent him home. They were tranquilly watching television; he closed his eyes and then said “Maní” (his wife’s nickname) and went! Father Luis Ramírez gave a beautiful homily that included his first Covenant of Love prayer, so radical, very beautiful.

A Schoenstatter since his youth

Dear Rodrigo, I am so convinced that you went directly to Heaven that during these days I find myself asking you for favors. There was a celebration when you arrived; they were waiting for you with open arms. There was the Triune God, Blessed Mother, your two children, your excellent parents, Father Kentenich, Father Benito, Mario Hiriart, your course brothers and sisters, from your group…a multitude! Your departure was a clear demonstration of this. You were in the clinic waiting for them to release you, you said “Maní”…and you went to sleep.

You had a happy childhood, a very Catholic family, five brothers and sisters, very connected to tennis, and to Zapallar. You were a very good student at the German High School. You studied civil engineering at Catholic University. Hugo Tagle invited you to an encounter for university students in Valparaiso. There you met Schoenstatt, and you were fascinated by Father Kentenich’s thinking, which invited us to change the world, to form a new man, a new culture…he transmitted a living faith in a God of love. You formed the third youth group with Fr. Benito, the Hetairos, with whom you maintained bonds of friendship.

He was a model family father and Christian businessman

A great businessman along with his brother-in-law, Carlos Cuevas, they created a business of metallurgical structures. They constructed many works, especially sheds. Today a son and a nephew handle the business.

Rodrigo was an intelligent man, profound, and a student of our Father and Founder’s original pedagogy. Maní also knew Schoenstatt, entered the third group of girls’ youth, “Magnanimitas,” very committed to the Movement, a great sympathizer and with solid spirituality. They were an exemplary couple; being apostolic, they inspired many. They were Branch Leaders, good educators…they were always present in each initiative. At meetings, they always spoke of their fidelity to praying the Rosary every evening and attending daily Mass. They suffered greatly with the loss of little Rodrigo at the age of two, and years later with the illness and death of Teresita at age 33. She was a little saint. Those were very painful moments, but their faith was unshakeable. We were impressed by their bravery in continuing forward, always working to change the world.

He was good writer with great social discontent, he wrote several books on the Encyclicals that dealt with this topic. He was the driving force for the Union of Christian Businessmen, USEC, which he led for two terms. He created the Business Mission, which had great repercussions in the media and in businesses.

We were very impressed by his human qualities: his friendliness, his humility, and his simplicity. He was a great conversationalist, joyful, interested in all topics, studious, and always restless for reality. A very good father, he was always concerned for each one of his children, always searching for ways to help them, and interested in their problems.

He was part of the first Family Federation Course: “Homes afire”

His passion for tennis was a separate chapter. A great player, many times a champion, he always tried to play until he was no longer able to do so because of his illness. Besides, he infected everyone with his dear sport: his children, his grandchildren, and his friends. So many beautiful memories! We will miss you greatly!

Photo: Rodrigo Ossandón on the right, receiving an award for his work developed in the USEC.