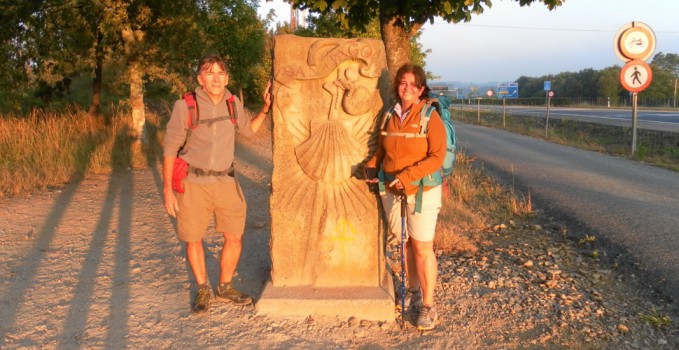 The Camino de Santiago Compostela- the Way of St. James

When I was seriously ill in the hospital, one of the doctors, who cared for me said: “You were born again, 90% of the people, who have the problem you had, do not survive; you have to celebrate another birthday; do whatever is possible, everything that you had planned to do.” I immediately thought about the Camino de Santiago [The Way of St. James], named after the apostle also known as James the Greater or James, son of Zebedee, which ends at Compostela, the capital of the Autonomous Community of Galicia, Spain.

Many years ago, I had thought about making at least a part of the pilgrimage on the Camino. I have a friend, who along with his wife, did the French section of the Camino from St. Jean Pied de Port, which is 780 Km. (484.67 miles). He had related his experience and I thought: “Someday I will also make that pilgrimage.”

A return to life

Last year I had a very serious health problem. I was in the hospital for thirty-four days, twenty-one of which I was in intensive care intubated and sedated. At one point, the doctors had given up hope, and they thought I would not recuperate.

Many prayers were offered within the Schoenstatt Movement, mainly at Ciudad de Este, and also by people who do not belong to the Movement, some who did not even know me. There were many prayers to God and the Blessed Mother. And they worked! I began to recuperate against the prognosis. Little by little, I began to come to life again, and I remember that one night a friend from the Professional Branch brought me the Pilgrim Mother, who remained with me for five days, and it was placed in a strategic place so that I could see her when I went to sleep and when I awoke, the first thing I looked for was her gaze, and the Blessed Mother was there taking care of me. Until one night, they came for her, the person had been told that I had improved and there was another person who needed her more than I. Of course, the explanation did not convince me and I wanted to keep the Blessed Mother, but I thought that if she had been with me for five days, I could not be selfish and I sadly let her go. Two days later on 14 May, the doctor released me.

I recuperated at home and at a physical therapy clinic, and while I was recuperating, the project to make a pilgrimage on the Camino matured. One day I proposed it to Lena, my wife, who accepted without hesitation.

To Madrid- the adventure begins…

Since then we began to do research about the Camino: the different routes, the hostels, footwear, backpacks, what to take in the backpacks, etc., etc. We contacted people, who had made the Way pilgrimage. Fr. José María García put us in contact with Fr. Carlos Padilla from Madrid, who had vast experience about the Camino, and with Fr. Bernardo Parra, novice master in Tupãrenda, whose suggestions and advice were very useful.

In April, we made reservations at hostels where we would stay every day at the end of our walk; what is more, we bought tickets for Madrid.

We were advised to train with loaded backpacks, and we did. Some weekends we chose a specific track and we marked the distance and time, and we did well with that it seemed.

On 5 July, we arrived in Madrid with a temperature of 38°C (100.4° F), and Bárbara and Eduardo were kindly waiting for us. That afternoon we saw the Shrine of Pozuelo de Alarcón, and then we went to Mass at the Serrano Shrine. To our surprise, the celebrant was Fr. José María. After Mass, we conversed for a while with him and with other Federation couples, who were introduced to us. This is how we ended our first day in Madrid. 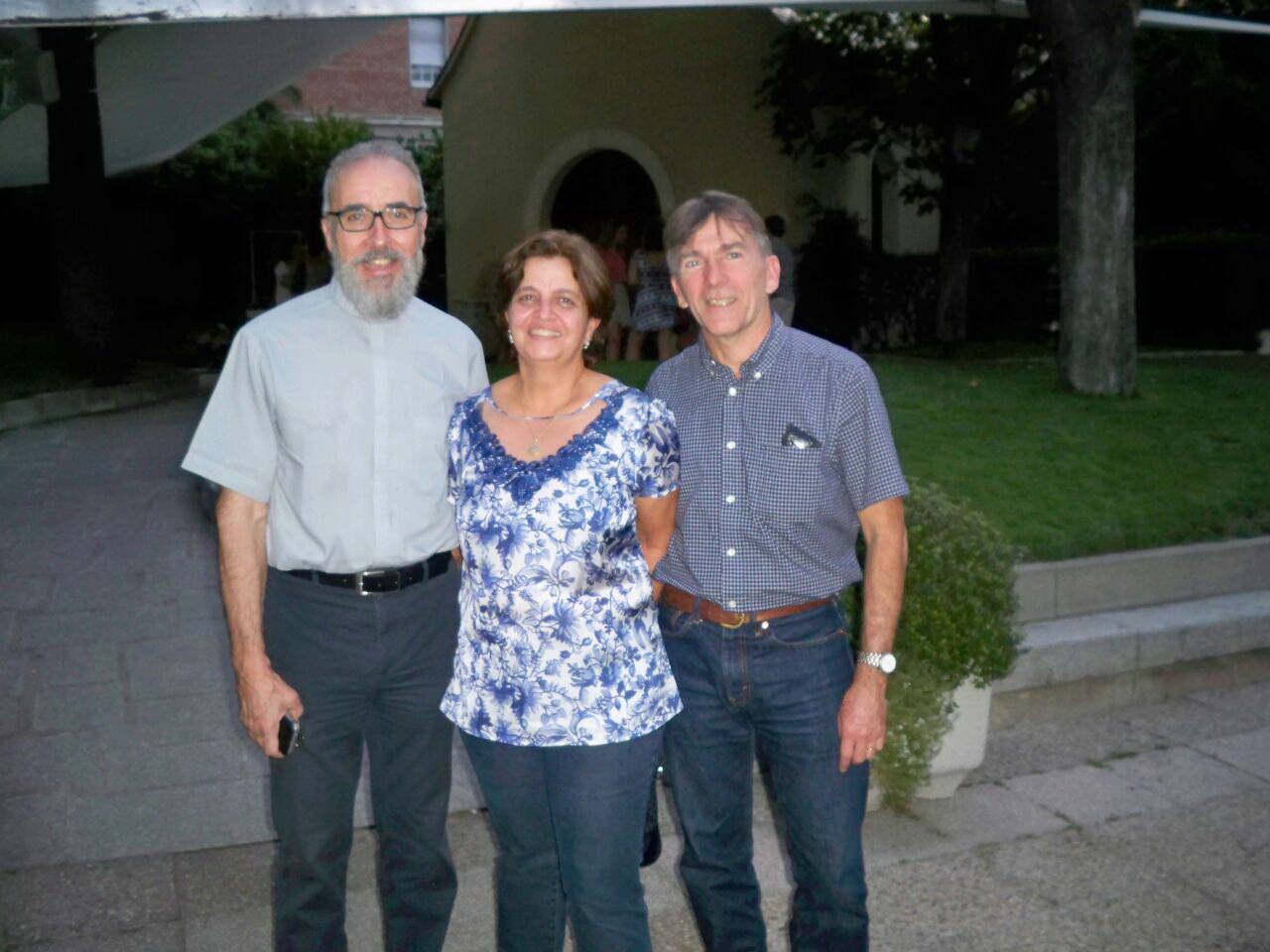 In Madrid, at the Serrano Shrine, with Fr. José María

Setting out on the Camino

The morning of 7 July, we took the train that would take us to Sarria, in the province of Lugo, the place where we would begin our pilgrimage. After a six-hour trip, we arrived at our destination, and then we found our hostel. We went sightseeing in the city, the main street, a small seafront and the Church. We found that the city was filled with pilgrims, some were beginning the Camino from here like us, and others continuing on their pilgrimage.

The following day, 8 July, after a refreshing rest, we began our pilgrimage at approximately 7:30 a.m. and as we walked at first crossing the city, and then leaving the city, we met many pilgrims of all ages, and different nationalities, some walked alone, others in couples, and others in large groups, such as a group of catechism boys or another one of scouts.

Upon completing one stage, we went to the hostel, we rested a little, we had lunch and then we went sightseeing in the town; we checked the schedule for the pilgrims’ Mass, which was usually at 7:30 p.m.

That is how our six walks of (115 Km or 71.4577 miles) went, crossing forests, cultivated fields, small towns, dairy farms where cows were milked, tasting meals from the region and at the end of each stretch, we participated in the Eucharist of the pilgrims’ Mass.

We arrived in Santiago de Compostela at noon on 13 July; we were happy and pleased, but above all, we were very grateful for the gift of making the Camino in a serene way, without any problems and with wonderful weather; we were able to meditate, to pray and to express gratitude. That afternoon/night we attended the pilgrims’ Mass in the Cathedral of Santiago, which was constructed from 1075-1211. That is how our day ended, but the best was reserved for the next day. 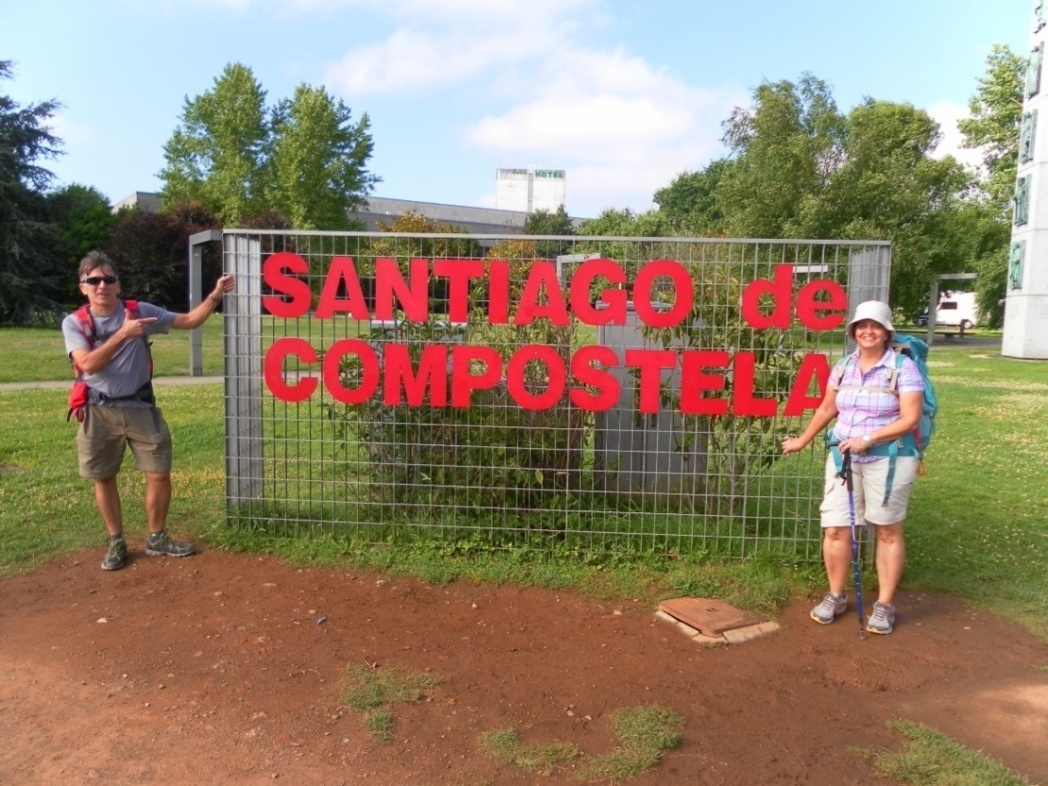 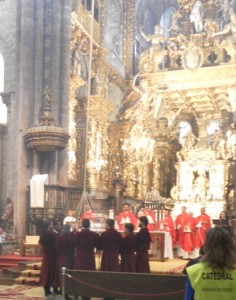 On the 14th, we went sightseeing around the Cathedral and then we went inside, since we wanted to see it in more detail, and to our surprise, it was full, all the pews were taken. Some pilgrims were still carrying their backpacks, and upon inquiring, we found out that after the noon Mass there would be a ceremony with the “censer”, an enormous thurible (or censer) in the Compostela Cathedral hanging from the ceiling that is swung by eight people in a high arc up to the ceiling filling the entire sanctuary with incense, accompanied by chords played on two enormous organs. It was quite a treat.

Early the following day, we went to the station to take the train for the return to Madrid. Needless to say, 90% of the passengers were pilgrims, and during the trip, we made plans to return once again to the Camino, perhaps doing a longer stretch or from another of the many routes leading to Santiago, because the Camino captivates, St. James invites.

All we can say with jubilant admiration is:

“Thank you Lord, thank you Blessed Mother, for your kindness.”