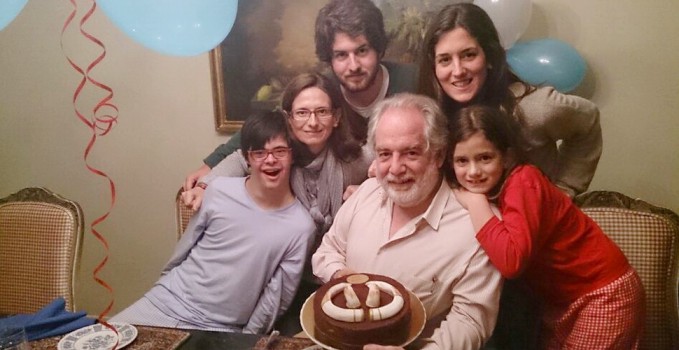 When I was in school, at the age of twelve or thirteen, we had a Spiritual Director, who was very special; Fr. Xavier Ilundain was a Jesuit priest, who “rewarded” our behavior at school by “allowing” us to go to a place called Club Avance on Sunday afternoons. Club Avance is a shadow organization of Fe y Luz [Faith and Light] where he was a counselor. He tried to give the lads a wholesome afternoon of leisure, as the mentally handicapped were called and to the “normal” ones, as we continue to call ourselves; we shared a time of celebration, of joy and friendship. At that time I had no idea of what Fe y Luz was or who had founded it. Many times I went more because of the girls who went, who because of their age always aspired for more, not just one but all of them. I went to this club for about five years. None of those girls, who later grew up and became adolescents, became something more, but during those years, Mary, the Blessed Mother, was already working on my heart for what would await me.

Years later, I began to date my wife. Paradox of fate, she also went to Club Avance, although we were not there at the same time. The Blessed Mother again worked on my heart and that of Lourdes, my wife, so that “something” would happen between us. And it was always something to do with Club Avance.

Shortly after dating, we began to go together on the pilgrimage of the sick to the Shrine of Our Lady of Lourdes in France with the Hospitalidad Diocesana Nª Sra. de Lourdes de la Archidiócesis de Madrid [Our Lady of Lourdes Diocesan Hospitality of Madrid]. This was some time ago, although I have missed some years. In a couple of days, I will go to Lourdes again with the Hospitalidad, and I will be recognized for “25 years of attending the pilgrimages.”

Coincidences of life, or rather, “Godincidences,” my wife, as I mentioned before, is named Lourdes and Fe y Luz [Faith and Light] was created in Lourdes in 1971.

During the first years of our pilgrimages to Lourdes, my then girlfriend and I were on the team that took care of mothers and their ill children many of them were mentally handicapped, in addition to many other illnesses. We began to deal with these people in a different way than during the celebration on a Sunday afternoon. We began to live with them. The Blessed Mother continued to work.

We married; we had a precious daughter Isabel first. Then we had a fantastic boy, Manuel. Suddenly my wife asked me, “Why not adopt a boy with Down’s syndrome?” I was shocked. Interiorly I rebelled at the idea of “mortgaging” my life in this way, but something interiorly in me prevented me from saying no. I did not say no, but I didn’t say yes either. And with the patience of a woman, time passed and every several months she would remind me about it. My attitude and response were always the same, until one day she told me that she had turned in the application to adopt a boy with Down’s syndrome, and that we would have our first information interview in a few days. I was “knocked out,” but again, the “no” was still unspoken.

We told our families on December 28, 1995, the Feast of the Holy Innocents, take the “Godincidence” again and nine months later Javier entered our home. Since then the Blessed Mother by Javier’s hand has continued to educate us and to take care of us and above all, to teach us how to live on an equal basis with a person, as Fr. Xavier said, with the extra gene, gene 21 must be full of love and affection. Ten years later our fourth child, Blanca, was born.

But we, as much as we were discovering in all of this, were not the first in the least to do it. In 1964, the year I was born, another “Godincidence,” Jean Vanier, first, a sailor, then a professor of philosophy, made the decision that would change his life after visiting an “insane asylum” as they were called in those days, and upon seeing the conditions in which the residents lived, he decided to take two mentally handicapped residents to live with him: Philippe and Raphael. This decision not only changed his life and that of Philippe and Raphael, but that of thousands of people divided into 147 communities in thirty-five countries that have grown over fifty-one years. They are the ARCA [ARK] communities. These small heavens on earth in which the differences among the people only add, they do not subtract and where everyone is valued for whom he/she is, a human being. They are homes where they live with their brothers and sisters. They are beacons that illuminate today’s world, where the truth of each person is not in their effectiveness, but instead in their dignity as a Child of God. In 1971 Jean Vanier founded the communities of Fe y Luz [Faith and Light].

The ARCA Foundation of Madrid

And one of these communities is still in a very beginning stage here in Madrid. Approximately six years ago, a Schoenstatter, Araceli Moreno, invited us to her home for dinner to propose this project and Fr. Xavier Ilundain among others was one (I will no longer say Godincidence, but…). Thirty-five years later we met again and for a common purpose– the mentally handicapped. But it is not just any purpose. Project Arca, the ARCA Foundation of Madrid, is seeking a living space, a home, where everyone whatever their mental health, can live together just as they are. Blonde or brunette, one gene more or less, tall or short, good-looking or ugly, dumb or smart, the only thing he/she should do is to enrich the relationship and to share more. To see it another way is to diminish the vision that I have of others to diminish Christ in others by cutting him out.

I am involved in this. Thanks to the work of Divine Providence in my life, thanks to the Blessed Mother, who has taken care of me since I was young, thanks to the open doors– the cracks that God placed on the road and to the people who pushed me if I did not dare to enter– we are seeking a house in order to open a HOME, where we can relate with one another, where we can live as a family, a community (in the ARCA communities, volunteers and handicapped people live together) in a space of freedom, “of Freedom”, respecting each other’s uniqueness, mutually enriching one another, playing with Christ and being taken by the hand, because if there is one thing that my son Javier has taught me over these nineteen years, it is that Christ is reflected in his face in a much clearer way than any other and that he is always holding the Blessed Mother’s hand.