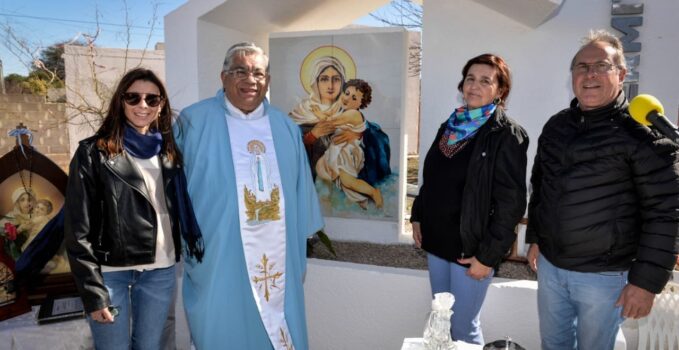 A new wayside shrine in Hernando

On the afternoon of Monday, August 15th at 3:00 p.m., the Mass and inauguration of the wayside shrine of the Blessed Mother of Schoenstatt took place in Barrio Alberdi (at the crossways of Entre Rios and Soldado Giraudo) in the city of Hernando, Province of Cordoba. The wayside shrine has a beautiful mosaic of the Mother Thrice Admirable of Schoenstatt, made by local artists. — 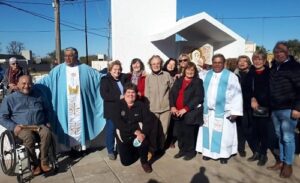 The mayor of Hernando, Gustavo Bottasso, other officials, members of the Schoenstatt Movement and of St. Joseph’s Parish, along with their pastor, participated.

The wayside shrine, called “Mother of the Family”, was previously located in the Illia neighborhood and the parish community, the group of Missionaries and the Municipality decided to relocate it to the Alberdi neighborhood.

The Virgin welcomes us from both sides

During the ceremony, gifts were given to the plastic artists Alicia Losano and María Itatí Cerino, who painted the image of the Virgin on both sides of the construction: on one side with ceramics and on the other side with the mosaic technique.

Architect Guillermo Casaux built the wayside shrine. The design shows a door and home image, has a small roof under which the image of the Virgin is located and is surrounded by flower beds. At one end the phrase “Nothing without you, nothing without us” was placed in metallic letters and at the other end there is a plaque reminding of the blessing event. The public space of the neighborhood chosen for the implementation consists of the outdoor area surrounding the houses and a recreational area.

At the end of the day, those present were invited to enjoy some chocolate and cakes.