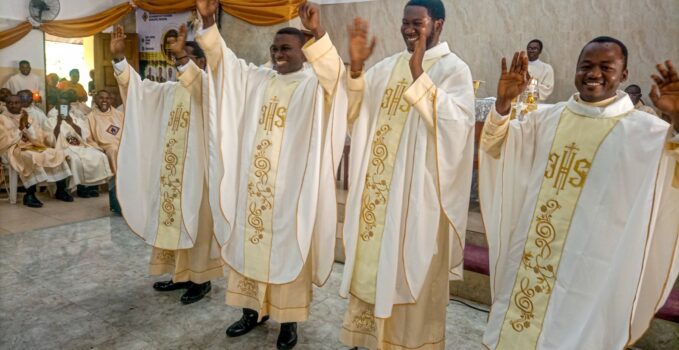 Over a long time, we did not hear from Schoenstatt in Nigeria… But now, on Twitter, there were photos and a story at CEONews, and it is about the priestly ordination of four Schoenstatt Fathers on Saturday, 26th June 2022. —

The ordination had Archbishop Fortunatus Nwachukwu, who also doubles as the permanent Observer of the Holy See to the to the United Nations Office and specialized Institutions in Geneva as the ordaining Prelate.

In his Homily, urged the newly ordained priests of the Secular Institute of Schoenstatt Fathers to be good shepherds as Jesus has called us. The archbishop expressed his joy to everyone as he affirmed that it is indeed a day that the Lord has made for all to rejoice and be glad. 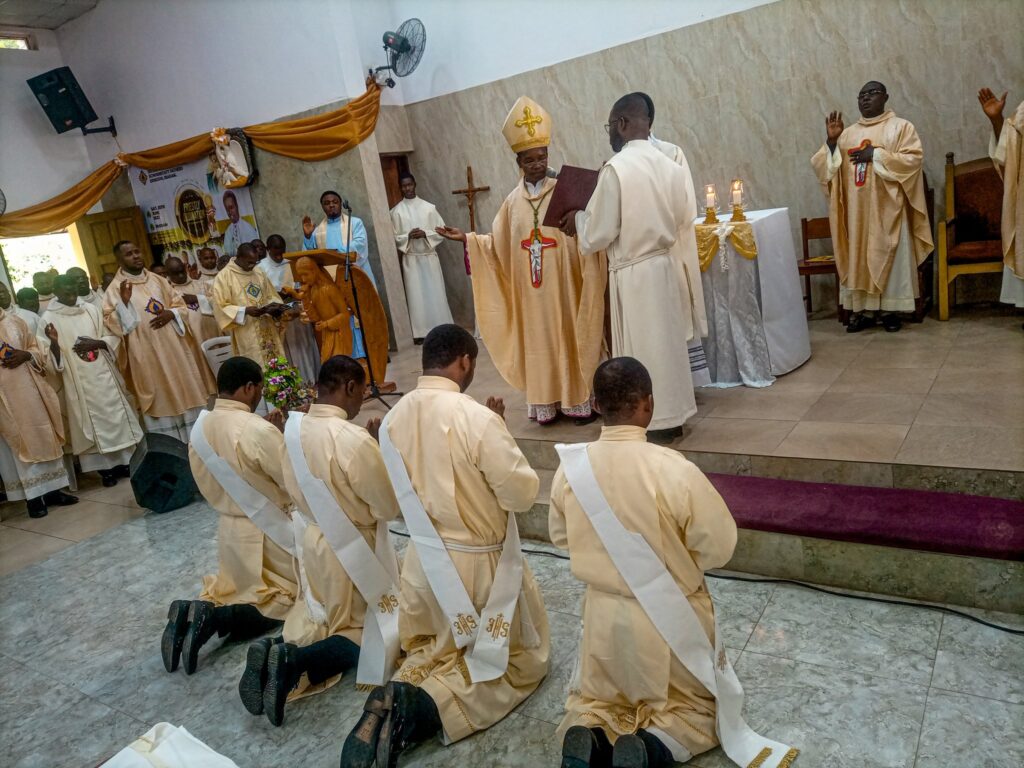 Peter 2:9, the archbishop said, reminds us that we are all Christians, a royal priesthood. So, every Christian, since you are participating in the life of Christ, you are a priest and since it is royal, you are a king. I think every Christian should be proud of this. That is the high dignity of every Christian.”

The Missionary and the Pastoral Mandate 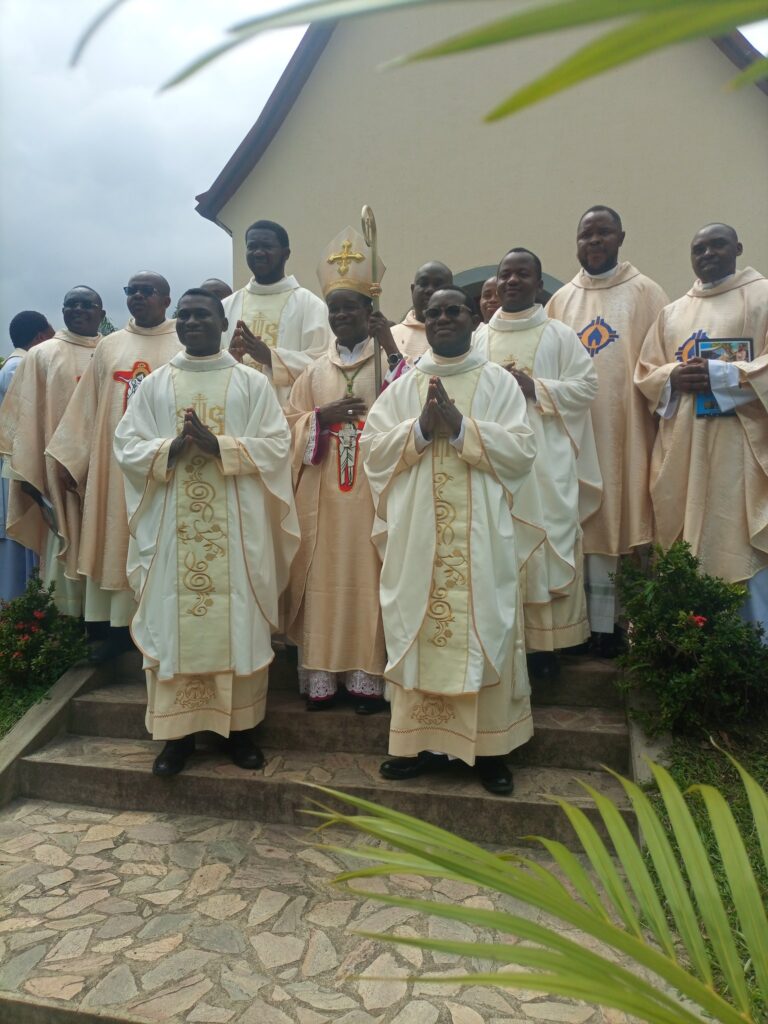 The Archbishop explained further from the old tradition of priesthood of Melchizedek.

“Melchizedek had no father and mother and no trace of any human genealogy, therefore, among the people of God and in the Church, it is very important to learn the lesson of not giving treatment based on where priests come from.”

Explaining about the concept of a priest, he revered the powerful models and engaged fruitfully in the word Pontiff from the Latin root meaning Bridge Builder.

He said, “A Priest is somebody who sacrifices by building a bridge between humans and the divine.”

At the root of his homily, he asserted that there are two cardinal mandates that make and guide a priest: “the Missionary Mandate to go out to the world and win souls for God and the Pastoral Mandate to cooperate and work in unison and obedience with the authority and Bishops of the Church.

On the present state of politics and current developments in Nigeria, the Archbishop lent his voice for transparency of the voters’ registration, education and sensitization of the people to choose and elect people from the perspectives of competency, capacity and track record rather than any sentiments of religion or region or tribe.

He said, democracy makes no sense if it is reserved to elected group of people who go there and decide on behalf of others selfishly’.

He added that violence does not favor anyone and the question of insecurity is a collective role of all Nigerians.
Archbishop Fortunatus Nwachukwu concluded his Homily advising the new Priests that the Staff of the Shepherd is not only designed to be used as a weapon to reprimand the erring followers, but also to be used ultimately, with the hook, to draw the people of God from their errors and sins and guide them closer to God.

The event which was a stunning and beautiful atmosphere and exciting mood was well attended from far and wide, and different walks of life by families and friends of Schoenstatt Community. 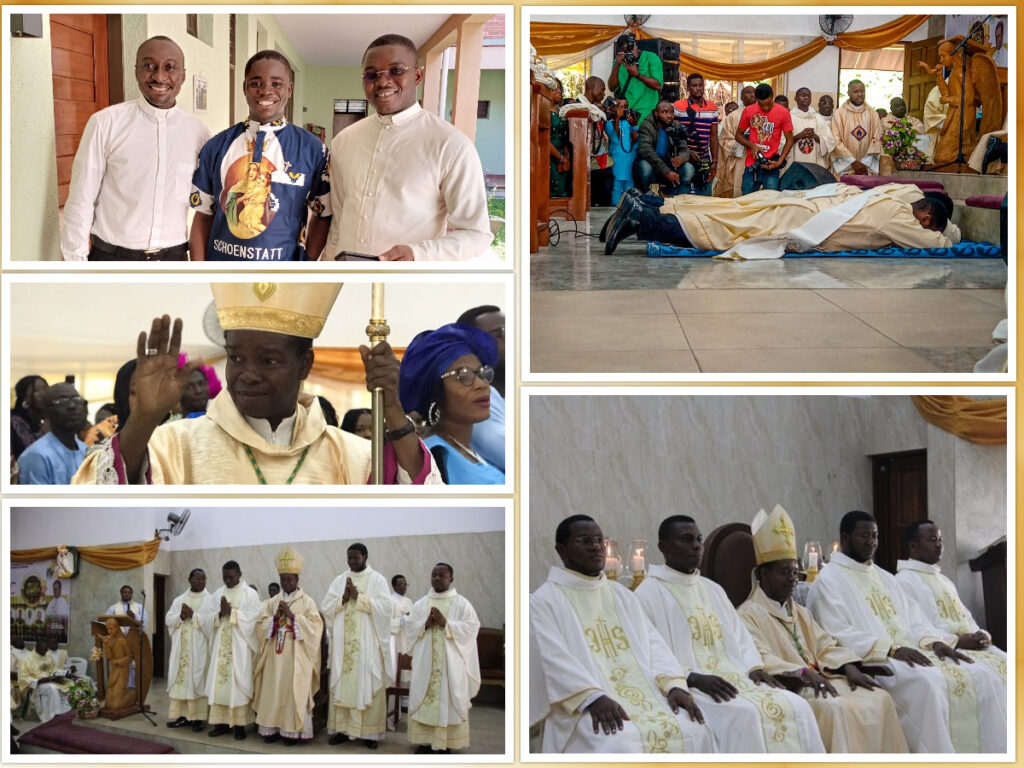