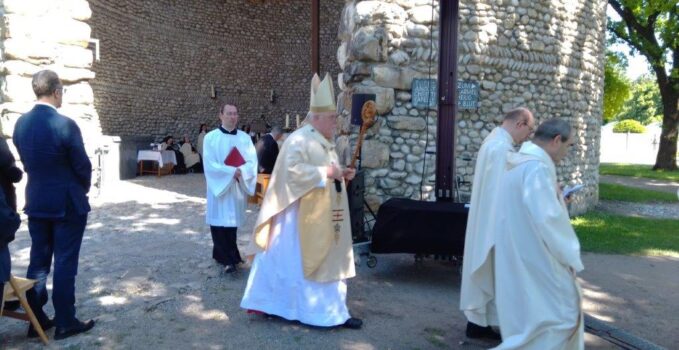 At a church service on the grounds of the Dachau concentration camp memorial site on Sunday, June 12, Cardinal Reinhard Marx emphasized the importance of remembrance and commemoration. In his sermon in the Todesangst-Christi-Kapelle, the Archbishop of Munich and Freising emphasized: “Such a day of remembrance is not only important historically, but also to learn something about our world and to learn something about our faith. That’s Dachau: a place to reassure ourselves about the journey we are on, as human beings and as believing Christians.” —

The service took place on the occasion of the diocesan day of remembrance of the blessed martyrs of Dachau. For 40 of the 57 beatified martyrs who were imprisoned in the Dachau concentration camp and died there, 2022 marks the 80th anniversary of their deaths. Among them is Blessed Gerhard Hirschfelder, who belonged to the first group of Schoenstatt priests in the Dachau concentration camp. A fellow prisoner, Fr. Engelbert Rehling OMI reports: “Chaplain Hirschfelder lived with me in Block 26/3. He made an extremely modest, almost shy impression on those around him, exercised a noble reserve and at the same time was ready to perform any service of love. I got to know him a little better through Father Fischer, who had contacted Hirschfelder and talked to him about the Schoenstatt Movement. Hirschfelder became interested in this community and came to know and love the ‘Mother Thrice Admirable.'” Schoenstatt priests Karl Leisner and Alois Andritzki are also among the Dachau prisoners beatified. 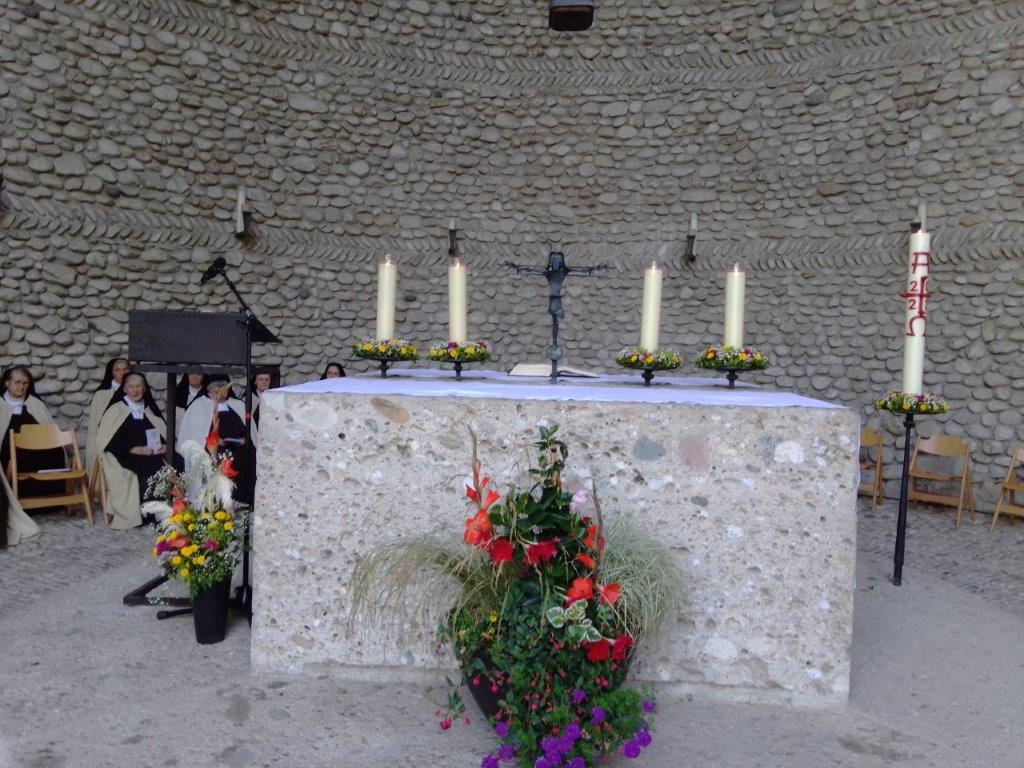 The suffering God who enters the world with his whole existence

“Such a place and the testimony of the martyrs of Dachau are important for today’s society, for our togetherness,” Cardinal Marx said. It is important, he said, “not to make Dachau a museum-like place of remembrance, but a place where it is understood, understood, where we are led into the truth.”

Many times after World War II, he said, people asked whether it was still possible to pray at all, to speak of God at all. “Yes, one must – but differently,” the archbishop said. What must be addressed is “not the almighty God – but the suffering God, the living God, the God who has become our brother, the God who does not leave us alone, who goes with us in life and death, passionate, loving, close, a God who is with us in spite of everything and in everything, even in the night of hell.” An idea of God that does not take into account the suffering of human beings is “worth nothing,” Cardinal Marx emphasized: “God enters the world with his whole existence, and he will heal this whole world with its sufferings, with its wounds, bring it to an end, take it into himself.”

The service was musically arranged by the Munich Cathedral Music under the direction of Cathedral Music Director Lucia Hilz. The “Dachau Mass” by former prisoner and Benedictine priest Gregor Schwake OSB (1892-1967) was heard. The Benedictine composed this mass in 1944 in the Dachau concentration camp, where it was also secretly premiered in the same year. A text by Titus Brandsma (1881-1942) was also recited during the service. The Dutch religious priest, journalist and professor of philosophy was canonized in Rome on May 15, 2022, as the first of the Blessed Martyrs of Dachau.

“Nice were small encounters, for example, in the church forecourt of the Carmel. Drinks and snacks were offered there. This is how the former director of the Dachau Forum/KEB (Catholic adult education) approached me, through whom valuable contacts for cooperation in Dachau arose for us at the World Youth Day 2005,” reported Sister M. Elinor Grimm (Schoenstatt Sister of Mary, advisor to the Dachau Concentration Camp Memorial). “Mr. Schmidinger, retired pastoral worker, was also there. An older “White Father”, formerly in Burundi, had approached my fellow Sisters from Munich. Now I got into conversation with him and two confreres, students from Africa, future novice masters. They were grateful that I was able to show them and explain many things in the memorial. It was, so to speak, a small thank you on my part for the help of the White Fathers for the Sisters of Mary in Burundi. So it was a hopeful, blessed Trinity Sunday!”

Memorial Day for the Blessed Martyrs of Dachau

Memorial Day for the Blessed Martyrs of Dachau has been celebrated in the Archdiocese of Munich and Freising on June 12 since 2017, on the initiative of Cardinal Reinhard Marx. On the previous day, Sister Maria Felicitas Ellmerer from Grafing in Upper Bavaria was remembered in Poland in a special way this year: she was beatified in the cathedral of Wrocław, formerly Wroclaw. Sr. Maria Felicitas, born in Grafing in 1889 and baptized Anna, joined the Congregation of the Sisters of St. Elizabeth in 1911 and was shot by Soviet Red Army soldiers in Neisse, now Nysa, Poland, on March 24, 1945, while protecting herself and other women from imminent rape. 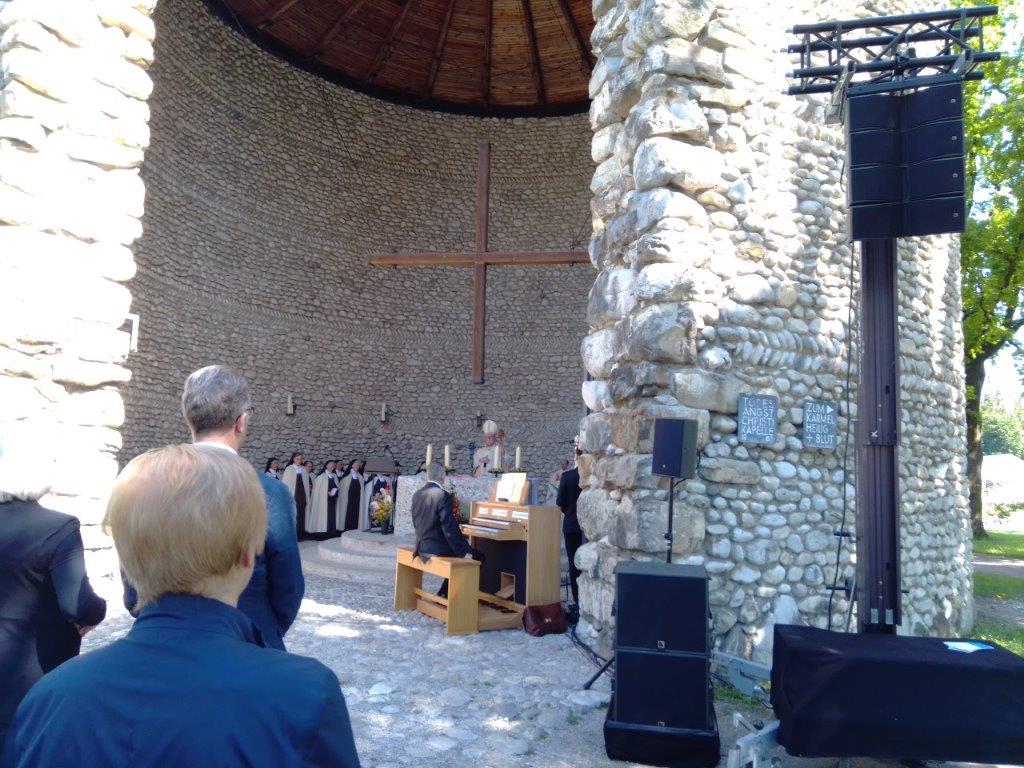