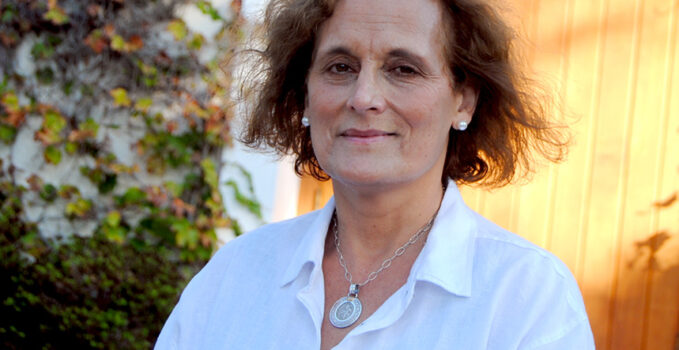 Verónica Ciudad Pap, a midwife by profession, married with two children and two grandchildren, comes from the Schoenstatt Family of Agua Santa and from now on she will coordinate the advisers of the Schoenstatt Mothers’ League throughout Chile, a position that until now was only held by the Sisters of Mary. In this interview, she says that this change will set a precedent in the Movement, she talks to us about her challenges, her struggle against lupus, the situation of women in the Church, and the Branch’s view of the accusations against Father Kentenich. —

“To inspire. That is my function, my task,” says Verónica Ciudad Pap about the tasks she took on when she was elected national advisor of the Mothers’ League. She is to coordinate the work of the advisers in the country, most of whom are Sisters of Mary, along with some lay people, and to direct the work in each place where Schoenstatt is in Chile. According to her, her nomination was the idea of Sister María Jesús Viada, who oversees the Movement in the Provincial Council of the Schoenstatt Sisters of Mary in Chile. The proposal was approved by the sisters and the movement director. “They were all happy, they all accepted. It was, as far as I know, incredibly open and very welcoming,” says Verónica Ciudad Pap.

She is a midwife, married to Joel Pérez, mother of Alejandra and Guillermo and grandmother of two grandchildren. In fact, her children were the first to join the movement. “I saw my daughter making a ‘capital of grace’ with little lenses, and I thought: What a funny club this is!”

No matter how funny it was, she joined Schoenstatt in 2003, and she liked it from the first minute. “For me, there is a before and after, because I personally have no church background.” She explains that her family is not religious; although she was baptized, it was solely her personal decision to receive First Communion and Confirmation. “It was a way that God chose me at different stages of my life and gave me the assurance that I would be able to handle the health issues that came my way.”

In the Mothers’ League of Agua Santa, she sealed the Covenant of Love, made the membership consecration. She became leader of the branch and collaborated in the pastoral of the Shrine.

She clarifies that her appointment as national adviser was not sudden. Some time ago, she was invited to attend a course for leaders in the Movement, and when she finished it, she was asked to advise the branches in Copiapó and Vallenar and to collaborate in the preparation of the annual material during the summer. Also, in places like Chillán, Arica and the Maule region, lay people have taken on the task of serving as advisors, which used to be the exclusive domain of the Sisters of Mary.

In your opinion, what is the greatest challenge for the Schoenstatt Women’s Movement today? 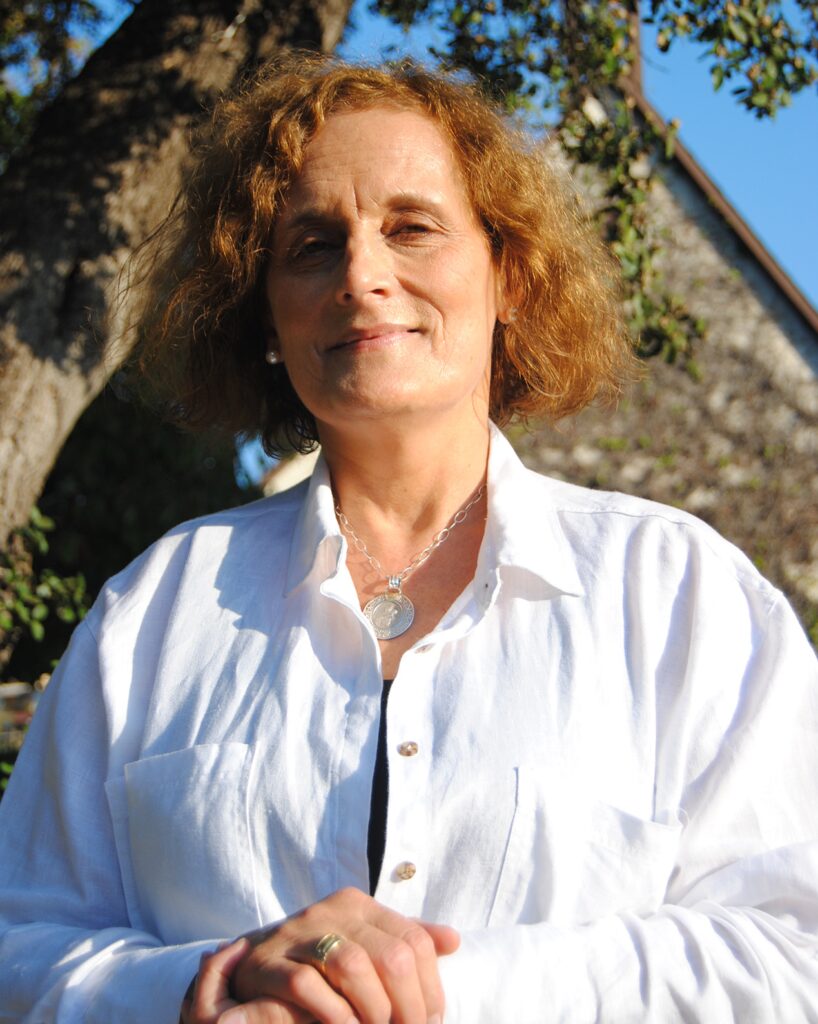 Verónica Ciudad Pap: “We have a severe problem in the Schoenstatt Mothers’ League because the Branch is very old and there are no more young people coming. We need to look for ways to welcome other life situations, not only women who are ecclesiastically and civilly married, as we have done until now, but we are more open to remarried women, because these are the people who need us the most, who have wounds, who perhaps have been terribly discriminated against by the Church, and I believe that with our Covenant of Love we can give a wonderful response.

In fact, we have many experiences. In our branch, there are many women who are in this situation, who have gone through separation, divorce, and new partnership as members of the Movement, or who have come into the branch under these conditions. And we have done some excellent work. This year we’re also going to have a separate workshop for them on how to heal wounds that such experiences bring, and to give them concrete accompaniment.”

Veronica adds that the other big challenge is to create a stronger connection between the Schoenstatt Mothers and the rest of the Catholic Church, which is often perceived as foreign. “I think that the branch, which is so diverse, active and motivated, can make a wonderful contribution of women in the Church.”

Verónica is the pastoral coordinator of the parish of Santa María de los Ángeles in Reñaca (“I resigned today, and they turned me down,” she confesses) and is also involved in education in the Diocese of Valparaíso. During the pandemic, she provided spiritual assistance by phone to all those who called (“they still call,” she adds). As if that were not enough, she also helps mentor parish secretaries, so they feel part of the church and not just functionaries.

On women, feminism, and the church

The new national advisor has also made it her mission to help women go deeper and argue better about social issues. For example, she has already planned a series on gender theory with Cecilia Sturla, an Argentine Schoenstatt scholar.

What do you think about feminism and the role of women in society?

– Feminism has been especially important because it has allowed women to be involved in the areas of work, in the social, cultural, and political field.

She explains that this idea is very present among the younger members, although “older people who are in the branch still use the system where the husband tells them “I’ll help you do the dishes”, “I’ll help you take out the garbage” (…). But there is a whole new wave of people who think differently and believe that women need to be part of society, and I am absolutely convinced of that. But we must do it without losing our femininity and know that there is always a complement, whether we are married, whether we have a partner or not, but there is a complement, both professionally, socially, culturally, because everyone can contribute the best of themselves from their own being.

Based on your extensive work in parishes and dioceses, how do you see the development of women in the Church?

– The Church has opened up to the possibility of having more women in more important positions, and Pope Francis has already done this explicitly, but I think there is still a long way to go, and the Church is reacting very slowly. Terrible! I think they have opened up, but to consecrated women, as if they are afraid that the laity will be included, and I think that Schoenstatt is always one step ahead in this regard.

That is why I accepted this challenge, because I believe that this is a precedent for the future, and they are also thinking about doing this in the family branch. Because we must be open to reality, we must live and give an answer to reality, to what we are living at this moment, and I think that in Schoenstatt we have many answers. I think that we lay people must take the step.

You just alluded to the nature of women. We know that Father Kentenich dedicated a large part of his pedagogy to this subject. How have you as a Branch experienced the accusations against the Founder that specifically concern women?

– We are all waiting for answers, even very much! But we have taken the attitude that if he has committed abuses, we need to change the procedures, we need to change many things within the Movement so that we can rectify all these problems and see the Founder in a different way and not the way we have idolized him until now. I personally have always been extremely critical of that. And I communicated that to the Council of Advisors as well. Because when I came to the Movement, most of the time I did not know if they were talking about Father Kentenich or God the Father. And that shocked me at first, and I said it often. That changed the pedagogical process a lot. And the mothers accepted it in this way: that perhaps he made mistakes, that he was a human being, that he did something that at that time was not considered with the standards of today, but: he changed my life, I am a different person, Schoenstatt is great. The charism he gave me is beautiful. We must wait and see, and I will not close my mind to the fact that he could have been guilty and that he is a saint or not a saint.

Your personal history has not been easy. How do you evaluate this task in the context of your life?

– I have lupus and I used to have crises. Profoundly serious crises. Three times in intensive care on the verge of death and so on. They even gave up on me and told me I would die by the age of forty at the latest. I was diagnosed with lupus when I was 27 years old, and I got my first hip replacements when I was 35 years old because my bones were severely affected, I got vascular necrosis. I changed prostheses, three times on the right, twice on the left, I also have necrosis in one shoulder. But the truth is that Schoenstatt changed me, I let the Blessed Mother guide me, and I did everything I wanted in my life. I never thought I would be able to have grandchildren…. To have them, yes, but not to see them or enjoy them. I asked God to give me some time for the children to grow older, to be a little more formed, to have the image of their mother. But I never thought I would get this far and even less that I would be so happy and working in what I do. I have the support of my family, which is particularly important. My husband accompanies me in everything, he helps me, he motivates me, and so do my children. My children too, it is wonderful! I am happy, and now, with this enormous challenge, I will do everything in my human strength to give my best, trusting that the Blessed Mother and Jesus are with me.

Source: “Vinculo” magazine, Chile, April 2022. With permission of the editors.