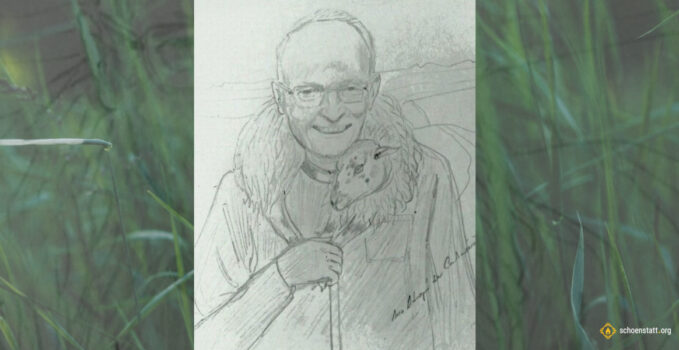 I received this illustration from Ana Adrogué de Cambaceres and it brought to me many sensations, memories and anecdotes that I promise not to tell all of them, but at least some of them. Antonio Cosp has truly been a doer, an entrepreneur, a born motivator… A man of Mary, literally! — 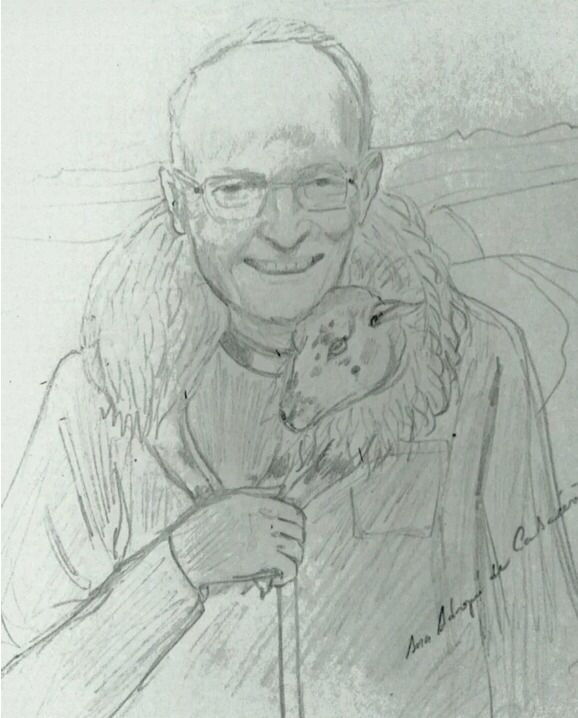 At the end of the 80’s, he arrived in Cordoba with his unfailing smile and his lively eyes, eager to advance in the work of Mary, which was already well established in the Province. Not long ago the Schoenstatt Apostolic Movement had received a house from the Pallottines and its use was extremely limited.

P. Antonio (or “PA” as he used to sign his emails) saw in it his first step in Cordoba: That house should be the center of the Movement and of the action of the family!

Today, the Father Kentenich Center shows a very intense activity with its Shrine of Life and Hope on its grounds.

The good shepherd carried the whole family… on his shoulders!

“I have two guests…We’ll just have some soup”

along with my wife, we served as assistant leaders within the then Family Work and with Father Antonio we worked very hard and very well (after each meeting, the next morning we had the minutes, written on a typewriter, under the door…).

One day he told us that two Schoenstatt Fathers were visiting him, one from England and one from South Africa and that “it would be very nice if we could share a meal…Something simple, a sopiiiita” (Father always stretched out the vowels to emphasize what he was saying…).

That night the three of them arrived and after the warm greetings, since Schoenstatt is a big family, Father told us that he could not stay, he left us alone with the two unknown fathers and only one of them spoke English!

The good shepherd uniting his family and achieving an encounter we will never forget!

The House is too small for us

The Shrine of Solidarity in Villa Warcalde will always remember that it was the first one that Father Kentenich, founder of the Schoenstatt Apostolic Movement, “blessed from heaven” (October 6, 1968). With his characteristic vision, Fr. Antonio saw with absolute clarity that this land, of one and a half hectares, was very small and that the adjoining land had to be conquered spiritually and then economically, something unthinkable for everyone since it was a land of the same size! Very expensive!

He then began, with his enormous executive skills, a campaign to raise funds (the first dollar was given by the then Head of the Boys’ Youth, today Father Cruz Viale) and dozens of projects were carried out with that purpose …. Until the miracle happened!

Marta and Augusto Reyna never played a game of sports predictions (PRODE) but they decided to try their luck and they promised the Blessed Mother that if they won, they would give all the money they needed to buy the land?

They put their grain of sand and… The Blessed Mother manifested herself in all her splendor!

Walking through the land where the shrine is located today, it is impossible not to remember Fr. Antonio and his absolute trust, leaving “a great part of the responsibility to the dear Mother of God” (PJK).

The good shepherd carried the future of the family of Cordoba on his shoulders!

A great dreamer, a great motivator, a great executor …. A great one, dear Father Antonio Cosp!