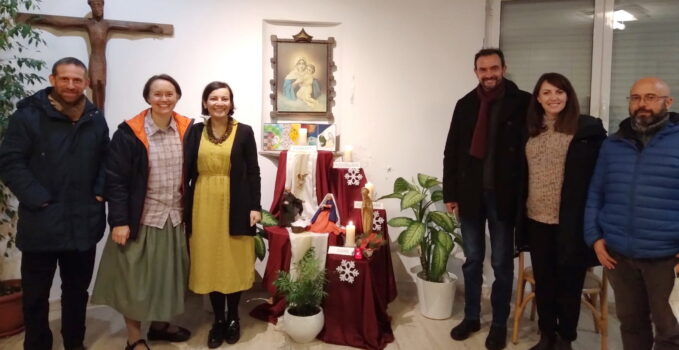 For fifteen years now, week after week, a small group of Schoenstattian faithful have been unfailingly meeting every Wednesday at the Cor Ecclesiae Shrine in Rome to pray the Rosary. As long as it was possible, and I could find a ride since I do not drive, I too most willingly would join them to participate in a prayer gathering of a rather new type for me, who grew up in a Protestant environment. — 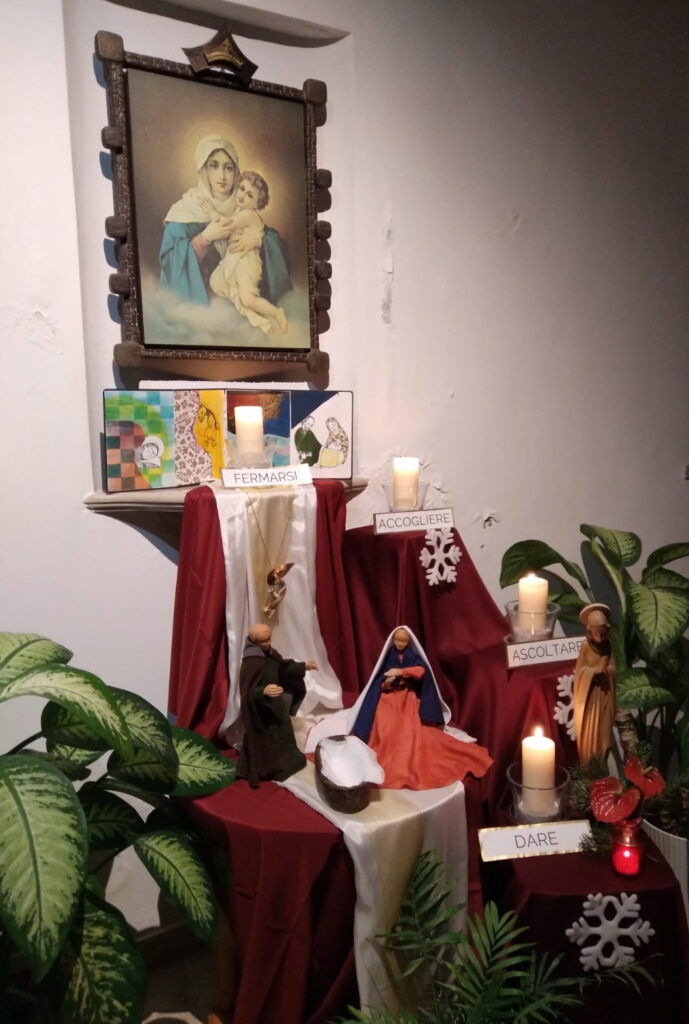 I must admit that at first I met with difficulty in being penetrated by the rhythm and cadence of what seemed to me – please forgive me! – an endless “litany”. But only in the beginning, for very early on I too allowed myself to be taken by hand by this dear Mother, to journey along with her through the various stages of the Mystery of the Son, on the path of his and our life, to the very end and beyond.

Hail, Mary, full of grace . . . A prayer that is no longer limited to only one hour a week, but now accompanies me during long walks in Rome, either solitary or in the midst of crowds wearing masks. A prayer that, when well reflected upon, offers deeper understanding and value to the immense suffering and various forms of solitude imposed by the reality of Covid-19. We walk through the streets of the city, Mary and I, two women together but never alone. Where there is the Mother, there is always the Son with his sure and protective omnipresence, along streets that have become slightly more irregular than before.

Four Stages Along The Way With Saint Joseph

In addition, where she is, there too is he, dear St. Joseph who is ever by our side with his silent yet reassuring presence, and his great example of faith. Just in case we underestimate his paternal presence, often barely perceived in the shadow of Mary, not to mention that of the Son, during the period of Advent we were blessed with a wonderful opportunity to reflect upon the person of Joseph, precisely during the meetings on Wednesday of the meditated Rosary at the Cor Ecclesiae Shrine: Four Stages Along The Way With Saint Joseph, as we journeyed toward Christmas. This very special event was organized and most carefully prepared by Laura and Giacomo Brunelli, Pamela Fabiano and Sr. Julie Brcar.

As pointed out by the speaker of this first meeting, Prof. Guido Tracanna, poet and religion professor, the temptation to stop, to allow oneself to come to a halt, is very powerful when we find ourselves facing anything that may upset our plans, our dreams, ideas and precious projects. Joseph too wished to call everything off when he discovered the child Mary was expecting was not his! And he would have indeed done so were he not the righteous man he proved to be. Instead, he continued moving onward, perhaps with slower steps as he pondered the events that were taking place, nevertheless he continued onward without stopping.

Yes, indeed, Joseph believed without fully understanding.“For those who have faith, no explanation is neccessary” (Saint Thomas Aquinas). In his faith Joseph can be compared to Abraham, for like him, he too believed not so much in the design, which in any case was beyond his ability to understand, as in the Person speaking to him about the mysterious design he has been invited to become an intimate part of. Through faith Joseph welcomes, because he knows how to listen. This was the heart of the meditation of Fr. Facundo Bernabei, Director of the Schoenstatt Movement in Italy.

On the third Wednesday of Advent our meditation guide was Msgr. Vincenzo Francia, Mariologist and professor of Marian Iconography at Marianum in Rome. Marvelously attracting the attention of all those present, he underlined the huge difference between hearing, because we are not deaf, and listening; that is, effectively turning one’s gaze towards the voice one hears, giving it our utmost attention. True conversion begins with listening. Only in that moment was Joseph ready and willing to comprehend and undertake the path awaiting him.

In this final meeting before Christmas, it just so happened, I would like to think not merely by coincidence, that our guide was Giacomo Brunelli, he too a groom alongside his bride Laura, who is expecting a child. His testimony as a husband and future father perfectly drew to a close these Advent gatherings. In fact, to bring to conclusion our special journey in a perfect and most touching way, Giacomo chose to offer a personal testimony of his and Laura’s experience with the Rosary, which they pray faithfully at the shrine as a couple. For them to give, as regards every area of their life – work, social life, attention to others -, means a giving of the love they draw upon thanks to prayer.

And so we brought the year to a close awaiting Christmas in the company of Mary and St. Joseph, particularly dear to Pope Francis and venerated in a special way during the year dedicated to him. Stimulated by our guides at the Rosary, we once again traveled over each stage: stopping, welcoming, listening, and then giving. What a distance we have covered! And now that the holidays are over, and we return to our usual Wednesday meetings, we move ever on, enriched and strengthened.