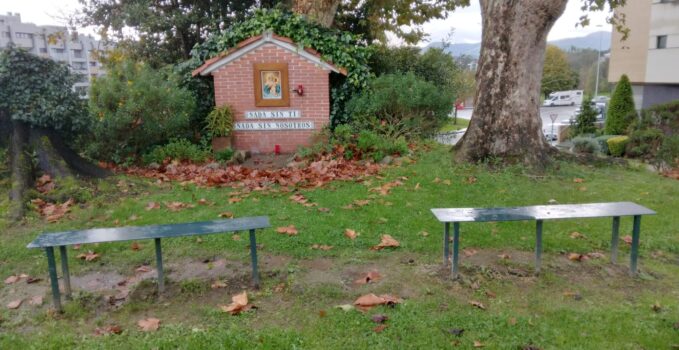 At the end of the visit to the Cathedral of Oviedo – from where the original Way of Saint James started – we asked ourselves: Where should we eat lunch? I wanted to do it right there, in Oviedo, in a cider house, but my husband had another idea. —

It is really extraordinary how the Mother uses even the ordinariness of our daily life to manifest Herself and lead us wherever She considers necessary. For what purpose? Only She knows… and, who knows, so will we in the near or distant future.

My husband wanted to return to Gijon and have lunch at a restaurant where he had been nine years ago during the IV Iberian Encounter of the Schoenstatt Men’s Rosary. It seemed so important to him that I decided to agree. So we went in search of the restaurant. We parked the car on a street where there was a courtyard surrounded by fences and, inside there was a tower with the image of St. John XXIII, to the left a low house and, in the background, a building a little higher than the “Colegio Virgen Mediadora” (Virgin Mediatrix School). “I have already been here, he told me, we had a meeting here, I remember”. We continued on our way to the restaurant.

On the way back to the car… 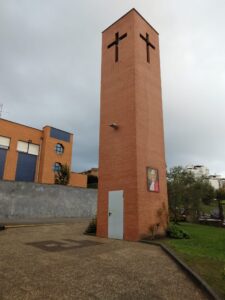 After lunch we walked by the same place again on the way back to the car… “I think this is a church – however, you can’t see any building that resembles the image we have of a church”, Helder told me trying, for sure, to relive the memories of that place. “There was also a wayside shrine that, it seems to me, was a bit abandoned as Jesus Cedeira told me.” We continued walking down the street in search of that wayside shrine. At the end, when a small park ends, which extends from the courtyard with the tower to a street, my husband began to climb some rough steps, we bordered some leafy bushes and, suddenly, there she was… the wayside shrine.

Very well cared for and, with signs of life. The lighted candles and the Rosary speak to us of real stories of love, trust and abandonment. In front of it there are two iron benches that transmit us the certainty of not being just a place on the way, but a place to stop and pray….

It is always an emotion when we find ourselves in front of our Mother. And without looking for it, therefore, the encounter is received as a gift from Her. 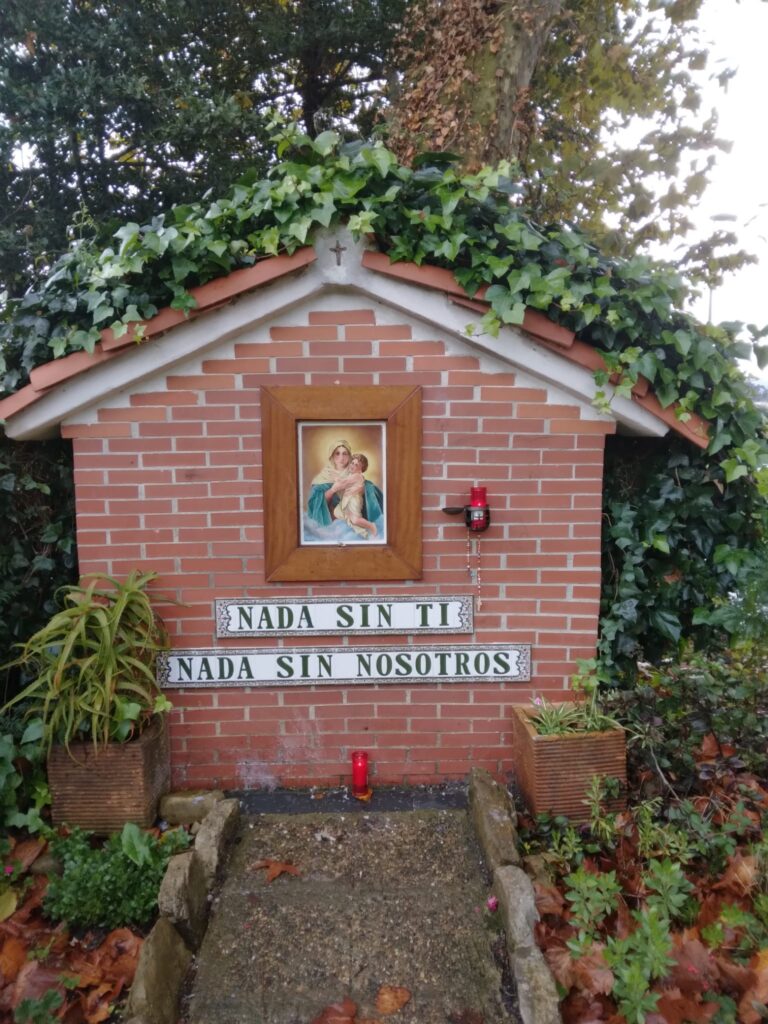 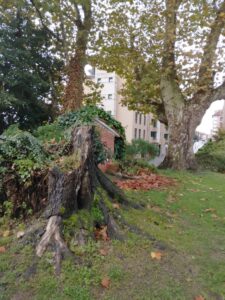 I learned that this Wayside Shrine is so called, since it is located in Viesques-Gijón.

In 1990 the Schoenstatt Rosary Campaign arrived in some parishes of Gijón. In 1997, thanks to some couples from Madrid, who traveled to Asturias, a group of couples was formed, and later, a group of young people and another of professionals. In 2008 the Schoenstatt Youth of Spain went on mission in Asturias – Avilés, Colunga and Viesques-Gijón. This is the year of construction and consecration of the Wayside Shrine.

Juan Barbudo, who accompanied the Mission, tells us that there was a miracle. “When the missionaries went to prepare the activities, the parish priest, Fr. Juan José Deniz, invited them to establish a corner for Our Lady in the parish grounds… (Let us remember that we are in the lands of the Patroness of Spain, La Santina, venerated in Covadonga and enthroned in this church outside to the right of the door of the church). Soon they began to dream of a Wayside Shrine and set to work, knocking on doors, asking for help inside the parish. They went from having nothing to having everything they needed, but not before having to increase their contributions to the Capital of Grace. Adoration vigils, nightly pilgrimages to the foundations, conquering the land by sleeping in the open air. A builder offered all the materials and, another sign of Providence, the head of the mission studied architecture and elaborated the whole project. They began clearing the land on July 23 and on July 28 it was ready for the blessing. 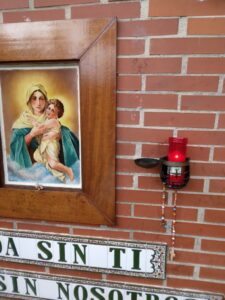 Here I would like to open a parenthesis to speak about the then young Jesús Cedeira (he collaborated with several articles in 2012 for schoenstatt.org) who headed the small Schoenstatt Family of the parish, who played a dynamic role in all this process and in the development of Schoenstatt.

Jesus’s life is an example, both as a person and as a man of faith. He was born with a congenital disease (Werning Hoffmann’s disease), which prevents him from having any movement from the neck downwards. Is this an impediment for him? NO. He has a PhD in Psychology, he is an expert with the computer, he is a Lector in the Church, responsible for the Pastoral of Health… he participated in the III Iberian Meeting of the Men’s Rosary on April 10 and 11, 2010 in Pozuelo, and then offered to host the following Meeting in Gijon and Covadonga the IV Iberian Meeting of the Men’s branch, which took place in Asturias on April 21 and 22, 2012 and, it was all organized by him including a script of 38 pages. He was present in Aveiro at the 1st World Encounter of Schoenstatt Men.

He has such a plentiful life that, a few years ago, in a testimony sent to Chile, he said: “I love to live. I am never bitter or bored. In my love for life, faith played a primary role, accompanying me, in an infused way, in all of the most important moments of my life. My illness has not been able to stop my desire to live, and I have always managed to overcome the countless difficulties that have come my way with the moral strength that comes from the Mother of Heaven (…) As a practicing Catholic, I reject euthanasia…”. I know him and his wonderful parents who always have to travel with him. Schoenstatt Father Michael Lencastre called them “the holy family”.