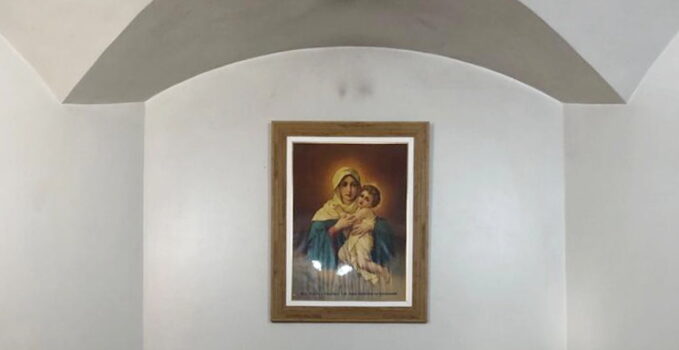 “What if we launched a large international campaign seeking contributions to the Capital of Grace to help our brothers and sisters in Santa Cruz do Sul to reconquer and rebuild their shrine? Let us create a great current of support and accompaniment for them and show them that there is also community in Schoenstatt. It is an idea…” An idea that Claudio Ardissone from Assunción suggested to his international team members at schoenstatt.org when he saw the pictures of the interior of the shrine, with its small framed picture of our Mother Thrice Admirable, a few simple chairs, no altar, and the walls bearing the marks of the Holy Spirit symbol, the Father Symbol, the “Ave Maria” frame … In a few minutes, priests and lay people from Bolivia, Germany, Mexico, Spain, Portugal, and Argentina had united themselves to his suggestion. Community of destinies, covenant solidarity, on the eve of the 31st of May. —

Let us briefly recall the last few months of this shrine that was blessed in 1974. After resistance from the laity of the Schoenstatt Movement, many court cases involving the Public Prosecutor, the municipality, and the legal custodians (the Sisters of Mary from the Santa Maria Province in Brazil), a decree was given to reopen the shrine, after the Sisters of Mary closed it last year in a surprise operation, taking the altar and all of the decorations of the shrine to their house in an other part of the city. The initial plan was to demolish the shrine, sell the land, and one day build a new shrine in a place that is still to be defined…and bought. This original plan failed thanks to the resistance of the lay movement and the intervention of the municipality, who wanted to preserve the place because of its religious and tourist location in Santa Cruz do Sul and clarified that the donation of the land was conditional: it should be used for religious, educational, and social purposes. And a donation cannot be sold. When it lost its initial purpose, the land returned to the municipality. These are only the facts, listed briefly here. The details can be read in the articles in schoenstatt.org and the local press. 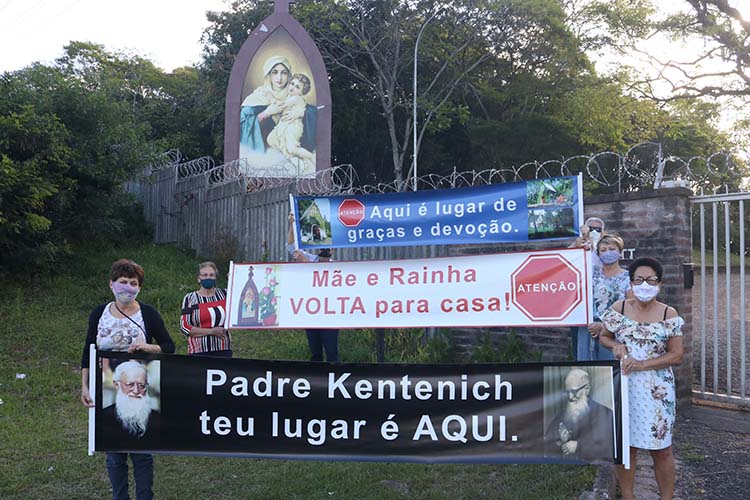 To whom does the shrine belong? 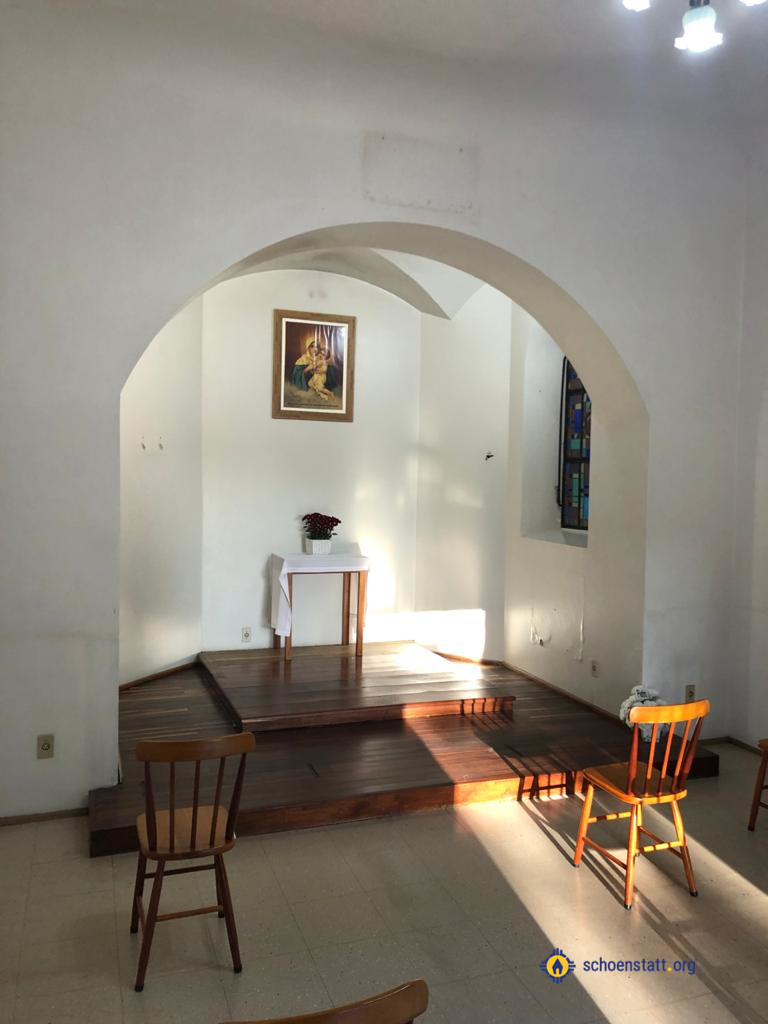 This is how the shrine in Santa Cruz do Sul looks now.

But behind these facts are the tears of the founders and their children who built this place with their own hands. Behind these events there are also thousands and thousands of pilgrims who year after year come on pilgrimage to this place of grace to pray and offer their joys, grief, and hope. Behind it are hundreds of Covenants of Love sealed in this shrine. Behind this is the desperate cry of many Schoenstatters: “They stole our shrine.” Behind all this, there is life. Looking at the marks on the photograph, one can see that history cannot be erased.

The issue does not only emerge among the schoenstatt.org collaborators: To whom does the shrine belong? The place does not belong to the Sisters, but to the municipality. The municipality gave it for the shrine to be built on the land. If there is no shrine, they will have to return the land. The shrine itself, legally belongs to its owners or legal representatives, in the case of Santa Cruz do Sul, the Sisters of Mary. And, except for selling the donated land, the legal owners can do what they like with their property. Legally, yes… Just as legally the “Frauen” (Ladies of Schoenstatt) in Switzerland can demolish their shrine in Lucerne or dismantle the one in Mount Regina and sell the house. Or how the Pallotines, before 2013, who had the legal right to paint the original shrine in pink, remove the roof, change the picture [of the MTA], demolish it or sell it to Opus Dei or a chain of casinos. Until the end of time, we must give thanks to God that they did not make use of their legal right over the shrine, knowing that respect for religious places is also a right and a moral obligation. We can learn a great deal from the Pallotines, especially in their final gesture to give the Original Shrine to the Schoenstatt Apostolic Movement.

“This situation in Santa Cruz do Sul can be repeated in any other place. If we are not clear about our mission and our service to the Church and society, we will disappear, just like many other charisms have disappeared,” said Paz Leiva, from Madrid, referring to an article by Iganicio Quintanilla.

There are shrines that do not belong to any Schoenstatt Institute. “The shrine in La Loma in Paraná, Argentina, is an example of this. It was started and maintained by the laity, and today it is a place of pilgrimage and the Blessed Mother gave vocations to the Federations and Institutes,” commented Juan Eduardo Villaraza, from Paraná.

The shrine in Rawson, Argentina, was entrusted to the local Schoenstatt Family, led by a Federation couple, who received permission from the General Presidium. Or the case of Salta, or in Argentina, where a Schoenstatt Sister who was the spiritual director for the movement had to leave and the shrine went directly into the hands of the laity, just like that. This is very common, and not just in Argentina. It is worthwhile to find out where there are similar cases in other countries or to confirm if all the shrines of the world are under the responsibility of the Schoenstatt Fathers or the Sisters.

Almost all of the shrines in the German dioceses “belong” to a non-profit association made up of representatives of the Movement’s branches and communities in the diocese, who take responsibility to fill it with life and to maintain it financially. 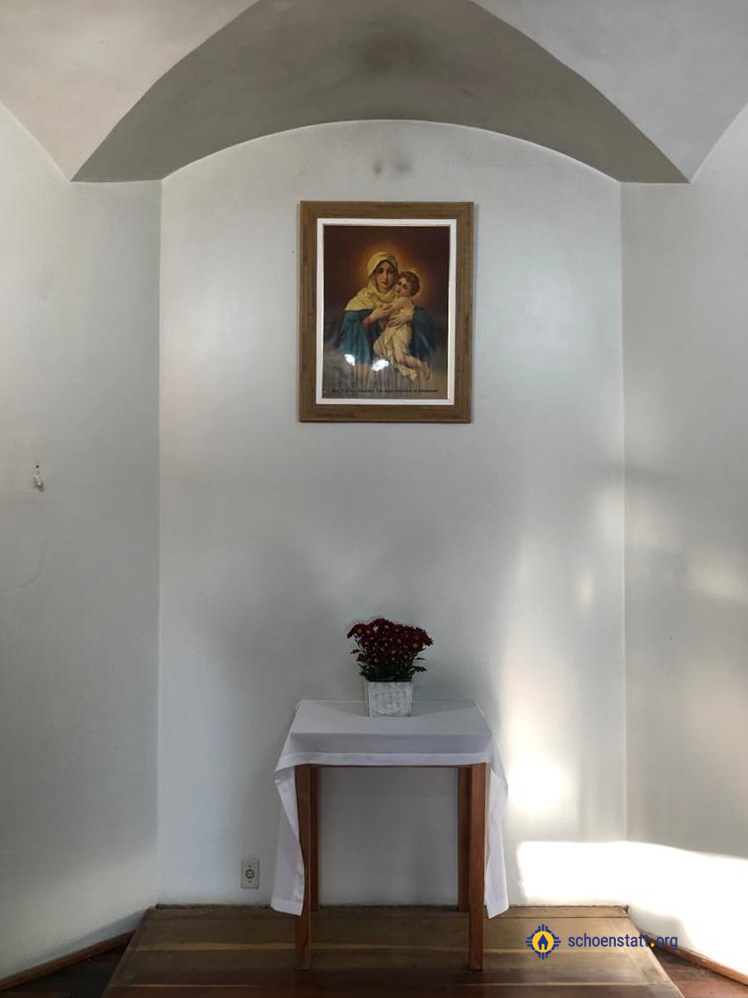 “If the Sisters left, leave the place for the laity… The time has come for the Schoenstatt members to take responsibility… Repopulate the shrine. Show that the laity are also able to give life to a holy place where heaven touches earth,” says Fr. Esteban Casquero, form the Institute of Diocesan Priests in Argentina.

It is not as easy as it seems. According to Ruy Kaercher, from the Family Institute in Santa Cruz do Sul and the leader of the Schoenstatt resistance against the closure of the shrine (or its transfer to the Sister’s house), the Sisters do not want to sell (or give, following the great example of the Pallotines) the shrine to the laity. “The Sisters are the administrators of the place and do not allow the Movement to take responsibility,” explains Luciana Rosas from Curitiba, who has been following the story for over a year.

“Did the Sisters act in accordance to the voices of the soul, of being, and of the times?” asked Juan Eduardo Villarraza. “On the other hand, this thing of not leaving it for the “laity” is strange for me. The sisters….they are lay persons. They have not taken vows and, if a Sister leaves the Institute, there are no canonical measures to be taken. Furthermore, it is sad to see the number of voices, including the municipality, who are saying no….In summary, they cannot understand that we are instruments, administrators, and not owners. Has the bishop already spoken about this? Because if the [Church] hierarchy are already talking, then it is even more serious.”

“Here in Santa Cruz do Sul, since November 2020, we have not had a shrine. On 1 June, the agreement proposed by the local Public Prosecutor, the mayor’s office, and those legally responsible for the shrine, will be ratified with the aim of reopening the shrine. As a start, it will only be open on Tuesdays, Thursdays, and Sundays from 14h to 17h. The members of the Apostolic Movement, who are against the transfer of the shrine from its current location, will use the reopening to hold a time of prayer. During the hours established for the reopening, members of the Mother’s branches, the Family Institute, and other branches will alternate to pray the rosary, asking the MTA for clarity in this sad situation that we are experiencing,” commented Ruy Kaercher.

In an interview with Radio Gazeta, the attorney general, Erico Barin emphasized that from a religious perspective, the reopening will not be like before. “The Public Prosecutor cannot interfere in the religious activities, simply in the public use of the building, which had been donated by municipality. These issues, such as the celebration of Mass, for example, the faithful and devotees must discuss directly with the congregation to arrive at a consensus. The Sisters have the autonomy to open the space to the public when they want on other days and at other times.”

It will remain in the hands of the Schoenstatters.

“Life always reveals itself! We pray that the members of the local movement can reconquer the place and care for it so that the Blessed Mother has contributions for the Capital of Grace so that the pilgrims will receive graces from the shrine,” said Fr. Esteban Casquero.

In Covenant Solidarity with Santa Cruz do Sul 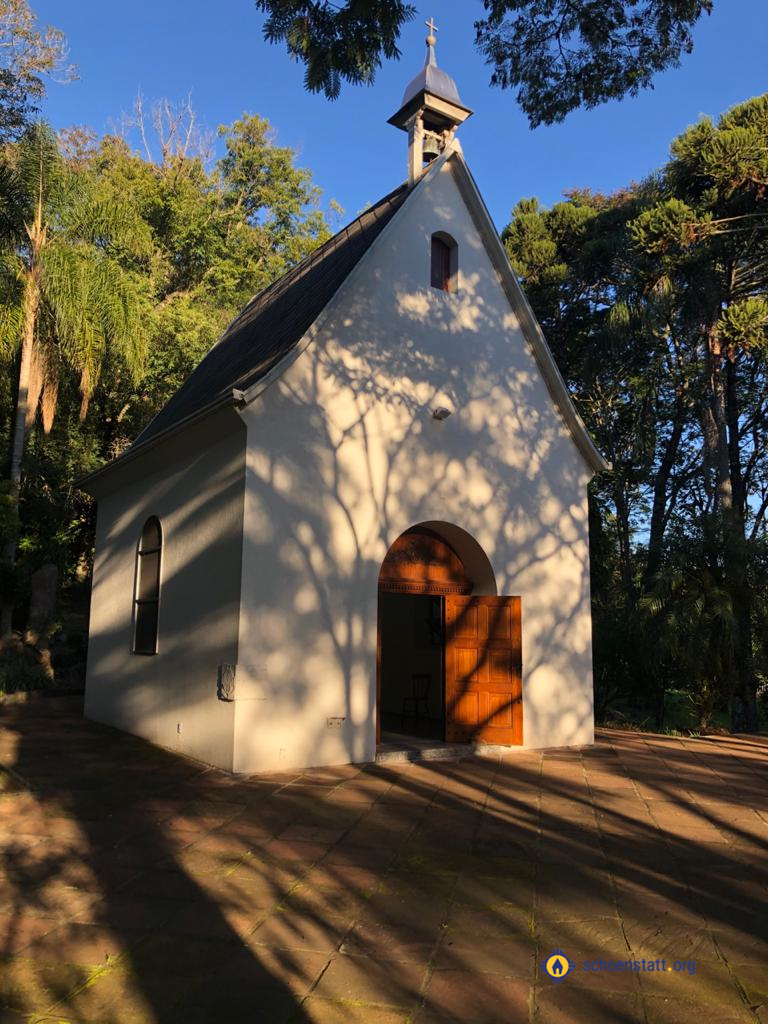 And it was in this moment of dialogue on WhatsApp that Claudio Ardissone had the idea to start a great covenant solidarity with the movement in Santa Cruz do Sul.

“Perfect, I will join in and will invite those I know as well.” But I think it is good that the people there also know this,” says Fr. Esteban Casquero. They will certainly read this article.

“From Santa Cruz de la Sierra, Bolivia, we will united with our brethren in Santa Cruz do Sul in Brazil. We have a completed shrine, but we have not yet blessed it; in a certain way our stories are the opposite, but we will join in the campaign that will be started,” says Alexandra Kempff from Bolivia.

The marks on the shrine wall speak volumes. Covenant history cannot be erased. It is sad to see the interior of the shrine like this. Finally Juan Zaforas, from Spain, says: “It is sad to see it like this, but the Blessed Mother does not need anything to work miracles. It could be a sign. The good news is the reopening of the shrine.

Onwards, brothers and sisters of Santa Cruz do Sul. They are not fighting alone. We are here. From many peoples and nations in covenant solidarity. 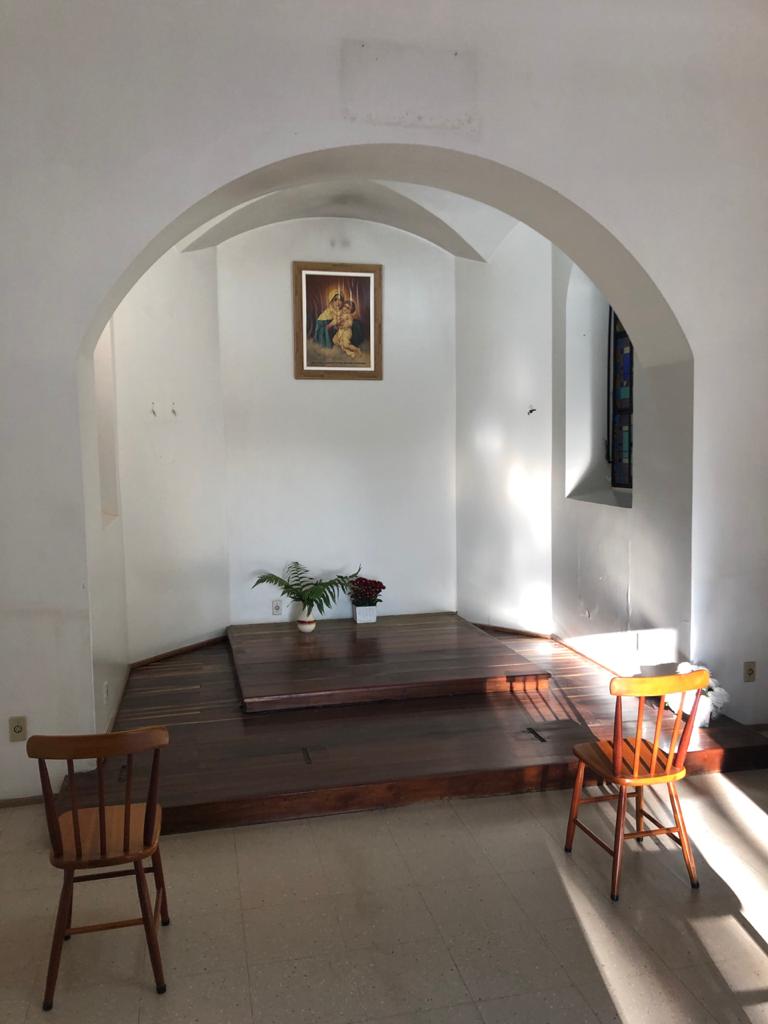