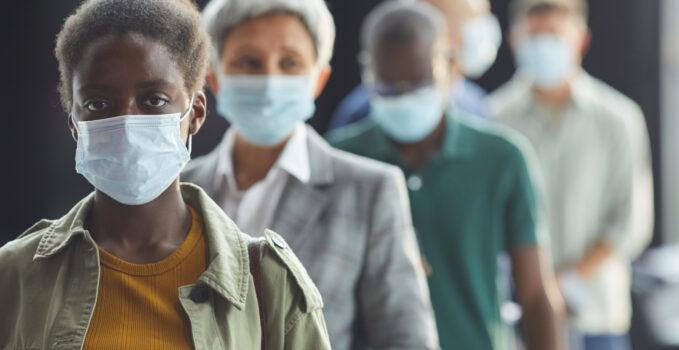 A morning, like any other I am at work, at a bank, attending the public. The office is located in a city south of Madrid, in what could be defined as the periphery in its very essence. —

It is home to immigrants from different parts of the world that have come to seek a better future in the West. 80% of the population is foreign: Moroccans, sub-Saharans, also people from Eastern Europe (Polish, Romanians, Bulgarians, Ukrainians…), from South America (Colombia, Ecuador, Peru…) and Chinese, many Chinese. Most of them can barely speak the language. They know they are strangers in an environment that is often hostile and they feel insecure. For them, having a bank account is essential; they know that without it they have no access to a job or to official aid; they even need it to obtain their residence permit as foreigners.

There are many people waiting their turn in a queue that even goes out into the street. They do it with patience, better or worse disguised, and almost all with a stern look on their faces. Each one comes to solve a problem.

Is it possible to solve this problem?

I don’t know how many people have already passed by me today. One, another and another… Next turn: a woman of a certain age and a younger man, with unmistakably Andean features, approach. Very modest, they stand in front of my desk.

“It’s the first time someone calls my mother ma’am”

I say goodbye to them, shake their hands and wait for the next customer, as I watch them walk away towards the door. Suddenly, I notice that on the doorstep they stop, talk to each other and the son tells his mother to wait there. I see him retrace his steps and head back to my desk. What did he forget? Why is he coming back alone? I’m sure he has a bigger problem.

And he left. His face reflected the joy of one who had received much more than expected and not measurable in a monetary way.

In almost forty years of profession, no one had ever turned to thank me so much for so little. That woman and her son felt that they had regained their dignity as people, simply because I had treated her as what she was: a lady. But the most surprising thing was not the treatment but that they came back to thank me expressly for it. That day I received much more than my salary.