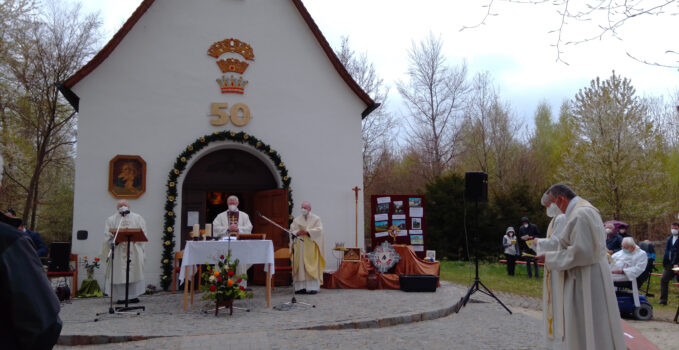 In other years there were always around 2,000 pilgrims on May 1, but the pandemic crossed that out! Only 200 were allowed outside around the Shrine. Numbers and texts were not enough. “Fence-sitters” were still scattered in the woods and meadow. So at least the little children had a good opportunity to play.

No singing, but lots of music

Seven priests celebrated with Cathedral Provost Alfred Rottler and the leader of the Schoenstatt Movement in Germany, Father Ludwig Guethlein, who did not miss the opportunity to come to his home diocese for this celebration.

Although they were not allowed to sing, the KoLan band from Koesching arranged the festive mass with rhythmic songs for their own as well as our joy. The coronation Mass was not by Mozart, but it was accompanied by a beautiful bird concert. We were, after all, in the middle of the forest under beech trees. For the coronation celebration that followed, we had our own ensemble of two Sisters of Mary and a former member of the Schoenstatt Boy’s Youth Group (SMJ), now a father of three. He played the musical interludes on the electric piano with a lot of momentum, accompanied by Sr M. Bernadette with her flute.

During the offertory, representatives of the branches brought their gifts. How happy might the queen have been? And even more so the children when the families brought their gift: a small sandbox. The new playground is planned near the meeting house.

Once again, the crown and scepter were presented, which are symbols that used to be displayed in the entrance area of the youth education center House Sonnenau. After a “Sleeping Beauty sleep” they will soon find a worthy place in the youth center again. Elisabeth from the MJF (girls/young women) promised this. A “crown of fire” was brought by Luke from the SMJ; this fiery gift from the JM (Juventud Masculina) Mexico travels with the young boys. With it, they bring a petition for a burning relationship with Mary.

An appealing short coronation prayer had also been created during the preparation time, as well as a contemporary coronation song.

The crowning glory was the “Contribution Crown” that had been filled and decorated for weeks in the Shrine with precious gifts – glittering stones (capital of grace). On a “crown leaf” one could write one’s gift for the Queen, but also one’s petitions. These then ended up in the jar.

Another gift, inconspicuous but important, must be mentioned: the signet with symbols for each sub-community in the diocese, which has its place on the wall of the Shrine. The speaker expressed what is the concern of all: “Strengthen our togetherness! Take our dedication and commitment. Choose good collaborators from all generations!” 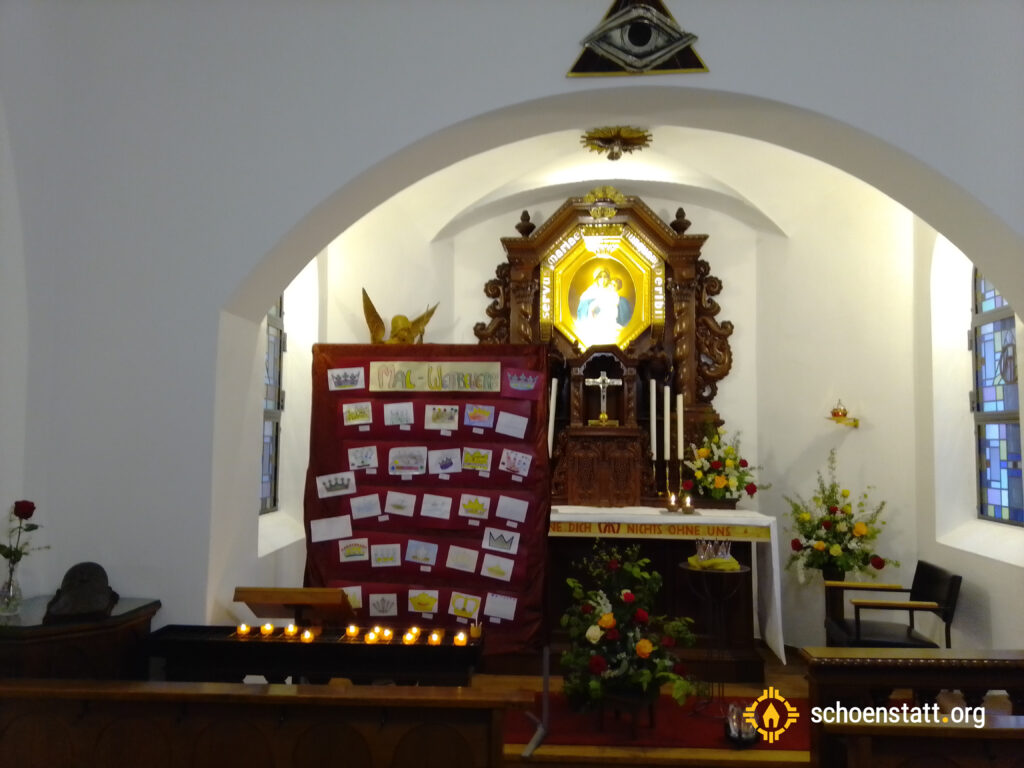 At the coronation celebration, which was characterized by the keywords thanks, trust and dedication, representatives from other Bavarian dioceses also had their say, similar to 50 years ago. At that time back then, they intervened in the coronation for the first time.

Canon Father Martin Emge, President of the Schoenstatt Family in Bamberg, confessed that he learned from the people of Eichstaett to choose the Mother Thrice Admirable as his patroness and sovereign!

The leader of the movement, Fr. Ludwig Guethlein, was inspired in his homily by the three crowns for three spiritual impulses. He suggested that we reflect on what the Holy Spirit wants to do among us today. We can be sure that He is in our midst. It is necessary to dare a new beginning with trust in the Queen. We put ourselves at her disposal, just as we are, even in our powerlessness. Through the pandemic, we had made new experiences of church, formed a domestic church. It is necessary to deepen this.

Through the digital possibilities, we could indeed meet each other worldwide. But have we also learned to meet each other in real life? He posed this as a question. The Blessed Mother could help us to have a greater appreciation of real encounters. She could also bring the vision of the origin to life again in us, the enthusiasm of the early days in the construction phase.

Let us also look at what has remained unfulfilled

In the Covenant of Love with the Blessed Mother, we could look at tradition, but also dare to do something new with the sensitivity of the youth: “To be a living crown” says the MJF. In the Boys’ Youth there is a crowning round, he explained to us, the meeting of those responsible. Our founder called the families the “foundation and crown” of the Schoenstatt Work, a high demand, but also a great trust. He said that it was important that on this Coronation Day we let ourselves be personally inspired for a new beginning in the Holy Spirit.

As a gift, Father Guethlein brought the “Pentecost Novena Flag”. It bears as its motif the Pentecost scene from the inside of the tabernacle in the Schoenstatt Shrines.

At the end of the celebration, more crowns could be admired. In the painting competition, some three- or four-year-olds created true works of art. Great crowns were created, some decorated with colorful stones. They can still be admired in the Shrine.

“The pilgrim community ended the celebration, wonderfully framed by the KoLan band, with a consecration prayer to the Patrona Bavariae, the Bavarian anthem played instrumentally – as every year – rounded off the celebration. Unfortunately, it was not possible to get together due to the pandemic,” says someone from the preparation team. “But everyone was happy that the Jubilee was possible, at least in this form, and everyone is looking forward to meeting again after Corona without distance and also to eat and chat at the Schoenstatt Center.”

Not without the traditional rain

Only at the very end of the coronation ceremony it began to drip. How could it be otherwise – said the Movement Leader – because both 50 years ago and during other important events at the Parallele Shrine, it has always rained so far. But the rain has never stopped people from coming to Mary, especially on the feast of the Patrona Bavariae. And smiling, he added: “Otherwise, after all, the celebration would not have been valid in the tradition at the Parallele Shrine.”

A beautiful, royal bouquet of flowers for the queen was the icing on the cake for the coronation day. It was delivered to the Sisters’ House by a gentleman from Koesching. All these are testimonies of love for the Blessed Mother, Queen of May! 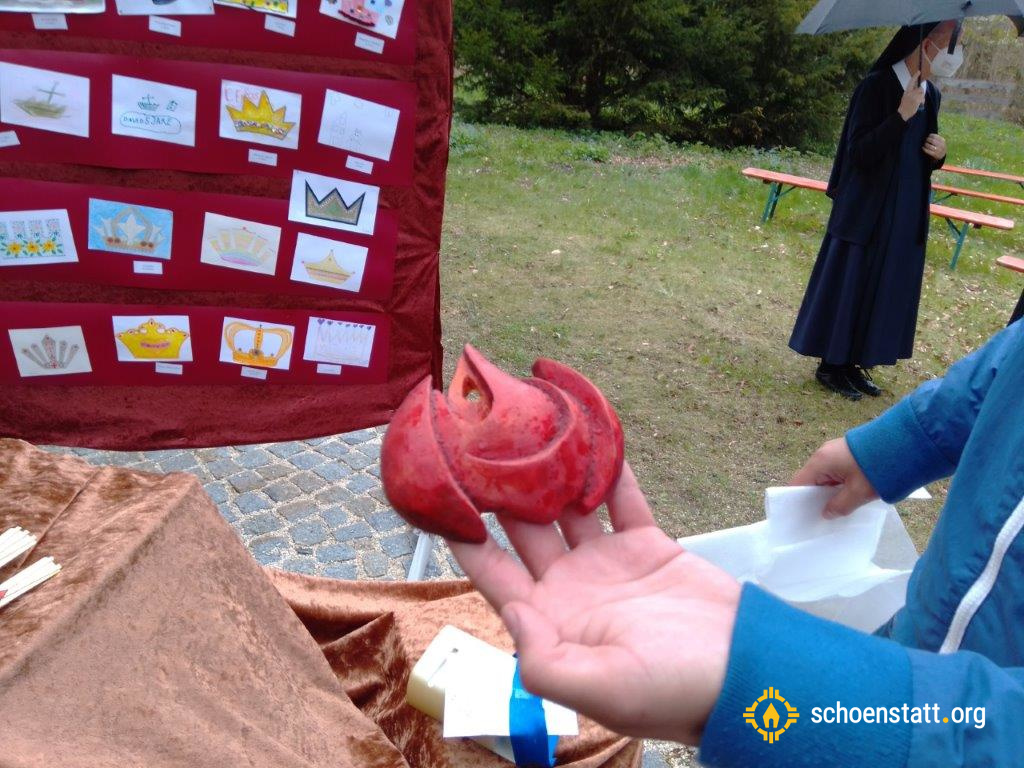 Since Advent, the Schoenstatt Family around the Parallel Shrine has been preparing for this day. On April 6, 2021, the intensive phase began with a pilgrimage to the Cathedral of Our Lady in Ingolstadt to the picture of grace of the Mother Thrice Admirable. This was not because of Corona, but due to the fact that the two crowns had been attached to the picture of grace in Ingolstadt since the Marian Year of 1954. After artists did not find them suitable for the iconic image, they ended up in the safe in the cathedral treasury.

Monsignor Maurer received it 50 years ago as a permanent loan. In this way, the relationship of the Schoenstatt Chapel to the image of grace in Ingolstadt is expressed very beautifully.

On the new coronation picture the historical context is explained:

The two crowns “are … symbol of a historical heritage. In the 17th century, a great renewal movement emanated from Ingolstadt through Father Rem. Father Kentenich learned about it in 1915 and was convinced that a similar religious renewal movement could emanate from the Schoenstatt Shrines today. In the light frame around the image of Mary, ‘Ingolstadt’ recalls this parallel. The title ‘Mater ter admirabilis’ (Mother Thrice Admirable) was also adopted for the image of grace in Schoenstatt.”

Surely everyone can gratefully agree with the refrain of the new coronation hymn: “Mary, heaven and earth touch in the shrine. Mary, blessings in abundance you give us in the shrine. Send us, we are ready. Ask the Holy Spirit!” 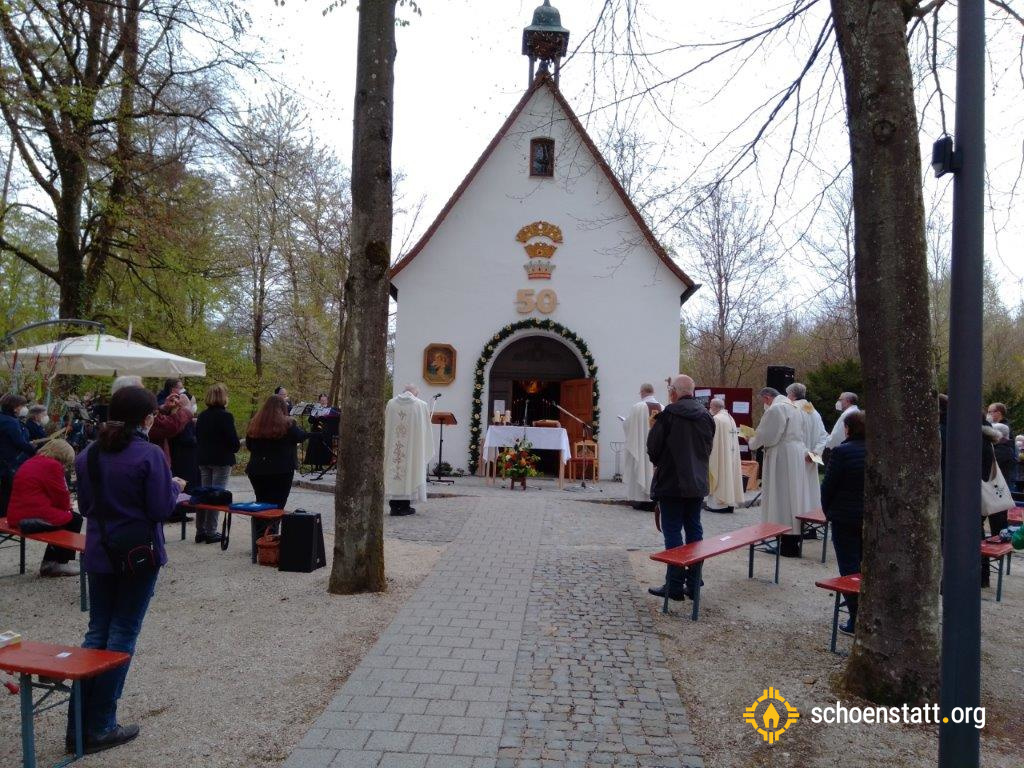