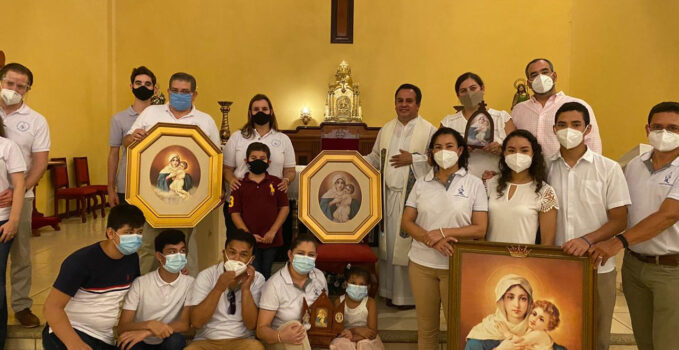 Posted On 2020-10-25 In Covenant Life, Covenant Solidarity in Times of Coronavirus

The celebration of October 18, 2020 was a memorable day for the entire Nicaraguan Schoenstatt Movement, since fourteen families were able to relive what happened in 1914, when they asked the Mother Thrice Admirable and Queen of Schoenstatt to establish herself in their homes, through the blessing of fourteen home shrines, the first ones in this country.— 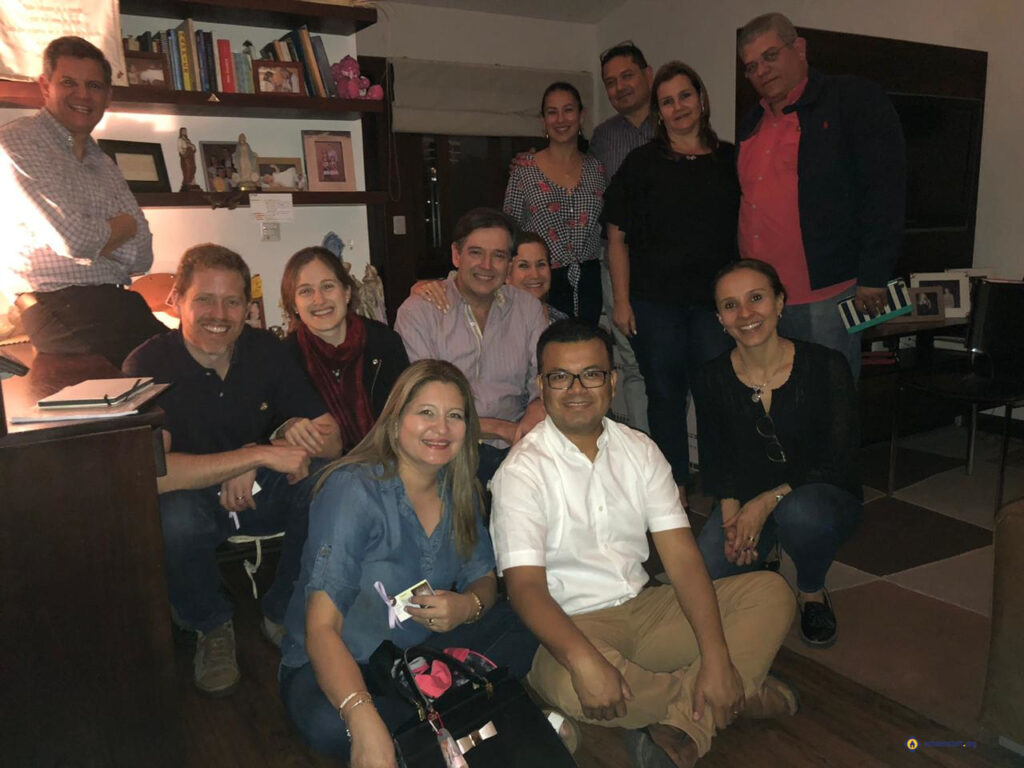 After concluding the year in which they discuss Marriage Sanctity, fourteen families began to prepare to carry out the home shrine workshop, which would make them discover the special grace that their home shrines would give to each couple, along with the graces of home, inner transformation and apostolic fruitfulness that all the Schoenstatt shrines give.  In addition, they had to discern the name of their shrines, motto, symbol and prayer. 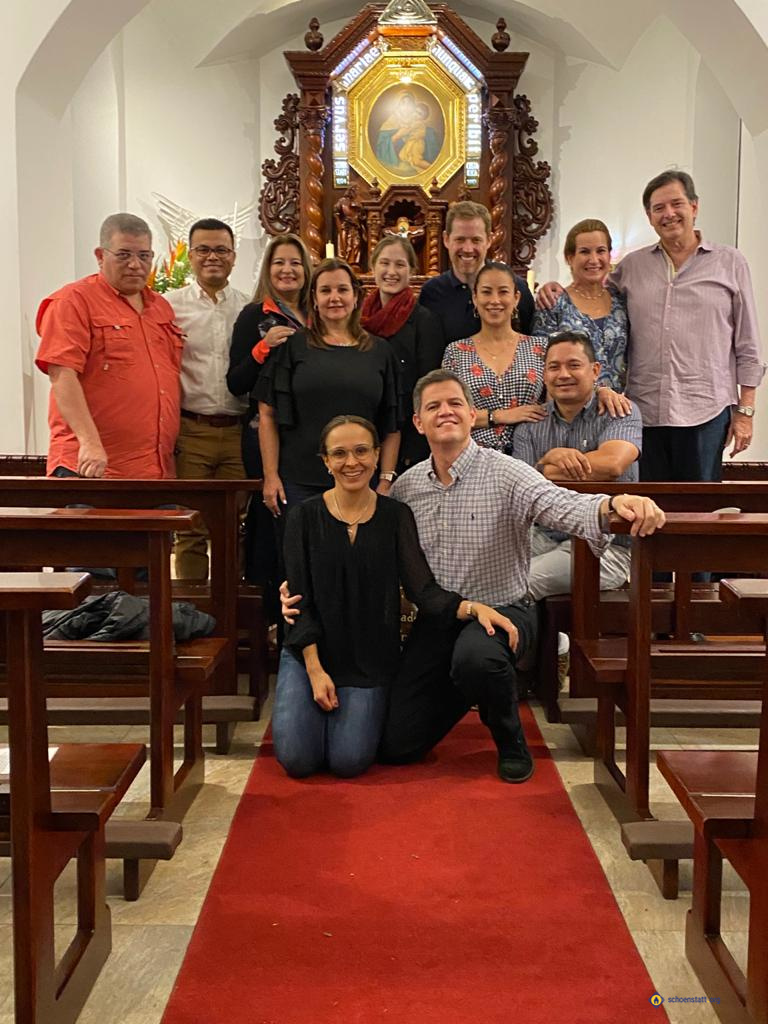 For this purpose, in February, when the pandemic was just looming in Central America, the “home shrine mission” was formed, in which some families, before starting the workshop, traveled to Costa Rica to be able to live, understand and feel what a home shrine is.  The mission began and concluded at the Family of Hope shrine to receive the graces and then four home shrines were visited, the families welcomed us, told us their testimonies and showed us their home shrines, which were nothing more than a sample of their testimonies of how they worked for the sanctity of their marriage.  Afterwards, the final goal of the mission home shrine was to communicate everything seen in that trip, so, when we arrived to Nicaragua, there was a meeting between the 14 families to share everything we had experienced. In this way, the work of the workshop in Nicaragua began, which was soon interrupted by the pandemic.

The moment when the churches were closed

At first we were quite unmotivated by the pandemic. After the enthusiasm with which we wanted to do these workshops we had to cancel the face-to-face meetings, but thanks to God, and since He always manages to get the best out of every situation, we were able to resume all the meetings virtually, with the benefit that people from Costa Rica were able to share with us several topics from the workshops.  In the process of conquering the symbol of the Blessed Mother, we were even able to have a talk by Sister María Auxiliadora, and for Father Kentenich, we had another talk by the postulator of the cause, Father Eduardo Aguirre.  Eduardo Aguirre. That is to say, the whole process was fabulous.

At a time when the churches were closing, we had a strong desire to have our home shrines, which motivated us to work out of love to be able to conquer our desire. While articles against our founding father were circulating elsewhere, his prophetic vision was becoming clearer to all of us. 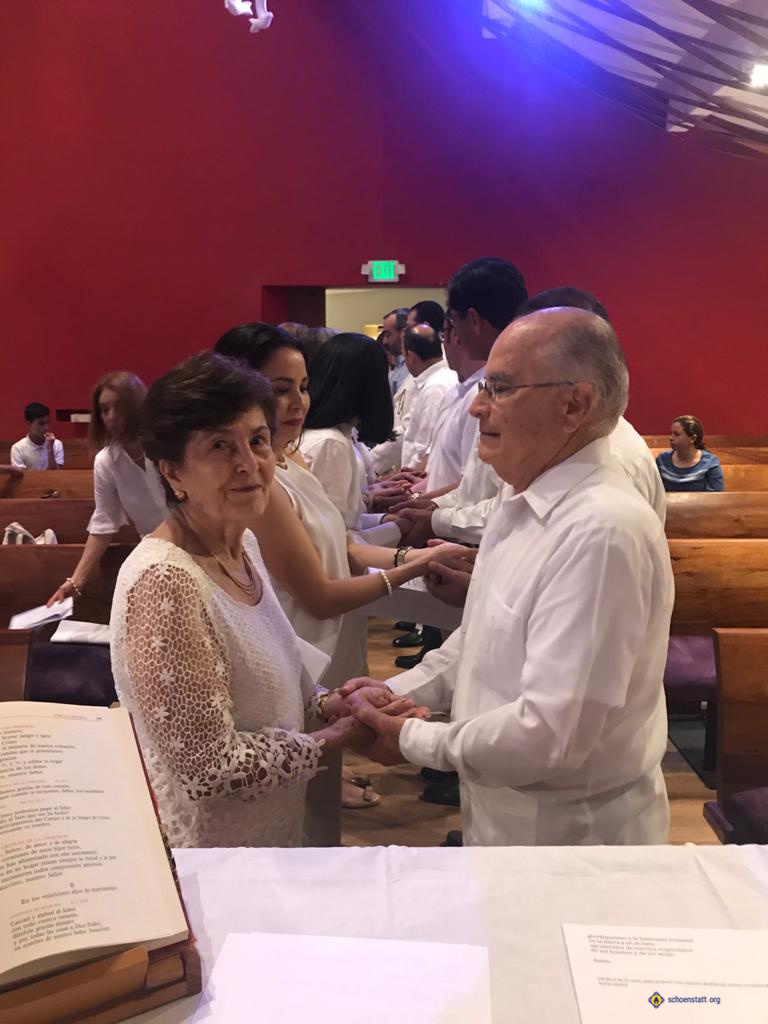 Don Mariano, renewing his marriage vows in 2019, on the 54th anniversary of their wedding.

The home shrine workshop process also had its rough patches.  In Nicaragua, the pandemic peaked between May and July, when many people became ill and died.  Our dear don Mariano Buitrago, who rests in peace, and who had started the workshop with his wife, doña Felicia, died during the course of the workshop.  It was a very hard moment, since he was a beloved member of the Schoenstatt family, and even more so for his group Allies of Jesus and Mary, because he was a true member of all their families. This was undoubtedly the greatest offering of this process, the greatest contribution to the capital of grace.

Nevertheless, it was very touching that doña Felicia, together with the help of her couples’ group, her family and taking into account how well she knew her husband after 54 years of marriage, was able to conclude the workshop. Yesterday they blessed their home shrine “Divino Niño”, which gives the grace of love that they practiced throughout their marriage and was an example to all. She continues to give that love which, however, is accompanied by the love of Christ on the cross, as reflected in her home shrine symbol.

“Who causes so much joy?”

The home shrine blessing had a dual modality. After the Covenant Mass in the shrine Familia de Esperanza, Fr. Jose Luis Correa celebrated the rite of blessing through the Zoom platform from the shrine, along with our co-counselors from Costa Rica, Diego Fumero and Alexandra Martinez, while the 14 families connected from their homes, which would soon house the first home shrines in Nicaragua: “Take the picture of the Blessed Mother with you and give her a place of honor in your homes. In this way you will turn them into small shrines, in which the image of the Blessed Mother will manifest herself by pouring out her graces, creating a holy family home and sanctifying the members of the family,” Father José Luis Correa, our priest advisor, told us. The act concluded with Fr. José Luis asking us something well rooted in the Nicaraguan ideology: “Who causes so much joy?” to which we all responded: “The conception of Mary”, and as Fr. José Luis reminded us: “and the blessing of the home shrines of Mary! 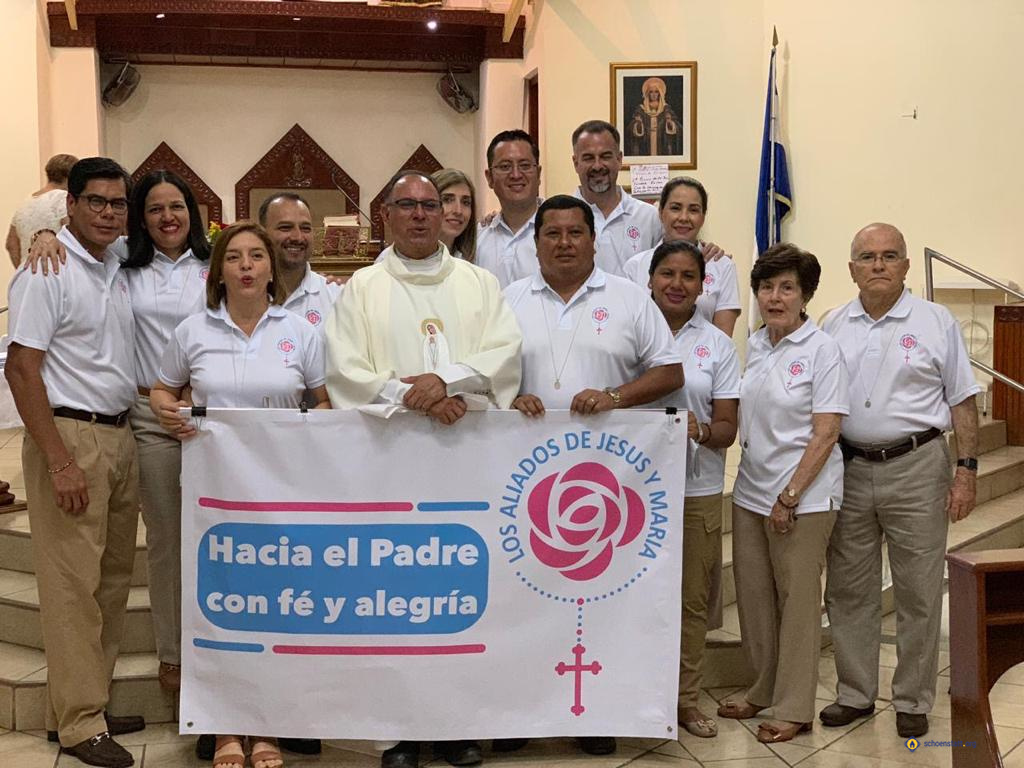 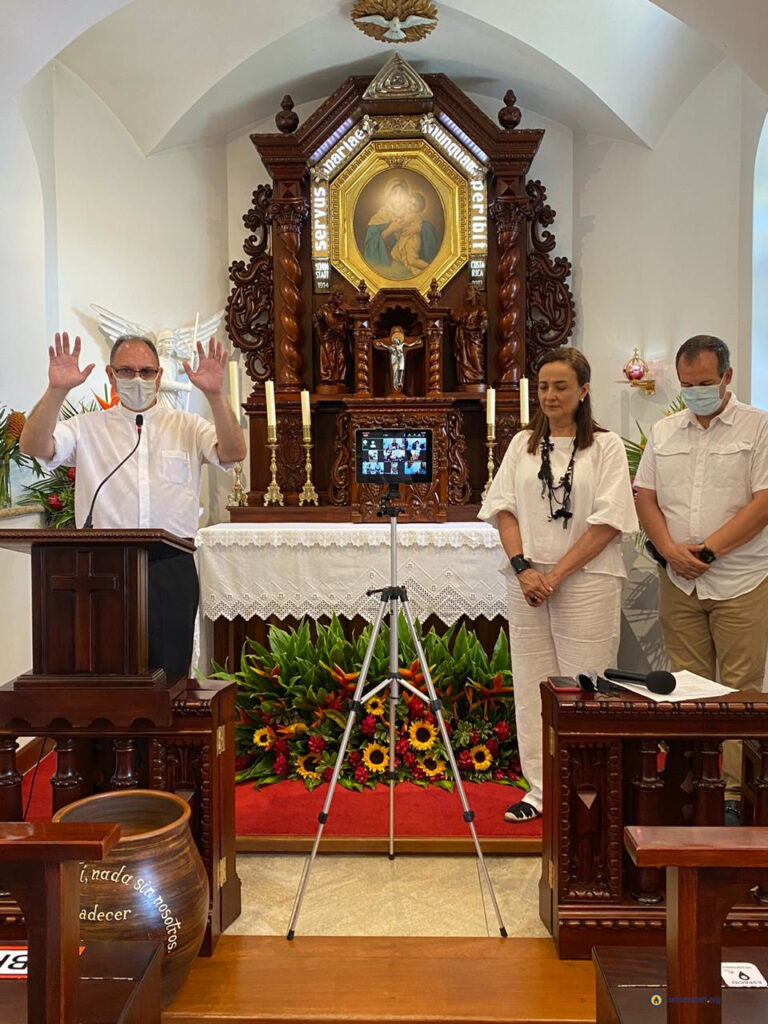 It is noteworthy that it was in a seminary where the process of blessing the home shrines was concluded, since 106 years earlier it was precisely the seminarians who invited the Blessed Mother to establish herself in a small chapel in Schoenstatt.

The Schoenstatt seeds in Nicaragua

As the Dean of La Purisima Seminary, Father Helio Cortez, who celebrated Mass at the seminary, commented: “nothing is a coincidence”.  He had already had the pleasure of visiting the Schoenstatt shrine in Miami and had touched him deeply, but he did not know about the existence of the Movement in Nicaragua. Furthermore, as he said in his own words, we came to celebrate 106 years of the gratuitous love of God manifested in the Schoenstatt Work on World Mission Sunday.

“What we are doing here will be a new beginning towards a new era in the development of our family.  It is a joy for us that all our children are filled with the idea of the living shrine, and that they love you, our Mother Thrice Admirable and Queen of Schoenstatt” ( Fr. Kentenich)
He motivated us so that, as domestic churches, we would have the mission to defend and guard the faith and to propagate the invocation of the Virgin of Schoenstatt, which is still not so well known in Nicaragua, since we are the seeds that God has planted in Nicaragua so that they may germinate, teaching in the name of the Father, the Son and the Holy Spirit a message of salvation, carrying in our hearts the promise that God gives us, that He Himself will accompany us on this journey of the mission until the end of time.  He motivated us to work to transmit the faith to other families, so that they too can become home shrines. 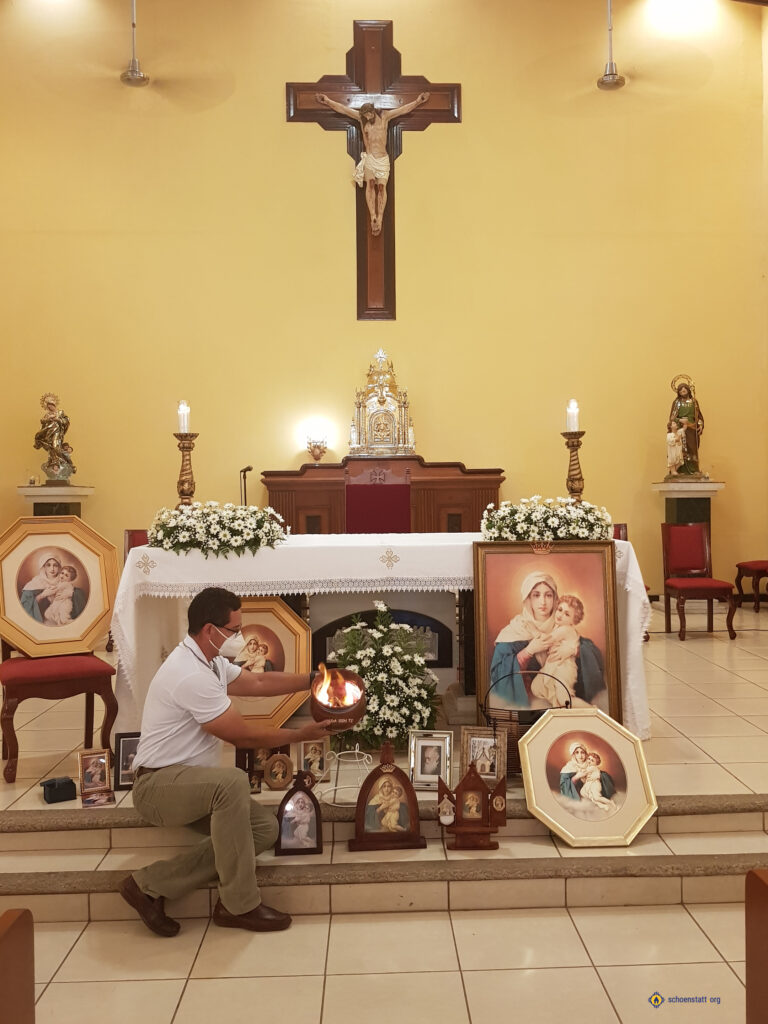