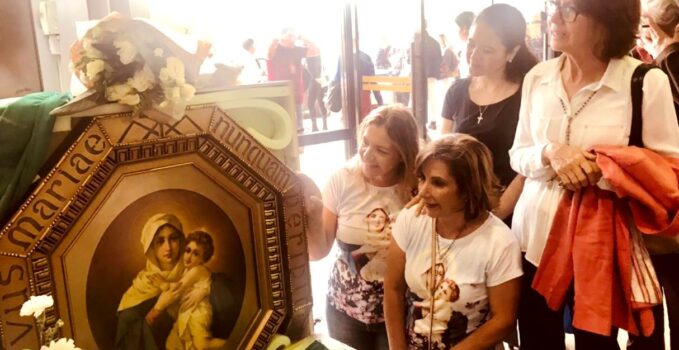 She Came to Bolivia, When We Needed Her Most

On October 23, the headlines in Bolivia predicted complicated days for the country. The city of Santa Cruz was completely blocked in protest by civilians, but the Schoenstatt Family of Santa Cruz proved once again that God’s plans are precise: Our human powers can plan many things, but he is the one who knows the perfect moment. —

The Committee for Liturgy and Contributions to the Capital of Grace had planned the reception of the picture of the Blessed Mother that came from Bellavista, Chile. They had prepared all the details: Documents for customs clearance, flowers, banners, a priest to celebrate Holy Mass and more. 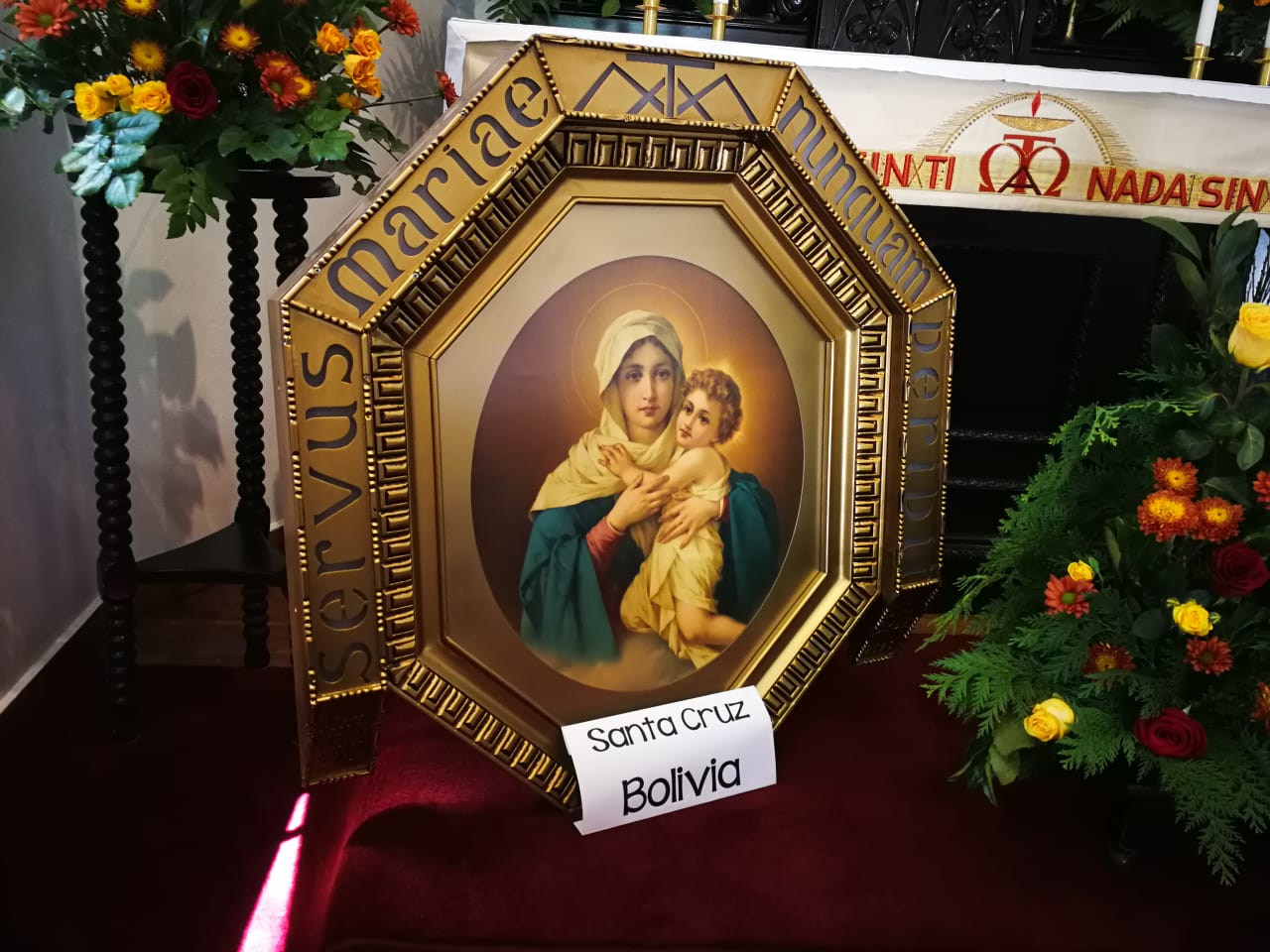 God’s plans are not always our own…

The flight from Santiago arrived at 6:30 a.m. and it was estimated that at 10:30 a.m. Holy Mass would be celebrated at the wayside shrine on the grounds of the new house of the Blessed Mother. Those of us who work were very disappointed with the plans because we would not be able to see our Blessed Mother until a few days later as all the events took place during working hours. However, she had planned things unexpectedly and in a completely different way.

The first signs that things would not go the way we had planned were evident when violent protests broke out in Santiago on October 18th. Flights were cancelled. Then in Santa Cruz, after the accusations of election fraud, it was decided to start an indefinite strike, which began on October 23rd at midnight, the day Our Lady came! These strikes are measures of peaceful protest, in which civilians take to the streets and block traffic. People take their role seriously, not allowing anyone to drive through. 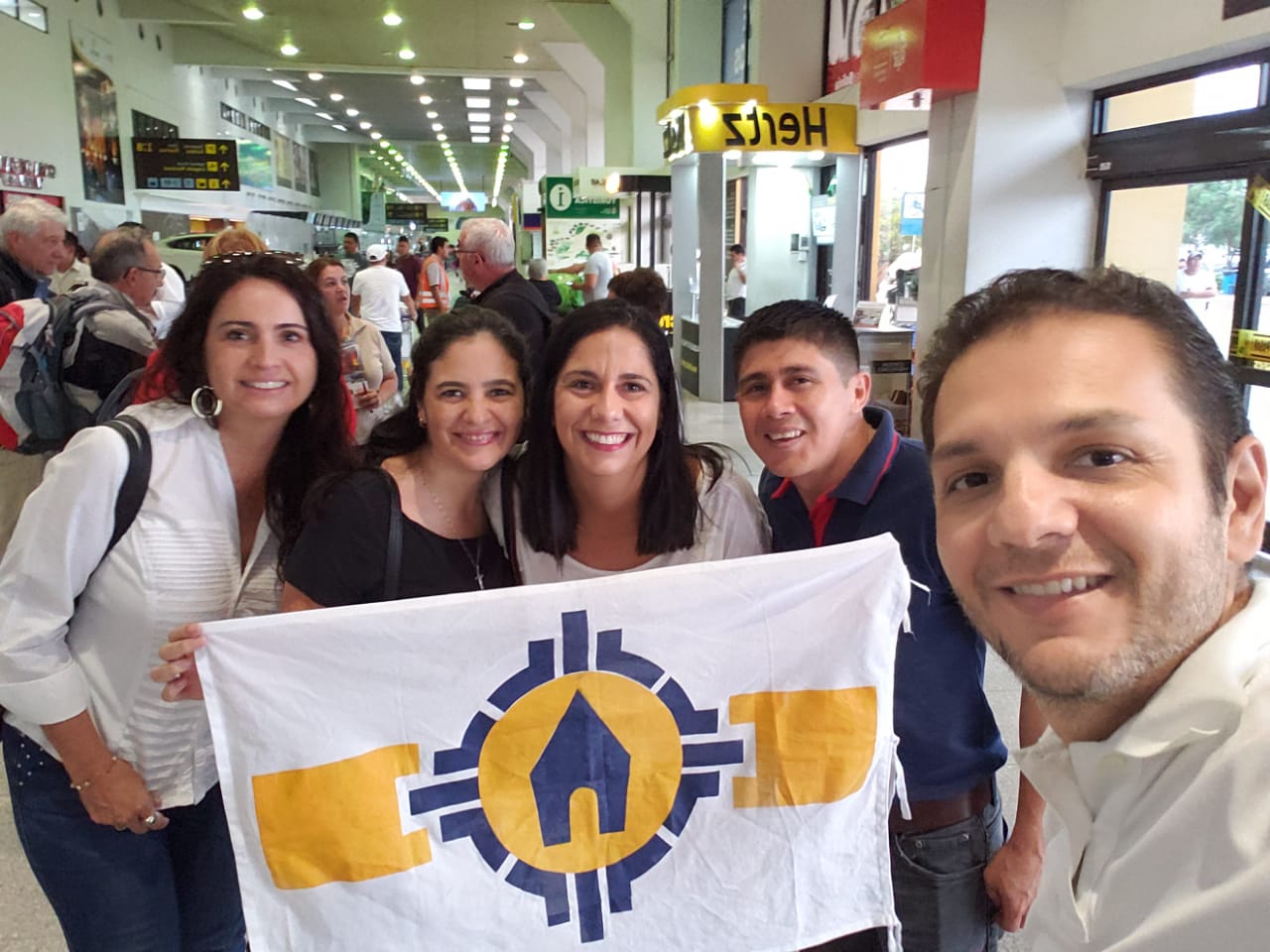 Waiting at the airport

Waiting a very special luggage to board

Roger and Maria Isabel Baldivieso were selected to bring the picture from Santiago. They had to spend many hours at the airport, but finally boarded at the scheduled time and arrived on time in Santa Cruz.

Roger told us about his trip in the following way: “It is incredible that when we arrive at Santiago airport, a small free baggage car waits for the Blessed Mother. Upon arrival at the airport in Santa Cruz, there is another free trolley in the customs room and so the Blessed Mother opens her way with small details. Needless to say, she did not pay any fees in Chile because of special dimensions and overweight. The Blessed Mother waited with us between two queues, as if she wanted to choose between the bad customs officer and the good customs officer; then one of them took a break, only the other one remained, and he asked what was in the big box.

When I showed him the video, he recognized the MTA immediately. And let her through.

In Bolivia, the customs officer opened the box and couldn’t stop shaking his head in surprise. When I asked him where I had to pay the import duty, he got very quiet, then he said: “No, come on, you don’t pay any duty”. 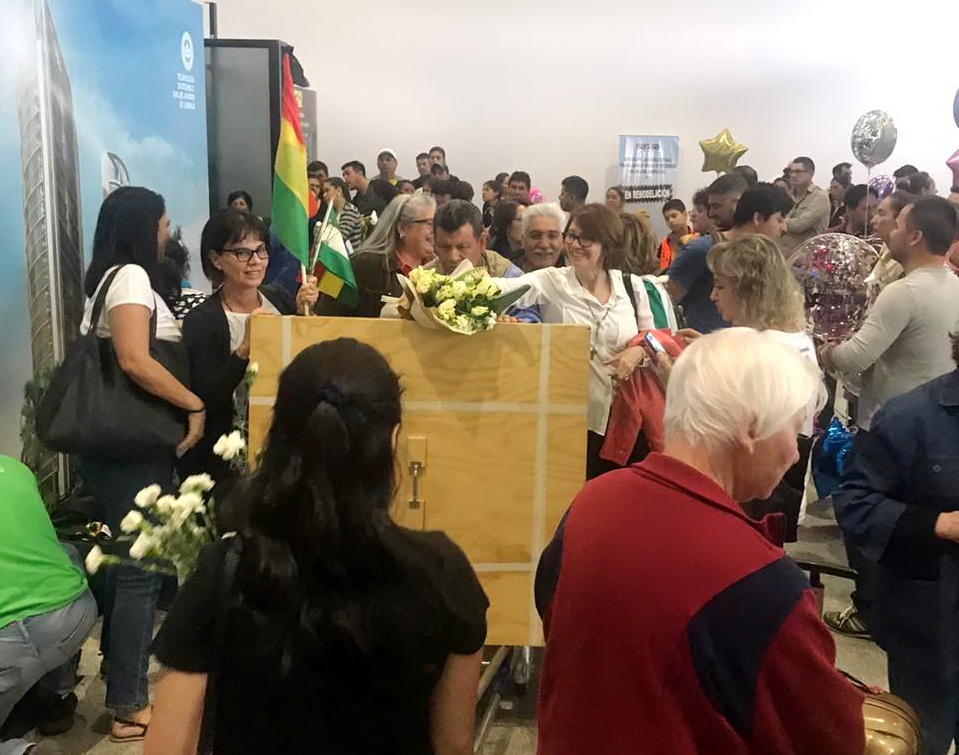 There were a large number of Schoenstatters, who had literally climbed the barricades and jumped to receive the Blessed Mother, on the side of the door where arriving passengers are expected. We spent the waiting time telling each other how we got through the barricades. Patricia Limpias, for example, had taken MTA pictures intermittently, got out of the car, distributed the pictures, and explained to the people that the Blessed Mother of Schoenstatt was coming to our country right now, where they needed it most. All those who blocked the access roads let us through when they understood that the Queen was calling us…

And so the story of this picture should begin. He arrives loaded with Chilean hope on Bolivian soil. A reading of the signs of the times with very strong symbolism. 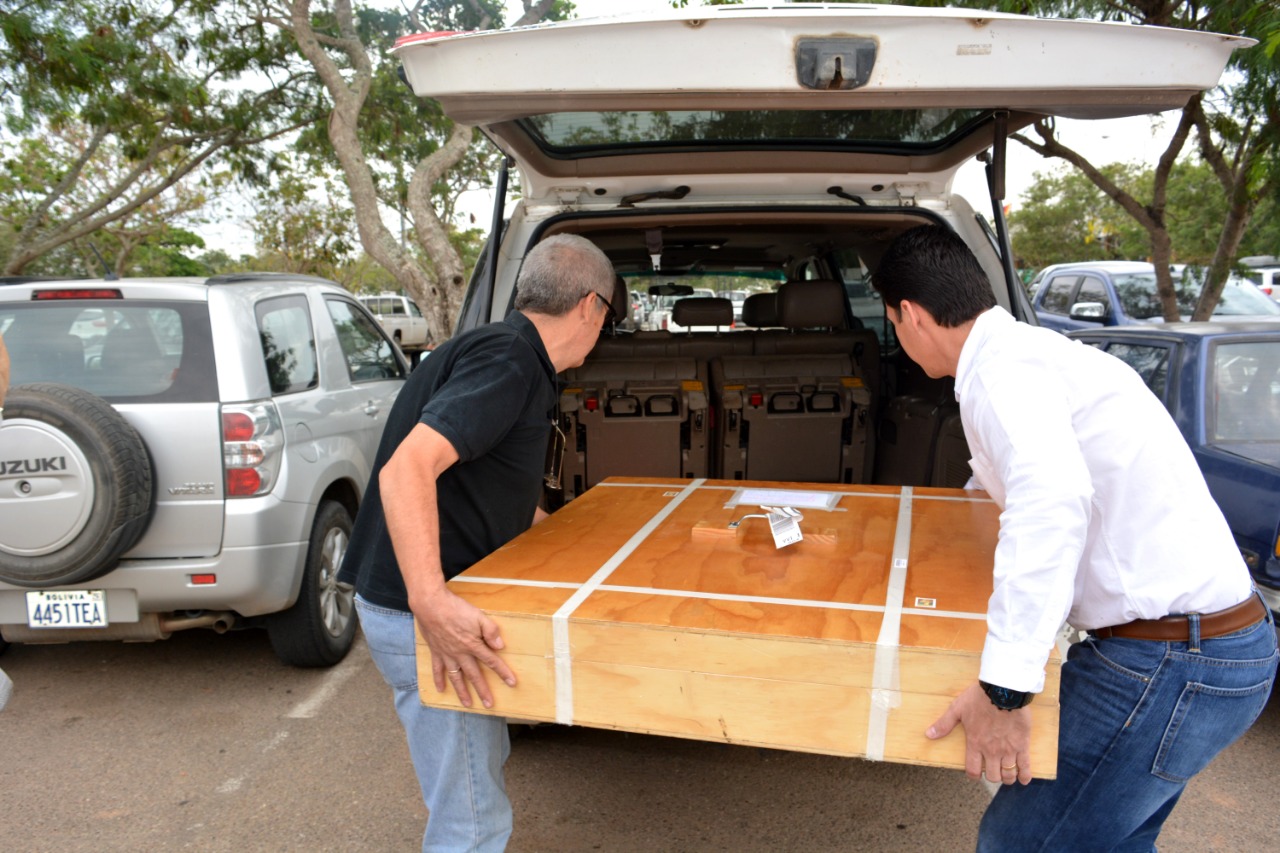 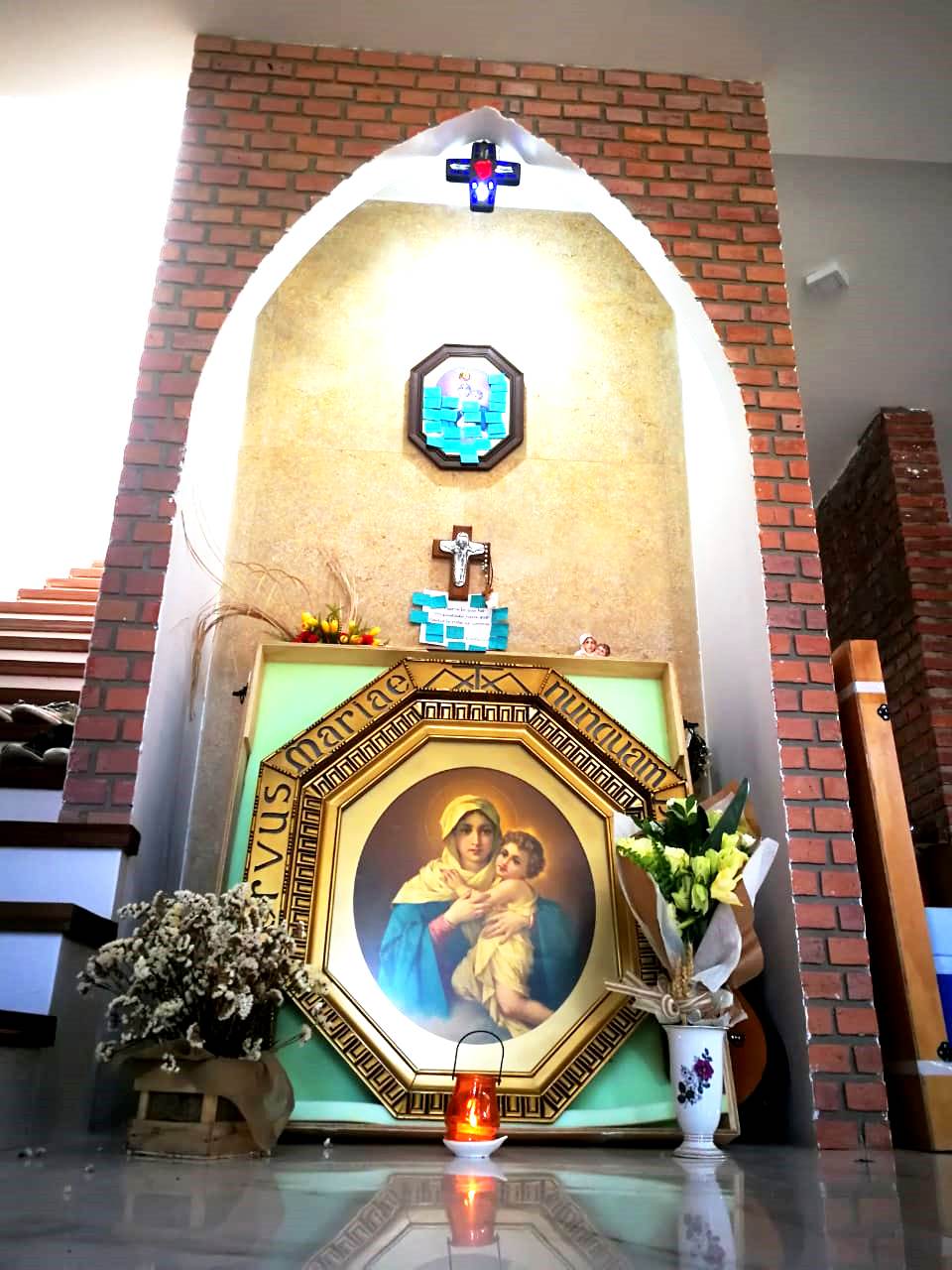