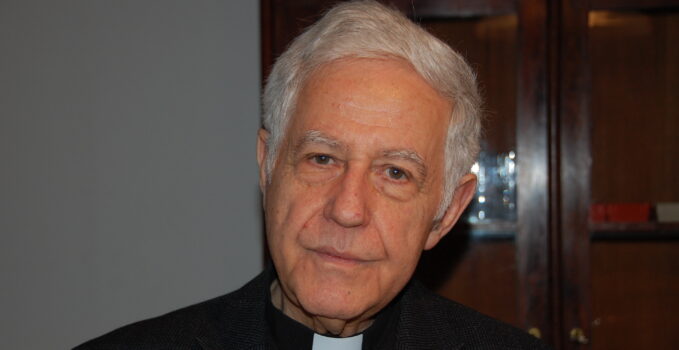 On 18 November, our Covenant Day and for a long time the day on which we celebrated Fr Kentenich’s birthday, Fr Angel L. Strada celebrated eighty years of his life, most of which was spent in serving Fr Kentenich and his work, and his beatification process. By no means less important was the process of getting to know and understand our Father and Prophet.—

“He is our big brother who captured us with his warmth and cordiality, his love for the Blessed Mother, his peace, his joy, but above all his vital picture of Fr Kentenich’s fatherhood”, commented Carlos Ricciardi, who got to know him in the 1970s in Argentina. “We see him and we see our Father. His gestures, his smile, his simplicity, his upright and fitting words, are some of the attributes God gave him. They served to conquer our hearts in Argentina, and in particular the Schoenstatters of La Plata, where he worked at the start of his priestly service.”

Just as Pope Francis can speak of Mary as God’s influencer, we are justified in talking about Fr Angel Strada as Fr Kentenich’s influencer. “Fr Angel Strada must be the person who best knew our Father and Founder because of all the research he did and lived as Postulator. In addition, he is one of the last generation of Schoenstatt Fathers who personally got to know Fr Kentenich”, Carlos Ricciardi said.

If we needed a comment from Fr Kentenich on this or that subject, and Fr Angel didn’t know it, then it didn’t exist. It’s as simple as that! If someone has had to read everything Fr Kentenich wrote and said, he will know him thoroughly. However, it would be a mistake to reduce Fr Angel to a Wikipedia on the life and teaching of Fr Kentenich.

What comes to my mind when I think of Fr Angel is his search for the “genuine Fr Kentenich”. He was persistent in no longer hiding the conditions of Fr Kentenich’s childhood as the son of a single mother, as well as the confrontation with parts of his difficult writings, and the human facets of a person who had to fight to follow his path, his mission and his sanctity.

“For the beatification process of Fr Kentenich I told myself that we have to give up a picture of our founder in which everything is perfect, so that his holiness was there right from the beginning. This Kentenich never existed”, he said during an interview in December 2016 shortly before he handed over his office as Postulator to his successor. “Many have said that showing the human features of our Father and Founder has helped them to appreciate him more. It is an obstacle to them if we create a myth about this founder. A one-sided emphasis on his heroic virtues and blameless life can sometimes be an obstacle to people and prevent them from identifying with him.”

A very happy birthday, Fr Angel Strada, and congratulations to Schoenstatt on having such an influencer for our Father!